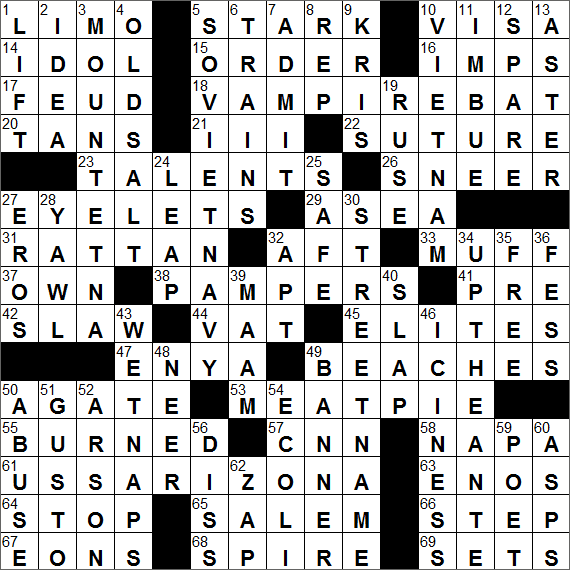 Theme: Up the Ante

Today’s themed answer are all written in the down-direction. Each includes the hidden word ANTE, written in THE UP-direction:

The word “limousine” actually derives from the French city of Limoges. The area around Limoges is called the Limousin, and it gave its name to a cloak hood worn by local shepherds. In early motor cars, a driver would sit outside in the weather while the passengers would sit in the covered compartment. The driver would often wear a limousin-style protective hood, giving rise to that type of transportation being called a “limousine”. Well, that’s how the story goes anyway …

18…One out for blood..VAMPIRE BAT

Vampire bats feed mostly in the blood of mammals, including humans. When they find a suitable “victim”, often one that is asleep, the bat usually lands close by and approaches its “meal” on the ground. It makes a small cut with its razor-sharp teeth and laps up the blood. The blood tends to flow freely as the bat’s saliva contains anticoagulants. Reports of bats biting the neck of humans are very rare in the real world, but the neck is the preferred location of attack in the fantasy world of vampires.

38…Babies, or what some babies wear..PAMPERS

Pampers is a Procter & Gamble brand of disposable diaper for babies and toddlers that was introduced in 1961.

The famous “Colonel” of Kentucky Fried Chicken fame was Harland Sanders, an entrepreneur from Henryville, Indiana. Although not really a “Colonel”, Sanders did indeed serve in the military. He enlisted in the Army as a private in 1906 at the age of 16, lying about his age. He spent the whole of his time in the Army as a soldier in Cuba. It was much later, in the 1930s, that Sanders went into the restaurant business making his specialty deep-fried chicken. By 1935 his reputation as a “character” had grown, so much so that Governor Ruby Laffoon of Kentucky gave Sanders the honorary title of “Kentucky Colonel”. Later in the fifties, Sanders developed his trademark look with the white suit, string tie, mustache and goatee. When Sanders was 65 however, his business failed and in stepped Dave Thomas, the founder of Wendy’s. Thomas simplified the Sanders menu, cutting it back from over a hundred items to just fried chicken and salads. That was enough to launch KFC into the fast food business. Sanders sold the US franchise in 1964 for just $2 million and moved to Canada to grow KFC north of the border. He died in 1980 and is buried in Louisville, Kentucky. The Colonel’s secret recipe of 11 herbs and spices is indeed a trade secret. Apparently there is only one copy of the recipe, a handwritten piece of paper, written in pencil and signed by Colonel Sanders. Since 2009, the piece of paper has been locked in a computerized vault surrounded with motion detectors and security cameras.

Brooke Baldwin is a TV journalist and news anchor. Anyone watching CNN’s coverage of Queen Elizabeth II’s Diamond Jubilee celebration in 2012 would have seen Baldwin hosting alongside Piers Morgan.

The USS Arizona Memorial in Pearl Harbor sits across the sunken hull of the battleship, the resting place of 1,102 out of 1,117 sailors of the Arizona who were killed during the 1941 attack. After the attack, the superstructure of the Arizona protruded above the surface of the water. This was removed during and after WWII, leaving just a submerged hull. The memorial itself was approved by President Eisenhower in 1958, and the building was opened in 1962. In 1999, the battleship USS Missouri was permanently moored in Pearl Harbor, docked nearby and perpendicular to the Arizona. It was on the Missouri that the Japanese surrendered, marking the end of WWII.

The Willamette River in northwestern Oregon is a major tributary of the Columbia River. The Willamette flows through the state capital of Salem, as well as through Portland, Oregon’s largest city.

The Baltic is a sea in northern Europe that is much less saline than the oceans. The lower amount of salt in the Baltic partially explains why almost half of the sea freezes over during the winter. In fact, the Baltic has been known to completely freeze over several times over the past few centuries.

In the fun TV show from the late seventies and early eighties, “Charlie’s Angels”, Farrah Fawcett-Majors played Jill Munroe. When Fawcett-Majors decided to move on from the show, a new character was introduced to fill her spot, her younger sister, Kris Munroe, played by Cheryl Ladd.

“The Deer Hunter” is a disturbing 1978 movie about three Russian Americans from Pennsylvania, and their time in the military during the Vietnam War. The “game” of Russian Roulette features prominently in the film’s storyline. According to director Michael Cimino, Robert de Niro requested that a live cartridge be loaded in the gun during the main Russian Roulette scene, to heighten the intensity of the atmosphere. Cimino agreed, although he was quite obsessive about ensuring that for each take, the bullet wasn’t next in the chamber.

“To imbue” is to pervade, to soak in. “Imbue” has the same etymological roots as our word “imbibe”.

Apparently, most aster species and cultivars bloom relatively late in the year, usually in the fall.

In the world of ballet, to perform an “entrechat” a dancer jumps into the air and rapidly crosses the legs before and behind.

In the myth of Cupid (aka Eros) and Psyche, the two title characters must overcome many obstacles to fulfill their love for each other. Overcome them they do, and the pair marry and enjoy immortal love.

“Wet nap” is a term commonly used for a “wet wipe”, a manufactured paper tissues that comes pre-moistened. They are often provided after a meal at some restaurants after a finger-food dish, or perhaps as a refresher on an airplane. I think the “nap” is short of “napkin”, and that “Wet-Nap” is a brand name.

“Gusto” is an Italian word meaning “taste”. We use it in English in the phrase “with gusto”, with great enjoyment.

The US Department of Agriculture (USDA) actually dates back to 1862 when it was established by then-president Abraham Lincoln. Lincoln referred to the USDA as the “people’s department” as our economy had such a vast agrarian base back then.

I always “zap” the commercials …

18…One out for blood..VAMPIRE BAT

21…Number in an outline, perhaps..III

38…Babies, or what some babies wear..PAMPERS

64…Remote button with a square..STOP

2…What a light bulb may mean..IDEA

34…Raise stakes in a game … and a hint to a hidden feature of five Down puzzle answers..UP THE ANTE