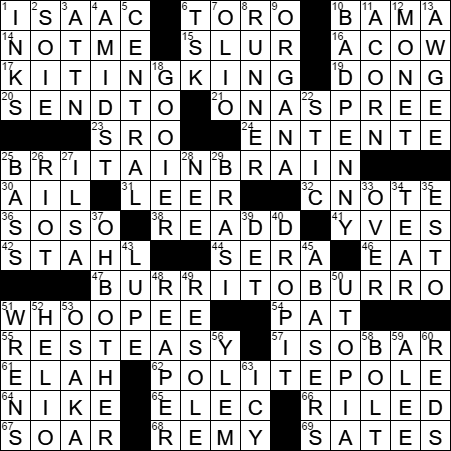 Each of today’s themed answers comprises two words. The second word of the answer is the first word with the letters “IT” DROPPED:

Sir Isaac Newton was one of the most influential people in history, the man who laid the groundwork for all of classical mechanics. The story about an apple falling on his head, inspiring him to formulate his theories about gravity, well that’s not quite true. Newton often told the story about observing an apple falling in his mother’s garden and how this made him acutely aware of the Earth’s gravitational pull. However, he made no mention of the apple hitting him on the head.

Toro is a manufacturer of mainly lawn mowers and snow removal equipment based in Bloomington, Minnesota. The company was founded in 1914 to build tractor engines.

Check kiting is illegal. The idea behind kiting is to write a check, even though there are insufficient funds to cover the amount. The con artist then writes another check, also with insufficient funds, from another bank’s account to cover the original check. I am not sure it would work nowadays, but then I am as honest as the day is long! Oh, and I think the term “kiting” comes from the older phrase “go fly a kite”, the idea being that the bad check is floated on air (non-existent funds).

An “entente cordiale” (sometimes just “entente”) is a friendly understanding, usually between two nations. The term, which translates from French as “cordial agreement”, was first used to describe a set of agreements between the UK and France that were put in place 1904.

“Sawbuck” is slang for a ten dollar bill. The term was applied to the bill as the Roman numeral X (which used to appear on the bill) resembles the end of sawhorse.

Lesley Stahl has worked on “60 Minutes” since 1991. She is married to author “Aaron Latham”. As a journalist, it was Latham who wrote the article that inspired the movie “Urban Cowboy”.

A burrito is a common dish served in Mexican cuisine, It is a flour tortilla filled with all sorts of good stuff. The term “burrito” is Spanish for “little donkey”, the diminutive of “burro” meaning “donkey”. It’s thought that the name was applied as a burrito looks like a bedroll or pack that might be carried by a donkey.

The wild donkey that we know as a burro was introduced into the Grand Canyon in the late 1800s, where they used the animal to help pack out mined copper, asbestos and lead. When the miners moved on, they left the burros to roam free. Feral burros essentially overran the Grand Canyon in subsequent years, leading to the forced removal of 500 of them in the early eighties by the National Park Service. Burros wreak havoc on the canyon’s ecosystem, and in particular compete with native bighorn sheep. The bighorn sheep population has rebounded since the number of wild donkeys has dropped.

Tommy Lee Jones is an actor from San Saba, Texas. Relatively recently, Jones received much acclaim for an excellent supporting performance as Congressman Thaddeus Stevens in “Lincoln”. However, my favorite of Jones’s performances were in 1993’s “The Fugitive” and in 2012’s “Hope Springs” opposite Meryl Streep.

“In the Valley of Elah” is a film starring Tommy Lee Jones, Susan Sarandon and Charlize Theron that was released in 2007. The movie tells of a military father searching for his son who recently returned from service in Iraq. On finding the son’s murdered body, the father then searches for the killers. The film is based on real events. The title “In the Valley of Elah” is a reference to the location where David killed Goliath according to the account in the Bible.

Gdańsk is a port city on the Baltic coast of Poland and is the country’s biggest seaport. Gdańsk was where the European Solidarity movement was born, with Lech Wałęsa in the leadership position. Wałęsa was an electrician working in the Gdańsk shipyards.

Remy Martin is my favorite brand of cognac (remember that when it’s my birthday!). In China, the name Remy Martin is not used, but rather the more colorful moniker, “man-headed horse”, describing the centaur logo on the bottle.

The phrase “a bad penny always turns up” might be restated in modern parlance as “what goes around comes around”. The essence of the idiom dates back centuries. The idea is that someone who creates a bad (counterfeit) penny will find himself or herself being cheated with the same coin before long.

French artist Claude Monet was one of the founders of the Impressionist movement, and indeed the term “Impressionism” comes from the title of his 1872 painting “Impression, Sunrise”. That work depicts the port of Le Havre, which was Monet’s hometown. Later in his life, Monet purchased a house in Giverny, and famously installed lily ponds and a Japanese bridge in the property’s extensive gardens. He spent two decades painting the water lily ponds, producing his most famous works.

The Japanese city of Osaka used to be called Naniwa, with the name changing to Osaka sometime before 1500. “Osaka” can be translated either as “large hill” or “large slope”. Osaka is sometimes referred to as “the Chicago of Japan” as it is a major center of commerce and industry. The city has also been named the “nation’s kitchen”, and was a center for Japan’s rice trade for centuries.

Back in the 1940s, cosmologists George Gamow and Ralph Alpher used the term “ylem” to describe the primordial plasma that was presumed to exist right after the Big Bang.

40. “That’ll be enough of that subject” … and a hint to solving the answers to starred clues : DROP IT