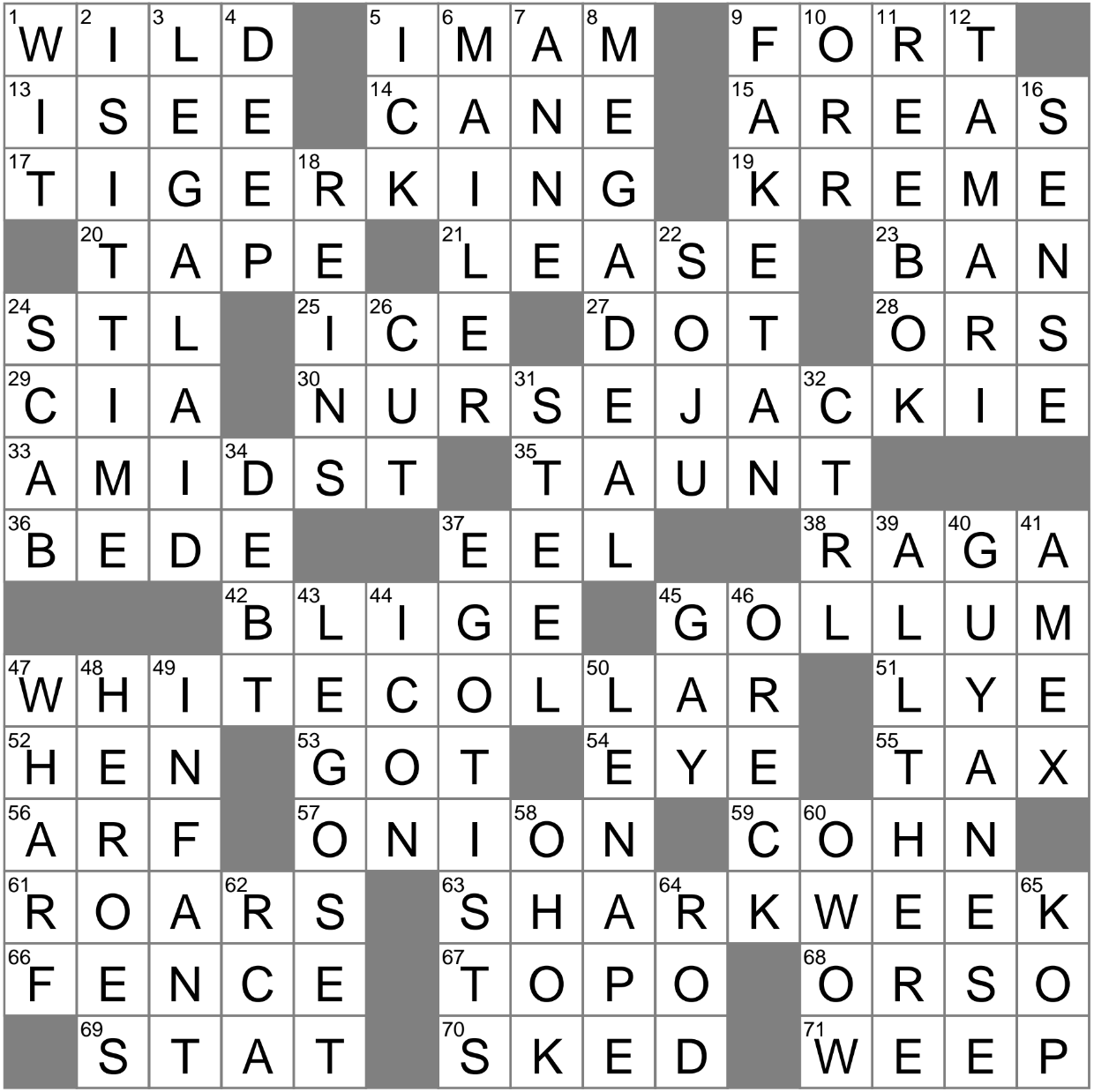 Themed answers each start with a type of shark:

“Tiger King” is a remarkable documentary about former zookeeper Joe Exotic who is accused of abusing and exploiting wild animals. Well, the first season broadcast was remarkable, but I hear that the second and third seasons really flopped.

The tiger shark is a massive predator, attaining an overall length of perhaps 15-16 feet. It has stripes running down the side of its body, hence the name “tiger”, but those stripes tend to fade with age. The tiger shark is responsible for more fatal attacks on humans other than the great white.

The CIA headquarters is located in Langley, Virginia in a complex called the George Bush Center for Intelligence. The facility was named for former Director of the CIA and US President George H. W. Bush.

“Nurse Jackie” is a comedy-drama series centered on an emergency room nurse at a hospital in New York City. The lead character is played by Edie Falco, who also played Tony Soprano’s wife on “The Sopranos”. I binge-watched “Nurse Jackie” a while back and found it to be a very well-written show …

The nurse shark has a relatively small mouth, and mainly suck in their food using a remarkable suction force. Notably, they have two fleshy extensions called barbels hanging down from either side of the nasal opening. The barbels are thought to aid in the detection of prey.

“Adam Bede” was the first novel written by the English writer George Eliot (aka Mary Ann Evans). It was published in 1859 and has been in print ever since then, for over 150 years.

Mary J. Blige is a singer-songwriter from the Bronx, New York. Her best known album is probably “My Life”, released in 1994. Blige is also making a name for herself as an actress, and was nominated for several awards for her performance in the 2017 film “Mudbound”.

45 Tolkien creature corrupted by the One Ring : GOLLUM

Tolkien introduced the character named Gollum in his 1937 novel “The Hobbit”. Gollum played amore central role in the sequel “The Lord of the Rings”. He was originally called Sméagol, and was given the name Gollum because of the “horrible swallowing noise in his throat”.

“White Collar” is a cop show that first aired in 2009. It stars Tim Dekay as an FBI agent and Matt Bomer as a very capable con artist, and the agent’s informer. Agent and informer make a deal to work together to apprehend white collar criminals.

The great white shark is one big fish, and can grow to over 21 feet long and weigh over 7,000 pounds. Great whites also live long lives, over 70 years. They have no natural predator, and are responsible for far more attacks on humans than any other shark species.

Linda Cohn is a sportscaster who started anchoring ESPN’s “SportsCenter” in 1992. When Cohn was in high school, she played hockey on the boys team.

63 Annual Discovery Channel programming event that could feature the shows in the answers to the starred clues? : SHARK WEEK

“Shark Week” is an annual event on the Discovery Channel, and has been so since 1987. The week is full of TV shows and specials that are shown with the stated intent of promoting awareness and respect for sharks.

A topographic map is one that illustrates land relief, the vertical and horizontal dimensions of the terrain. Typically, this is done using contour lines that show the steepness of slopes.

The exact etymology of “stat”, a term meaning “immediately” in the medical profession, seems to have been lost in the mists of time. It probably comes from the Latin “statim” meaning “to a standstill, immediately”.

The basso profondo (also “contrabass, basso profundo”) is the voice with the lowest vocal range. “Basso profonda” is Italian for “deep bass”.

Anne Moody was an author and civil rights activist whose best-known book is her 1968 memoir “Coming of Age in Mississippi”. It tells of her experiences growing up as an African-American female in a poor, rural area. The book deals with her struggles against racism amongst the white population, and sexism within the civil rights movement.

The most effective fake tans available today are not dyes or stains. Instead, they are sprays with the active ingredient dihydroxyacetone (DHA). DHA reacts chemically with amino acids in the dead layer of skin on the surface of the body. Sounds a little risky to me …

The brand name Reebok was adopted as the new company name for Foster Shoes of the UK in 1960. The name Reebok (more commonly “Rhebok”) is an Afrikaans word for an antelope, and comes from the term “roe buck”.

Tamari is a variety of soy sauce that is made without wheat, and so is often used by those on a gluten-free diet.

Soju is a Korean liquor traditionally made from rice, although other starches are also used these days. The name “sujo” translates literally as “burned liquor”.

Guyana’s official name today is the Co-Operative Republic of Guyana. Guyana is located on the northern coast of South America. The country used to be a British colony, with the name British Guyana, but it achieved independence in 1966. It is now the only member of the British Commonwealth (now called the Commonwealth of Nations) that is on mainland South America.

Roxane Gay is an author and contributing opinion writer for “The New York Times”. The list of her best-selling works includes the 2014 novel “An Untamed State”, the 2017 collection of short stories “Difficult Women”, and the 2017 memoir “Hunger”.

The Lenape Native American people lived along the Delaware River when Europeans first landed in the Americas. As a result of the enforcement of the Indian Removal Act 1830, most Lenape now live in Oklahoma, with significant numbers also in Wisconsin and Ontario.

RCA was founded in 1919 as the Radio Corporation of America, and as a wholly-owned subsidiary of General Electric (GE). GE divested RCA in 1932, and then reacquired the company in 1986. Today, RCA is just a brand name owned by Sony Music.