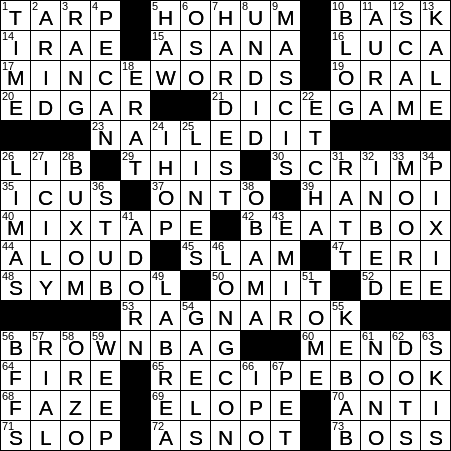 Themed answers each start with a direction one might come across in a RECIPE BOOK:

Walter Mosley is a novelist who is best known for his crime stories. HIs most famous works are a series of books featuring Los Angeles detective Easy Rawlins.

The Ho Chi Minh Mausoleum is a huge memorial to the former Vietnamese leader that is located at the center of Ba Dinh Square in Hanoi. The mausoleum’s design was inspired by Lenin’s Tomb in Red Square in Moscow. Ho Chi Minh’s embalmed body is on display in a central hall in a glass case and visitors file past it every day to pay their respects.

Even though tapes are no longer used, the term “mixtape” still describes any homemade collection of musical tracks. The less retro term for the same thing might be “playlist”.

Beatboxing is a form of vocal percussion in which a performer primarily mics a drum machine. Today, beatboxing is largely associated with hip-hop music, although similar forms of vocal percussion have been around for a while. Actor Gert Fröbe, famous for playing Bond villain Auric Goldfinger, did some pseudo-beatboxing in the 1965 movie “Those Magnificent Men in their Flying Machines”.

A poetry slam is a competition in which poets read their own work (usually), with winners being chosen by members of the audience. Apparently the first poetry slam took place in Chicago in 1984. Now there is a Nation Poetry Slam that takes place each year, with representatives from the US, Canada and France.

53 Norse mythology upheaval used as the subtitle of a 2017 “Thor” film : RAGNAROK

“Ragnarök” is the name given to a set of events in Norse mythology that resulted in the deaths of many famous gods, including Odin and Thor.

“Life” magazine was founded way back in 1883, and was originally structured as a humorous publication. It changed hands in 1936, when it was repurposed as a magazine with an emphasis on photojournalism. I am a big fan of the latter format, and have quite a few favorite issues in my private collection …

Dinosaur Jr. is a rock band from Amherst, Massachusetts that formed in 1984. The band’s original name was “Dinosaur”, but they had to change it to “Dinosaur Jr.” after being sued by the supergroup named “The Dinosaurs”.

The main ingredients in succotash are corn and lima beans, although in parts of the South, succotash can be made with any collection of vegetables prepared with lima beans and topped with butter.

Ratt is a rock band based in Los Angeles. Ratt was formed out of a San Diego group called Mickey Ratt.

Archie Moore was a professional boxer from Benoit, MIssissippi who was raised in Saint Louis, Missouri. Moore was nicknamed “the Old Mongoose” and managed to knock out 131 opponents over a long career, which is more than any other professional boxer..

“Becoming” is a 2018 autobiographical memoir by former First Lady Michelle Obama. After “Becoming” was published in November 2018, it took just 15 days for it to break the record for copies sold of any book in the US that year.

Falafel is a ball of ground chickpeas or fava beans that has been deep fried and served in pita bread. I love chickpeas, but falafel is often too dry to me …

Rial is the name of the currency of Iran (as well as Yemen, Oman, Cambodia and Tunisia). Generally, there are 1,000 baisa in a rial.

In baseball, a no-hitter (colloquially “no-no”) is a game in which one team fails to record even a single hit. No-hitters are pretty rare, and only occur about twice a year in Major League Baseball.

A tittle is a small diacritical mark used in writing. Examples are the cedilla and tilde used in some languages, and the dot over the lowercase letters i and j in English.