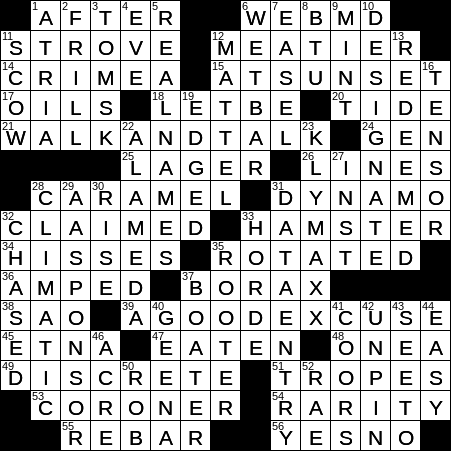 WebMD is a website containing health information. Online since 1996, WebMD is read by over 80 million readers each month. One example of the useful features on the site is the “Pill Identification Tool”.

Crimea is a peninsula jutting out into the Black Sea that is almost completely surrounded by water. It is connected to the Ukrainian mainland to the north by the Isthmus of Perekop, and is separated from the nearby Russian region of Kuban by the narrow (less than 10 miles) Kerch Strait. Crimea has been occupied by foreign powers many times over the centuries, and now control of the region is disputed by Ukraine and Russia.

28. Product of sugar and heat : CARAMEL

32. Retrieved at an airport carousel : CLAIMED

33. Pet holdable in one hand : HAMSTER

Borax is also known as sodium borate, and is a salt of boric acid. Borax is a white powder that dissolves easily in water. The compound has many uses, for example as an antifungal agent, water-softening agent and as an antiseptic. Actor and future US president Ronald Reagan used to tout 20 Mule Team Borax that was used as a laundry product.

Brazil is the largest country in South America, and the fifth largest country in the world (after Russia, Canada, China and the US). Brazil was a Portuguese colony from 1500 to 1815. The official name of the country under Portuguese rule was Terra da Santa Cruz (Land of the Holy Cross). However, European sailors used the name Terra do Brasil (Land of Brazil), a reference to the brazilwood tree that was much prized in Europe for the deep red dye that it produced.

The term “coroner” is derived from the Latin “custos placitorum coronae”, which was once the title of the officer responsible for protecting the property of the royal family (“corona” is Latin for “crown”). Over time, the responsibilities of the office narrowed and changed until by the 17th century, the main task was to determine the cause of death in cases not obviously natural.

A steel bar or mesh that is used to reinforce concrete is called “rebar”, which is short for “reinforcing bar”.

Tomsk is one of the oldest towns in Siberia, having been founded in 1604. The city gets its name from the Tom River on which it is situated.

John Wayne was named Marion Mitchell Morrison at birth, after his grandfather who was a Civil War veteran. When young Marion was a little boy, a local fireman used to call him “Little Duke” because he was always seen walking with his large dog called “Duke”. Marion liked the name “Duke” and so he called himself Duke Morrison for the rest of his life. That said, Duke Morrison also used John Wayne as a stage name.

“Alameda” is Spanish for “a place full of poplars”. There are number of locations in the US and elsewhere with the name “Alameda”, including the county of Alameda, California where I am right now, writing this post. Alameda County is also home to the city of Alameda located on Alameda Island.

Klymaxx is an all-female R&B band that first got together in 1979 in Los Angeles. The group’s biggest hit was “I Miss You”, a 1985 song composed Klymaxx keyboardist Lynn Malsby.

28. Of concern to the Weather Channel : CLIMATIC

The Weather Channel opened for business in 1982 and has been broadcasting weather forecasts and weather-related news stories 24 hours a day since then.

Alcoholics Anonymous (AA) was founded in 1935, by Bill Wilson and Dr. Bob Smith in Akron, Ohio. As the organization grew, the guiding principles established by the founders were formatted into a 12-step program that was in place by the forties.

40. Davis with a recurring role on “Grey’s Anatomy” : GEENA

Coors Field in Denver is home to the Colorado Rockies MLB team. Coors Field used to give up the most home runs in the league, due to low air density and dry air at Denver’s high elevation. The number of home runs has dropped dramatically since 2002 when officials began to store game balls in a high-humidity environment.