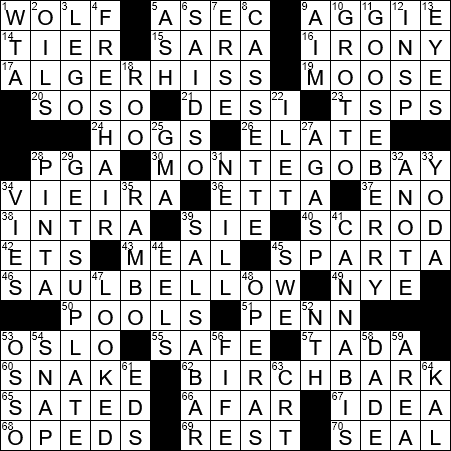 Today’s Theme (according to Bill): Animals Heard at the End

Today’s themed answers come in pairs. One element of the pair ends with the sound made by the other element:

The actress Sara Gilbert grew up playing Darlene on the sitcom “Roseanne” from 1988 to 1997. Today Gilbert appears fairly often on another hit sitcom, namely “The Big Bang Theory”. You can also see her on the daytime talk show called “The Talk”, a show that she herself created. And, she made a comeback as Darlene in 2018 in the “Roseanne” reboot(s).

Alger Hiss was a US government official involved in the establishment of the United Nations. Hiss was accused of being a spy in testimony to the House Committee on Un-American Activities (HUAC) in 1948. Hiss vigorously denied and fought the accusation but eventually served over three years in jail on related charges. The consensus seems to be that Hiss was indeed a spy, but there may be new evidence available when the HUAC’s papers are unsealed in 2026.

Desi Arnaz has two stars on the Hollywood Walk of Fame. One was placed to mark his contribution motion pictures, and the other for his work in television.

Montego Bay is the second largest city on the island of Jamaica, after the capital Kingston. Montego Bay is a popular tourist destination, with many cruise ships stopping there.

Intramural sports are conducted within a certain geographic area, as opposed to varsity sports which are played with teams outside that area. The term “intramural” comes from the Latin for “within walls” and first applied to events held between teams based within the walls of a city.

“Humboldt’s Gift” is a Pulitzer-winning 1975 novel by Saul Bellow. The novel is somewhat autobiographical in that it describes Bellow real-life friendship with poet Delmore Schwartz, through the fictional relationship of the two writers in the story.

Penn Jillette is one half of the duo of magicians known as Penn & Teller (Penn is the one who talks). Penn teamed up with Teller on stage in 1981, having met him through a friend back in 1974. As well as being talkative onstage, Penn is very vocal offstage when it comes his causes and beliefs. He is a devout atheist, a libertarian and a supporter of free-market capitalism.

You don’t see gooseberries very much over here in the US, but they grew wild in Britain and Ireland when I was growing up. Gooseberry pies and jams were very popular.

Like most of the characters in A. A. Milne’s “Winnie the Pooh”, the kangaroo named “Roo” was inspired by a stuffed toy belonging to Milne’s son Christopher Robin.

28 Sailing companion of the Niña : PINTA

Sam Neill is a very talented actor from New Zealand, although he spent the first few years of his life in Northern Ireland. I really enjoyed Neill in a 1983 television miniseries called “Reilly, Ace of Spies”, about a British spy operation during WWI. He is perhaps better-known for his roles in the movies “Omen III”, “Dead Calm”, “Jurassic Park” and “The Hunt for Red October”.

“First Blood” was the original of the four “Rambo” films starring Sylvester Stallone as John Rambo, a troubled Vietnam War veteran. I thought “First Blood” was a pretty good film actually, but the sequels were terrible, and way too violent for me. But, action all the way …

The residents of Florida’s Dade County voted to change its name to Miami-Dade County in 1997, in recognition of its most populous and recognized city.