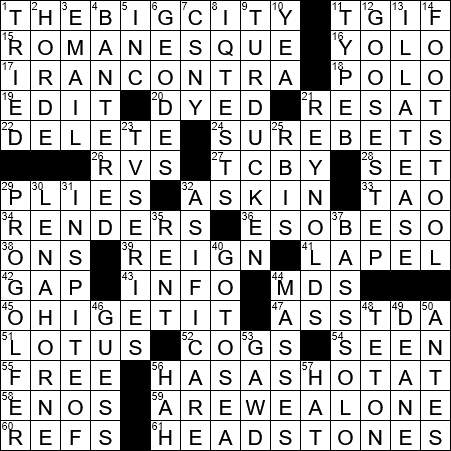 Romanesque architecture is a style that was a precursor to Gothic architecture, and had its heyday in medieval Europe. Romanesque buildings are often quite massive, have thick walls, round arches and large towers. When compared to the ornate Gothic style, Romanesque is seen to be relatively simple and plain. A classic example of the style would the Tower of London, especially the White Tower that sits at the center of the structure.

“Carpe diem” is a quotation from Horace, one of Ancient Rome’s leading lyric poets. “Carpe diem” translates from Latin as “seize the day” or “enjoy the day”. The satirical motto of a procrastinator is “carpe mañana”, “translating” as “seize tomorrow”.

The Iran-Contra affair (also called “Irangate”) came to light in 1986. The “Iran” part of the scandal was the sale of arms to Iran by the Reagan administration, initially to facilitate the release of US hostages. This was done in secret largely because there was ostensibly a US arms embargo in place against Iran. The “Contra” part of the scandal arose when the man in charge of the operation, Oliver North, took funds from the arms sales and funneled the cash to the Contra militants who were fighting to topple the government in Nicaragua.

Pinkberry is a chain of frozen dessert outlets that is based in Scottsdale, Arizona. Pinkberry’s desserts were originally marketed as frozen yogurt, but that description didn’t fit with criteria laid down by the State of California. After a hiatus of a few years, apparently the “yogurt” moniker is in use again.

A “horde” is a large crowd. “Horde” ultimately derives from the Turkish “ordu” that means “camp, army”.

A geode is a rock in which there is a cavity that is lined or filled with crystal formations.

Reynolds Metals is the leading manufacturer of aluminum foil in North America. The consumer brand of foil is sold as Reynolds Wrap. The technology behind Reynolds Wrap was apparently developed for packaging tobacco.

The FedExCup is a championship trophy that has been awarded since 2007 to golfers on the PGA Tour. Players win points throughout the season, with those earning the most points entering into playoff tournaments at the end of the season.

Lena Horne was an American jazz singer, actress, dancer and civil rights activist. Horne started out her career as a nightclub singer and then began to get some meaty acting roles in Hollywood. However, she ended up on the blacklist during the McCarthy Era for expressing left wing political views. One of Horne’s starring roles was in the 1943 movie “Stormy Weather” for which she also performed the title song.

Teton County, Wyoming is home to the Grand Teton National Park and the town of Jackson Hole. Teton has the distinction of having the second highest personal per capita income of any county in the US ($94,672 in 2010), second only to New York County ($111,386 in 2010).

Silas Deane was a member of the Continental Congress. When Deane was dispatched to Paris by the Congress, he became America’s first foreign diplomat. His amazing story is told in Joel Richard Paul’s book called “Unlikely Allies”.

I think the reference is to the banded hat worn by the Mad Hatter in “Alice’s Adventures in Wonderland”.