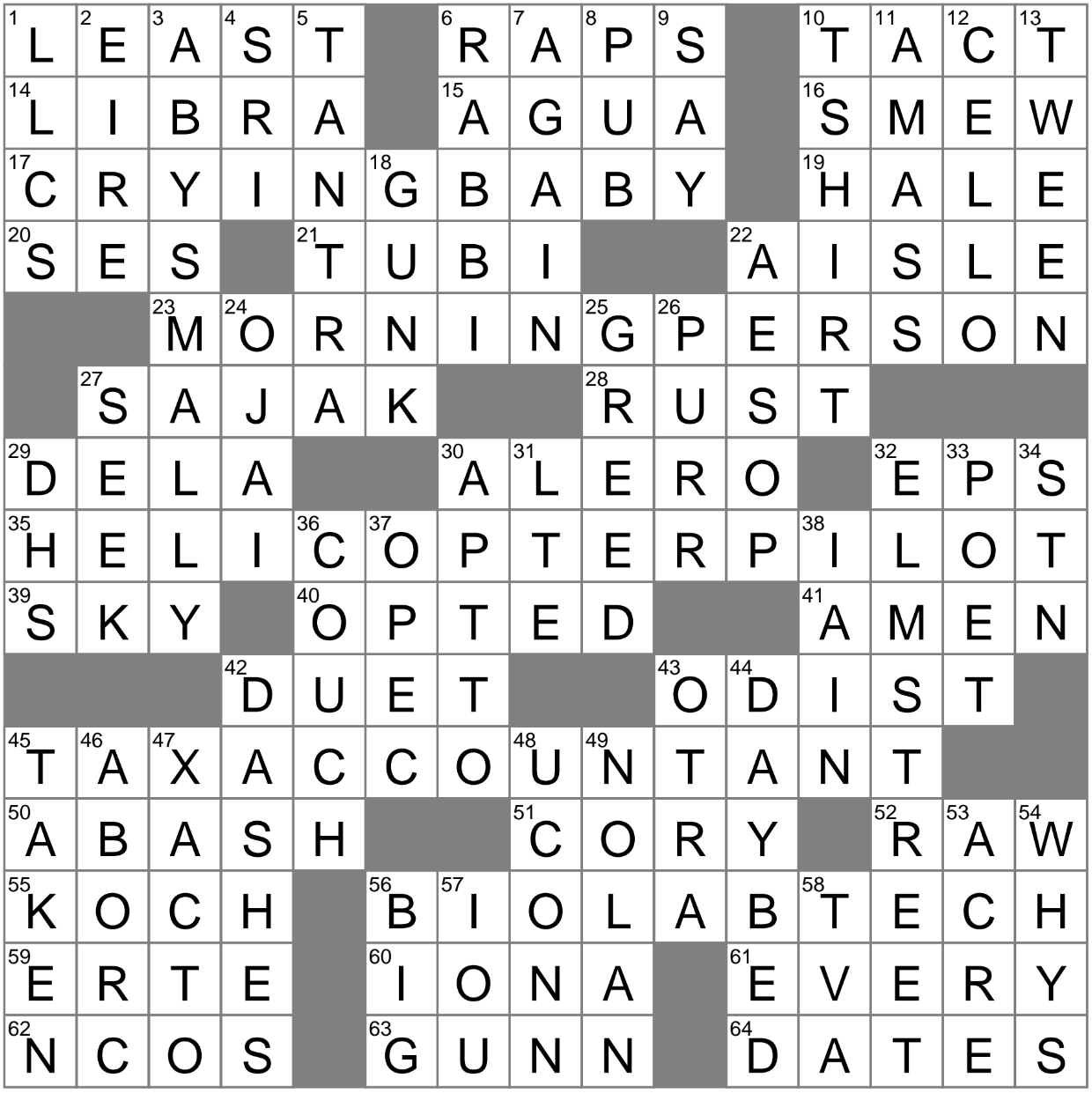 Today’s Theme (according to Bill): A Singular Puzzle

Themed answers are reinterpretations of common phrases ending in “ONE”:

The Agua Fria River runs from a spot near the city of Prescott, Arizona south through the Agua Fria National Monument and into Lake Pleasant located near Peoria, Arizona. “Agua Fria” translates from Spanish as “Cold Water”.

The smew is a beautiful-looking species of duck found right across northern Europe and Asia. The smew requires trees to complete its breeding cycle as it nests in tree holes, such as old woodpecker nests.

Tubi is an ad-supported streaming service that was launched in 2014. Programs available from Tubi include both films and TV series. Program availability increased in 2020 when Tubi was purchased by Fox Corporation, for $440 million.

30 Last of the Oldsmobiles : ALERO

The Alero was the last car made by General Motors under the Oldsmobile brand. It was produced from 1999 to 2004.

Cory Booker has been a US Senator for New Jersey since 2013, having previously served as the Mayor of Newark. Booker is one of the few vegetarians in the US Congress.

Steak tartare was first served in French restaurants in the early 1900s. Back then, the dish went by the name “steak à l’Americaine”, would you believe? It was basically raw, seasoned beef mixed with egg yolk. A later version of l’Americaine, without the egg yolk and with tartar sauce served on the side, was dubbed “steak tartare”. Over time the two versions became one, and the steak tartare moniker won out. By the way, if you order steak tartare in Switzerland, I believe you are served horse meat. There are now similar “tartare” dishes made with raw salmon, or raw tuna.

Astronaut Christina Koch served on the International Space Station in 2019/2020, and broke the record for the longest continuous stay in space (328 days).

Although the small island of Iona lies just off the west coast of Scotland, it was the site of a monastery built in the Middle Ages by a monk from Ireland named Colm Cille (also known as Columba). Colm Cille and his followers were sent into exile from the Irish mainland and settled in Iona, as at that time the island was part of an Irish kingdom. This monastery in Iona expanded its influence over the decades and founded other institutions all over Ireland and Great Britain. It is believed that the famous Book of Kells may have been written, or at least started, at the monastery on Iona. Iona is also the burial site for Macbeth, King of Scotland who was immortalized in Shakespeare’s fictional account of the king’s life.

James Gunn has directed a lot of superhero films, including the “Guardians of the Galaxy” series produced by Marvel Studios. In 2022, DC Studios hired Gunn as co-chairperson and co-CEO alongside Peter Safran. For several years, Gunn was married to actress Jenna Fischer (from “The Office”).

2 Word with a harp on some euro coins : EIRE

Shabbat is the day of rest in the Jewish tradition, and is observed weekly from Friday evening through Saturday evening. Shabbat is welcomed a few minutes before Friday’s sunset, according to Jewish law, and bid farewell on Saturday night after the appearance of three stars in the sky.

A pub crawl (also “bar-hopping”) is a tour of a selection of local public houses. One usually takes one drink at each stop, which might perhaps explain the use of the word “crawl” …

CafePress is an online retailer that specializes in supplying user-customized items, items such as t-shirts, bags, clocks, mugs and calendars.

12 Instrument with an end pin : CELLO

The “spike” at the bottom of a cello or double bass is known as an endpin. It contacts the floor and supports the instrument’s weight. Prior the introduction of the endpin in the mid-1800s, a cello would be held tightly between the legs by the musician. This was practically impossible for woemn, due to the volumous dresses worn at the time. So, the endpin is credited with the iincrease in popularity of the cello with female musicians.

22 Storyteller credited with the fable “The Wolf and the Crane” : AESOP

In Aesop’s fable “The Wolf and the Crane”, a wolf gets a small stuck in his throat while feeding. He begs for help from several animals, but only the crane will help. The crane uses its long bill to remove the bone, and asks for his reward. The wolf tells the crane that his reward is the fact that he was able to put his head in the mouth of a wolf and survive. Very ungrateful …

The city of Ojai, California is located just northwest of Los Angeles. One of the city’s claims to fame is that according to the TV shows “The Bionic Woman” and “The Six Million Dollar Man”, Jaime Sommers and Steve Austin grew up in Ojai and were childhood sweethearts!

Baseball’s American League (AL) allows a designated hitter (DH) in each team’s lineup, whereas the National League (NL) does not.

Ada Limón was named US Poet Laureate in 2022. Here is her poem “Field Bling”, which comes from her 2015 collection “Bright Dead Things”:

Nights when it’s warm
and no one is watching,
I walk to the edge
of the road and stare
at all the fireflies.
I squint and pretend
they’re hallucinations,
bright made-up waves
of the brain.
I call them,
field bling.
I call them,
fancy creepies.
It’s been a long time
since I’ve wanted to die,
it makes me feel
like taking off
my skin suit
and seeing how
my light flies all
on its own, neon
and bouncy like a
wannabe star.

The Organization of the Petroleum Exporting Countries (OPEC) was founded in 1960 at a conference held in Baghdad, Iraq that was attended by Iraq, Kuwait, Iran, Saudi Arabia and Venezuela. Nine more countries joined the alliance soon after, and OPEC set up headquarters in Geneva, Switzerland and then Vienna, Austria in 1965. The basic aim of OPEC was to wrest control of oil prices from the oil companies and put it in the hands of the sovereign states that own the natural resource.

Iain Armitage is a child actor perhaps best known for playing the title character in the sitcom “Young Sheldon”.

The X-Acto knife was invented in the thirties by a Polish immigrant, although his intention was to come up with a scalpel for surgeons. The knife couldn’t cut it as a scalpel though (pun!), because it was difficult to clean. The inventor’s brother-in-law suggested it be used as a craft knife, and it is still around today.

48 NCAA school with the most first-round WNBA draft picks : UCONN

British director Christopher Nolan is best known for “rescuing” the floundering Batman movie franchise. In that series, Nolan directed “Batman Begins” and “The Dark Knight”. He was also at the helm of a couple of sci-fi movies that I really enjoyed, namely “Inception” (2010) and “Interstellar” (2014).

“Dunkirk” is a 2017 film about the evacuation of Allied troops from Dunkirk during WWII. Directed and written by Christopher Nolan, “Dunkirk” has been praised for how realistic it is in depicting the conditions and events that took place on that day.