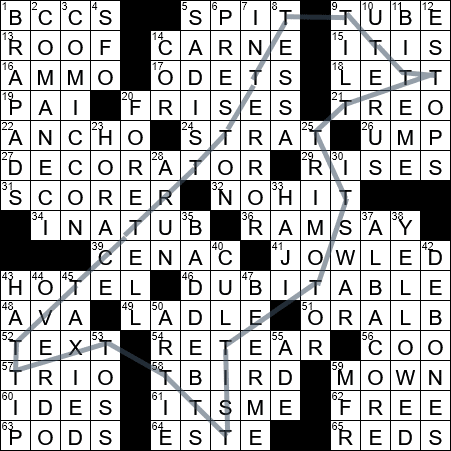 We join the 21 letters T in the grid, and that draws the outline of a BIRD:

15 Words that can precede and follow “what” : IT IS

Clifford Odets was a playwright, screenwriter and director from Philadelphia. “Waiting for Lefty” was the first play by Clifford Odets that made it to stage, in 1935. The storyline deals with cab drivers who are planning a strike. Famously, the play breaks through the “fourth wall” by placing actors within the audience who react to the action taking place on the stage.

Ajit Pai is a lawyer who was appointed to the Federal Communications Commission (FCC) by President Obama, and who was designated the FCC’s chairman by President Trump. Pai is seen by most as the person behind the repeal of the Net neutrality rules put in place by the Obama administration.

The breed of dog known as a Bichon Frisé is characteristically small and fluffy.

The Treo is a smartphone that was originally developed by a company called Handspring. Handspring was bought by Palm Inc. Subsequently, the Treo was phased out and replaced by the Palm Pre.

An ancho is a dried poblano pepper that is used in Mexican cuisine. The poblano is a mild chili.

The Stratocaster (often “Strat”) is an electric guitar made by Fender since 1954. The company that made Fender electric guitars was founded in Fullerton, California in 1946 by Leo Fender.

34 How some nursery-rhyme men traveled : IN A TUB

Gordon Ramsay is a celebrity chef from Scotland who appears more on US television now than he does on British TV. Personally, I think the man is pretty obnoxious.

Wyatt Cenac is a comedian and writer from New York City who was raised in Dallas. Cenac worked for three years as a writer for the TV show “KIng of the Hill” before joining “The Daily Show with Jon Stewart” as writer and correspondent.

“People of Earth” is a sci-fi comedy show on TBS. It’s all about a support group for alien abductees, as well as some of the aliens that did the abducting.

In the game of Monopoly, one can purchase a hotel by “demolishing” four houses and by paying an extra amount equal to the price of one house.

Something dubitable is open to question, open to “doubt”.

Beethoven’s “Piano Trio in B-flat major, Op. 11” was written and 1797, when the composer was still in his twenties. It is scored for piano, clarinet (sometimes violine) and cello (sometimes bassoon). The work also goes by the nickname “Gassenhauer Trio”.

58 Classic car … and a hint to the hidden image you can draw using 21 identical squares in this grid : T-BIRD

Ford manufactured the Thunderbird (T-Bird) from 1955 to 2005. Originally a two-seater sporty convertible, the T-Bird was introduced as a competitor to Chevrolet’s new sports car, the Corvette.

“Ferrara” is the name of a province and its capital city in northern Italy. The city is located just 30 miles northeast of Bologna. The city was also home to a branch of the princely House of Este during the 14th and 15th centuries.

Vulcans are an alien race in the “Star Trek” franchise. The most famous (half-) Vulcan is Spock, played by Leonard Nimoy. Spock’s father is a Vulcan, and his mother is human.

San Francisco International Airport (SFO) served as the main base of operations for Virgin America (sold to Alaska Airlines), and is also the maintenance hub for United Airlines.

Carrie Preston is an actress from Macon, Georgia who plays Elsbeth Tascioni, a wonderful character on the TV show “The Good Wife” and its sequel “The Good Fight”.

Tessa Virtue is a Canadian ice dancer who won the 2010 and 2018 Olympic gold along with her partner Scott Moir. Virtue and Moir have been skating together since 1997, when they were seven and nine years old respectively. That makes them the longest-standing Canadian ice dance team in history.

Horace Mann was Massachusetts politician, and the first Secretary of the Massachusetts State Board of Education. Mann made sweeping educational reforms in the state, with other states around the country adopting many of the policies he developed. Such was his influence that he is known by historians as the “Father of the Common School Movement”. And as an aside, Mann was brother-in-law to author Nathaniel Hawthorne.

A fillet is a boneless cut of meat or fish. The term comes from the Old French “filet” meaning “small thread, filament”. Apparently we applied the term to food as the piece of fish or meat was tied up with string after it was boned. Here in the US, we tend to use the French spelling “filet”.

Cornhole is a game in which contestants throw bean bags towards a tilted-up platform with a hole in it. Bags that land in the hole score 3 points, and bags that land on the board score 1 point.