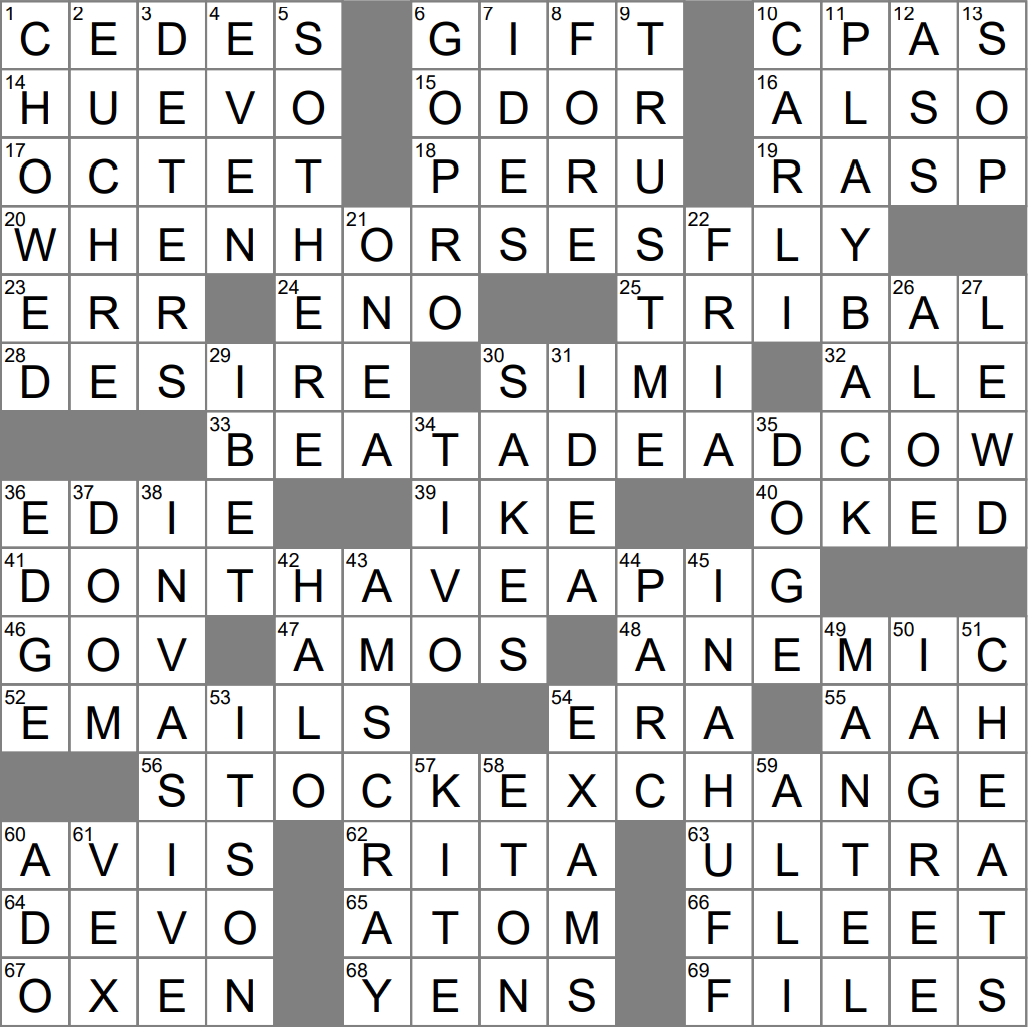 Themed answers are common phrases including an animal, but that animal has been EXCHANGED for another:

10 Pros unlikely to use vacation time in April : CPAS

20 *Era known for Pegasus and other winged stallions? : WHEN HORSES FLY (from “when pigs fly”)

36 Either of the “Grey Gardens” women : EDIE

“Grey Gardens” is a 1975 documentary about a reclusive mother and daughter, “Big Edie” and “Little Edie” Beale, living in a derelict mansion in a wealthy neighborhood of East Hampton, New York. Big Edie’s full name was Edith Ewing Bouvier Beale, and she was an aunt of former US First Lady Jacqueline Kennedy Onassis (née Bouvier). The two Edies lived for decades at the Grey Gardens estate, in increasing poverty. At one point, Jacqueline Kennedy, along with her sister, had to fund repairs of the mansion in order to avoid the house being torn down by the local authority.

Ike Barinholtz is an actor and comedian who appeared on MADtv from 2002 until 2007. More recently, Barinholtz became a writer on the TV show “The Mindy Project”, and was then cast as Nurse Morgan Tookers.

The US Department of State is the equivalent of the Foreign Ministry in many other countries, and is responsible for international relations. Ceremonially, the Secretary of State is the highest ranking of all Cabinet officials, and is the highest ranking in the presidential line of succession (fourth, after the Vice President, the Speaker of the House and the President pro tem of the Senate). The department was created in 1789 by President Washington, and was the first of all executive departments created. The first Secretary of State was future-president Thomas Jefferson.

56 Wall Street site, and what happened in order to form the answers to the starred clues? : STOCK EXCHANGE

New York’s famous Wall Street was originally named by the Dutch “de Waalstraat”. The “Waal” in question was a wall erected by Dutch colonists to protect them from an attack by the British from the north. The attack by land never came, but the British did mount a successful invasion by sea. The British demolished the wall two decades later, in 1699.

Rita Mae Brown is an American author who is best known for her 1973 novel “Rubyfruit Jungle”. Brown was the domestic partner of tennis champion Martina Navratilova in the late seventies and early eighties.

2 Game that introduced the joker into modern playing cards : EUCHRE

Playing cards, in various forms, have been around for centuries and were probably invented in China. The Joker card is an American invention, appearing first in the late 1860s. The Joker was introduced as a card for the game of Euchre, and the suggestion is that the term “Joker” comes from “Juker” or “Juckerspiel”, the original German name for Euchre.

GoPro is a company that makes high-definition video cameras that have a rugged design. Famously, GoPro cameras are used in extreme conditions. For example, they are often mounted on moving vehicles or used by people playing sports. Two astronauts on the International Space Station inserted a GoPro camera inside a floating ball of water, and then showed the view from inside the ball of water. Amazing footage …

10 Soccer great Lloyd who wrote the memoir “When Nobody Was Watching” : CARLI

Carli Lloyd is a retired professional soccer player who played on the US teams that won the FIFA World Cup in 2015 and 2019. In the 2015 tournament, she scored a hat-trick in the final. I well remember the only other hat trick in a World Cup final, a feat accomplished by Geoff Hurst for England in 1966.

Córdoba is a city in Andalusia in southern Spain that is sometimes referred to as “Cordova” in English. Córdoba might be the right destination for anyone seeking out a warm vacation spot in Spain. The city has the highest average summer temperatures in the whole of Europe.

Succulent plants are those with thickened stems and/or leaves that have evolved to retain water. As such, succulents are often found where the climate is particularly dry. The term “succulent” comes from the Latin “sucus” meaning “juice, sap”.

Kudzu is a climbing vine that is native to southern Japan and southeast China. “Kudzu” is derived from the Japanese name for the plant, “kuzu”. Kudzu is a vigorously growing weed that chokes other plants by climbing all over them and shielding them from light. Kudzu was brought to the US from Asia for the Japanese pavilion in the 1876 Centennial Exposition in Philadelphia. It was marketed as an ornamental, especially in the southeast of the country, and now is all over the region. Kudzu earned itself the nickname “the vine that ate the South”.

“Wolf Hall” is a 2009 historical novel by Hilary Mantel that provides a fictional account of the life of Thomas Cromwell, chief minister to King Henry VIII. The novel was adapted by the BBC into a very successful TV series of the same name. “Wolf Hall” is the first part of a trilogy of books by Mantel, followed by “Bring Up the Bodies” (2012) and “The Mirror and the Light” (2020).

“All I Want for Christmas Is You” is a 1994 song recorded by Mariah Carey that has become a holiday standard. The song was co-written by Carey with Walter Afanasieff, in just 15 minutes …