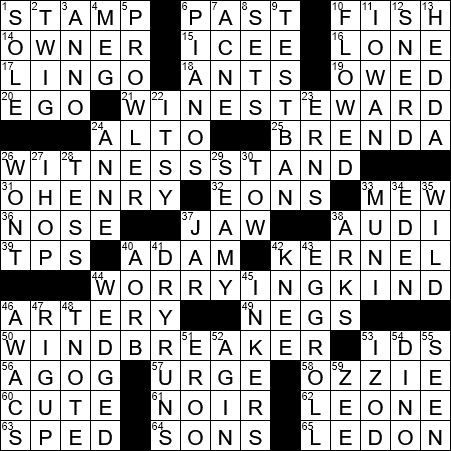 In the British Isles, the most common fish that is used in traditional “fish and chips” is Atlantic cod. Cod has been overfished all over the world, and is now considered to be an endangered species by many international bodies. Confrontations over fishing rights in the North Atlantic led to conflicts called “the Cod Wars” between Iceland and the UK in the 1950s and the 1970s, with fishing fleets being protected by naval vessels and even shots being fired.

Sigmund Freud created a structural model of the human psyche, breaking it into three parts: the id, the ego, and the superego. The id is that part of the psyche containing the basic instinctual drives. The ego seeks to please the id by causing realistic behavior that benefits the individual. The super-ego almost has a parental role, contradicting the id by introducing critical thinking and morals to behavioral choices.

“Sommelier” is the French word for “wine steward”. If that steward is a female, then the French term used is “sommelière”.

O’Henry’s short story called “The Gift of the Magi” was first published in 1905. It tells of relatively poor, newly-married couple who want to buy each other a gift for Christmas. The wife’s pride and joy is her long blonde hair, while the husband’s most treasured possession is his grandfather’s gold pocket watch. The wife sells her hair to buy her gift, and the husband sells his watch to buy his gift for his spouse. The wife is given a set of combs, hair accessories that are useless now that her hair is short. The husband gets a platinum fob chain for the watch that he no longer owns.

Adam Sandler’s big break was with “Saturday Night Live” (SNL). He then went on to make several successful movies and has his own movie and television production company. Personally, I am not a fan of Adam Sandler as a performer, nor of his movies …

“The Adventures of Ozzie and Harriet” originally ran from 1952 to 1966, and has been running continuously in syndication ever since. It still holds the record for the longest-running, non-animated sitcom ever seen on US television.

A dish prepared in the amandine style is usually cooked in butter and seasonings, and then sprinkled with toasted almonds. Note the correct spelling “amandine”. You might notice the misspelling “almondine” on a menu, but don’t say anything. Just sit there with a smug look on your face …

The ern (sometimes “erne”) is also called the white-tailed eagle or the sea eagle.

“Worst Cooks in America” is a reality show on the Food Network. it’s all about taking some really bad cooks and training them up in a few weeks to the level they can make a restaurant-quality meal.

The Sistine Chapel, in the Pope’s residence in Rome, takes its name from Pope Sixtus IV who was responsible for restoring the old Capella Magna in the 15th century. It was about a century later (1508-1512) that Michelangelo painted the ceiling of the Sistine Chapel under the patronage of Pope Julius II.

The traditional process for drawing a comic book involves a team of specialist artists. The penciller creates the initial drawing, the inker adds depth and shading to the drawing, the letterer adds text, and the colorist adds color.

When the British developed radar in WWII, they also came up with an airborne system that they actually deployed during the war. In 1944 the US Navy commissioned a similar system, and so launched the first American Airborne Early Warning (AEW) system, also before the war was over. The more modern term for the technology is “Airborne Warning and Control System”, or “AWACS” for short.

A Treasury note (T-note) is a government debt that matures in 1-10 years. A T-note has a coupon (interest) payment made every six months. The T-note is purchased at a discount to face value, and at the date of maturity can be redeemed at that face value. A T-bill is a similar financial vehicle, but it matures in one year or less, and a T-bond matures in 20-30 years.

The middle letter of the word “Arizona” is a letter Z (zee).