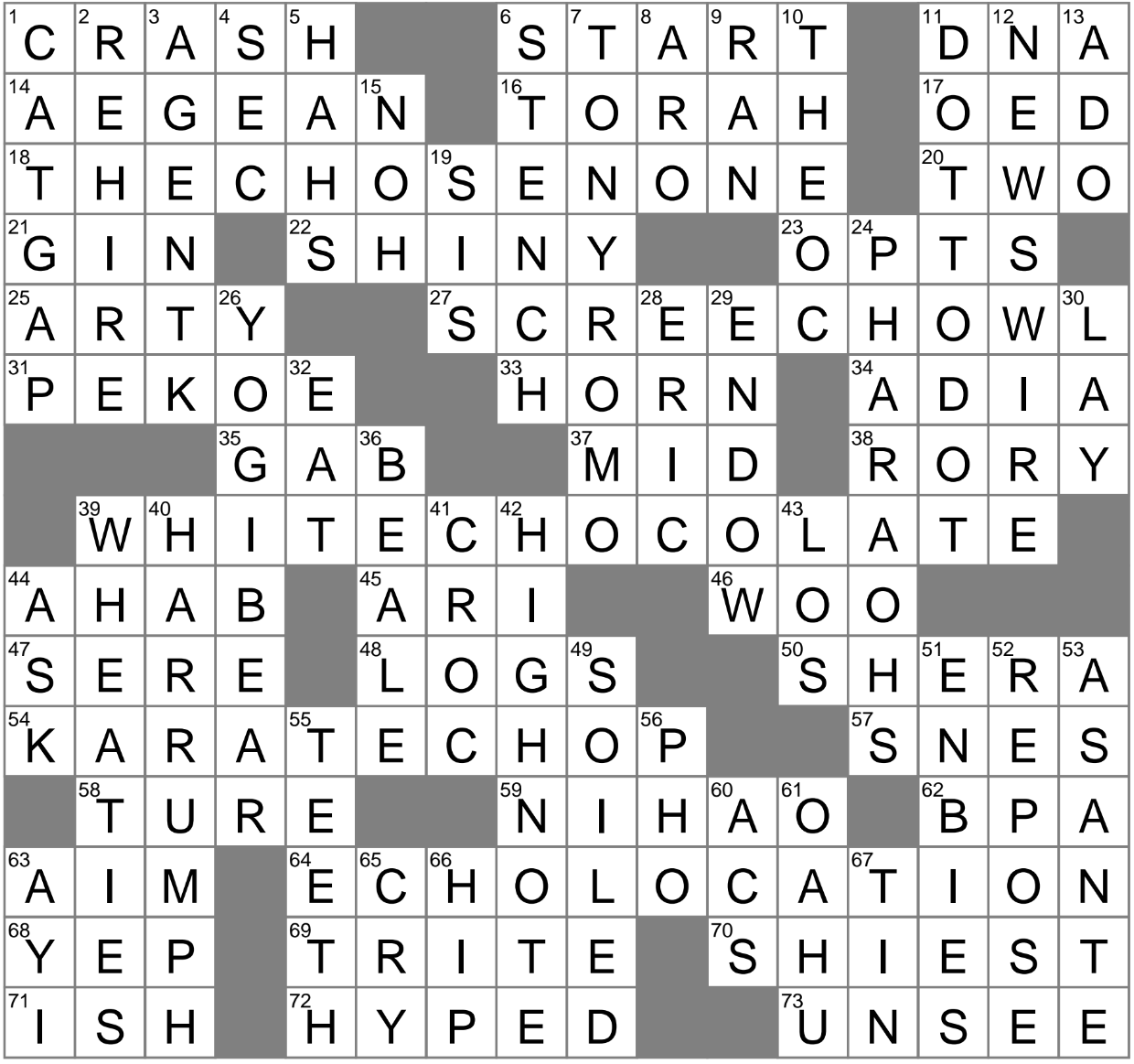 Themed answers each include the hidden word “ECHO” LOCATED within:

23andMe was the first company to offer direct-to-consumer genetic testing, doing so in 2007. Initially, 23andMe offered a test that determined a subject’s predisposition to a list of specific genetic traits, including baldness and blindness. The company now offers a cost-effective ancestry DNA test as well. The name “23andMe” is a reference to the 23 pairs of chromosomes in the cells of a human.

The Greek island of Santorini is the most southerly in the Cyclades group of islands in the Aegean Sea.

The “Oxford English Dictionary” (OED) contains over 600,000 “main” entries and 59 million words in total. The longest entry for one word in the second edition of the OED is the verb “set”. When the third edition was published in 2007, the longest entry for a single word became the verb “put”. Perhaps not surprisingly, the most-quoted author in the OED is William Shakespeare, with his most quoted work being “Hamlet”. The most-quoted female author is George Eliot (aka Mary Ann Evans).

Adia Barnes is a former WNBA player who was appointed head coach of the University of Arizona Wildcats women’s basketball team in 2016. Earlier in her career, Barnes played internationally for Dynamo Kiev in Ukraine, and also turned out for several Euroleague teams. She is married to a basketball coach she met in Italy.

Stokely Carmichael was a civil rights leader who was prominent in the Black Power movement, the Black Panther Party and All-African People’s Revolutionary Party. He became a target of the FBI under the leadership of J.Edgar Hoover, which resulted in Carmichael leaving the US and settling in Africa, first in Ghana and then in Guinea. There he became an influential figure in the Pan-African movement, and adopted the name “Kwame Ture”.

One might say “ni hao” in Chinese to mean “hello”, although a more literal translation is “you good”.

62 Chemical in some plastics, briefly : BPA

Bisphenol A (BPA) is an organic chemical that is used extensively in the manufacture of plastics. The main source of the controversy surrounding the use of the chemical is that BPA has hormone-like properties and has been classified as an endocrine disruptor, meaning that it can interfere with human hormone systems. BPA is “everywhere”, given the amount of plastic that we use in society. The debate seems to be whether or not the levels that we are exposed to are sufficient to create a health risk.

64 Nature’s sonar, and what varies in the answers to the starred clues? : ECHOLOCATION

The Swiss psychiatrist Carl Jung popularized the terms “Introvert” and “extrovert”, although he believed that we all have introverted and extroverted sides to us. Nowadays we tend to think of extroversion and introversion as extremes on a continuum. We bloggers, sitting at home glued to our laptops, tend to the introverted end of the scale …

1 Period with a noticeable lack of feline fossils : CAT GAP

Based on fossil records, there was a period in North America from about 25 to 18.5 million years ago when very, very few cat species existed. The cause of this “cat gap” in the fossil record is a subject of debate.

The US Securities and Exchange Commission (SEC) was established by the Securities Exchange Act of 1934, and has primary responsibility for enforcing federal securities law. The first chairman of the SEC was Joe Kennedy, father of future president John F. Kennedy.

7 Four-time Pro Bowl quarterback who never made it to the Super Bowl : TONY ROMO

Someone described as aromantic (“aro”, for short) experiences little or no romantic attraction. The opposite of aromanticism is a alloromanticism.

“The O.C.” is a teen drama that aired for four seasons on Fox finishing up in 2007. I never watched it, but I understand that it is set in Newport Beach in Southern California. And, “O.C.” stands for “Orange County”.

A news agency (also “newswire, wire service”) is an agency that collects news reports and sells them on to other news organizations. The big three news agencies are Agence France-Presse (AFP), the Associated Press (AP), and Reuters.

Nemes were headdresses worn by the pharaohs of ancient Egypt. They consisted of a striped cloth that covered the crown of the head and the nape of the neck, with two large flaps that hung down behind the ears.

“If Beale Street Could Talk” is a 2018 film based on a 1974 novel of the same name by Barry Jenkins. Both novel and movie tell the story of a young woman working to clear the name of her lover, who was wrongfully charged with rape.

Wheaties were introduced to the world in 1924, making it the oldest cereal produced by General Mills. The idea of mixing wheat and bran together into a cereal was the result of an accidental spill of wheat bran into a stove. The product was first called Washburn’s Gold Medal Whole Wheat Flakes, and this was changed to Wheaties after an employee contest to find a better name.

Crocs are foam clogs that were originally designed as shoes to be worn at health spas. I recently bought my first pair of crocs, and now my kids won’t talk to me …

The non-binary (NB, enbie, enby) spectrum of gender identities covers those that do not qualify as exclusively masculine or feminine.

Ayi Kwei Armah is an author from Ghana who is perhaps most famous as a novelist. His debut novel is “The Beautyful Ones Are Not Yet Born” (1968), which centers on the exploits of a man living in post-independence Ghana in the mid-1960s.

Sardines are oily fish related to herrings. They are also known as pilchards, although in the UK “sardine” is a noun reserved for a young pilchard. Very confusing …