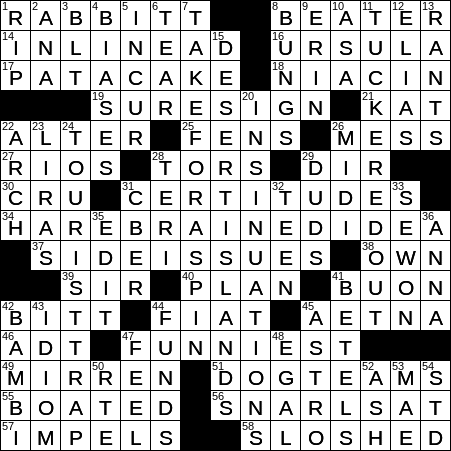 “Beater” is slang describing an old car that is in poor condition, and is a term that dates back only to the 1980s.

Actress Ursula Andress was quite the sex symbol in the sixties, and famously played Honey Ryder in the first James Bond movie “Dr. No”. Andress was born in Switzerland and is fluent in English, French, Italian, German as well as her native Swiss-German.

“Pattycake” or “Pat-a-Cake” is an old English nursery rhyme that is often accompanied by hand-clapping between two people:

Niacin is also known as vitamin B3. A deficiency of niacin causes the disease pellagra. Pellagra is often described by “the four Ds”, the symptoms being diarrhea, dermatitis, dementia and death.

If you ever take a cruise ship to Jamaica, you will likely disembark in Ocho Rios, a major port of call for the cruise lines. “Ocho rios” is Spanish for “eight rivers”.

“Cru” is a term used in the French wine industry that means “growth place”. So, “cru” is the name of the location where the grapes are grown, as opposed to the name of a specific vineyard. The terms “premier cru” and “grand cru” are also used, but the usage depends on the specific wine region. Generally it is a classification awarded to specific vineyards denoting their potential for producing great wines. “Grand cru” is reserved for the very best vineyards, with “premier cru” the level just below.

“Buon Giorno” is the Italian for “Good morning”, although the term translates literally as “Good day”.

A bitt is a post mounted on the bow of a boat that is used for fastening lines and cables. It is designed to be strong enough to hold a towline if necessary.

Fiat is the largest car manufacturer in Italy, and is headquartered in Turin in the Piedmont region in the north of the country. Fiat was founded in 1899 by Giovanni Agnelli, when the company’s name was “Fabbrica Italiana di Automobili Torino” (FIAT). A few years ago, Fiat became the majority shareholder in Chrysler.

The 2006 movie “The Queen” is a great film, and what a superb performance from Helen Mirren in the title role of Queen Elizabeth II. It must have been a difficult film for Queen Elizabeth to watch, as it rehashes the PR disaster that surrounded her following the death of Princess Diana. But, she was gracious enough to invite Helen Mirren around to the Palace for dinner after the film was released. Mirren declined however, citing filming commitments in the US. Mirren was invested as a Dame Commander of the Order of the British Empire back in 2003, an honor presented to her by Prince Charles.

In the movie “Singin’ in the Rain”, the wonderful dance sequence to the title song was filmed over 2-3 days. Gene Kelly was splashing through puddles and getting rained on while all the time he was sick, with a fever of 103°F.

Ripping is the process of copying audio or video files onto a hard disk. Ripping isn’t the same as direct copying, as the former involves changing the format of the audio or video content.

The Elias Sports Bureau has been providing research and statistics for professional sports since 1913. The business was set up in 1913 in New York City by Al Munro Elias and his brother Walter.

A diatribe is a bitter discourse. The term comes from the Greek “diatribein” meaning “to wear away”.

“Lois & Clark: The New Adventures of Superman” is a television show that aired originally from 1993 to 1997. The storyline focuses as much on the relationship between Clark Kent and Lois Lane as it does on Kent’s life as Superman. Clark and Lois are played by Dean Cain and Teri Hatcher.

A CB’er is someone who operates a Citizens Band (CB) radio. In 1945, the FCC set aside certain radio frequencies for the personal use of citizens. The use of the Citizens Band increased throughout the seventies as advances in electronics brought down the size of transceivers and their cost. There aren’t many CB radios sold these days though, as they have largely been replaced by cell phones.

A betel nut is a type of nut that is chewed, especially in parts of Asia. “Betel nut” is a bit of a misnomer, as the nut in question is actually an areca nut from the Areca palm. For chewing, the areca nut is wrapped in betel leaves and the whole thing is called a “betel nut”.

42 Tale of a whitetail : BAMBI

The 1942 Disney classic “Bambi” is based on a book written by Felix Salten called “Bambi, A Life in the Woods”. There is a documented phenomenon known as the Bambi Effect, whereby people become more interested in animal rights after having watched the scene where Bambi’s mother is shot by hunters.

The white-tailed deer (sometimes just “whitetail”) is very common in North America, especially east of the Rocky Mountains. West of the Rockies, whitetails have largely been replaced by black-tailed deer.