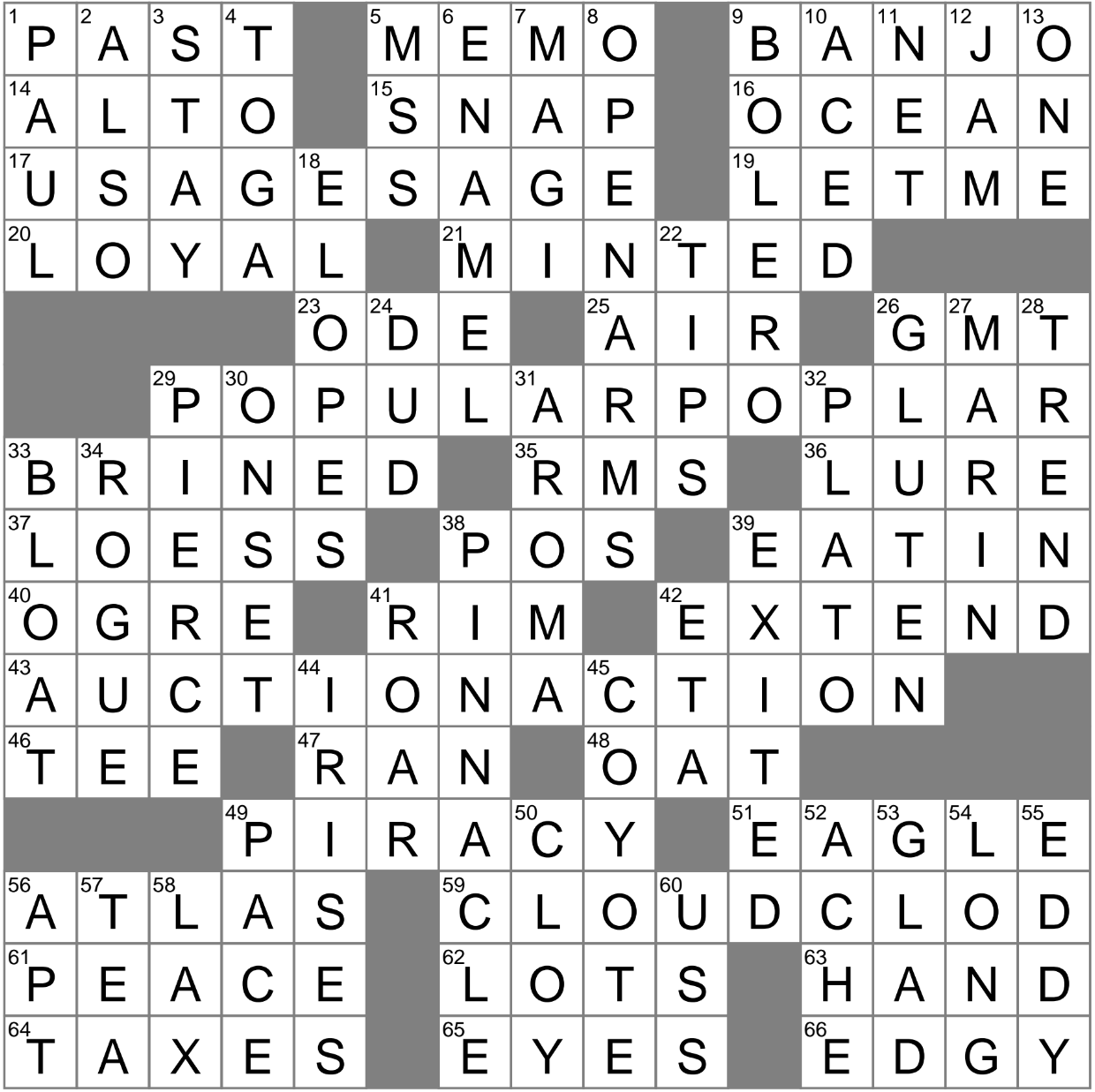 Today’s Theme (according to Bill): Missing You

Themed answers are two-word phrases in which the second word is the same as the first, but with a letter U missing:

Béla Fleck is a banjo player who performed with the bands New Grass Revival and Béla Fleck and the Flecktones. He was born in New York City and was given the name Béla Anton Leoš Fleck. He was named after Hungarian composer Béla Bartók, Austrian composer Anton Webern, and Czech composer Leoš Janáček. That’s quite a name to live up to, but by all accounts Fleck is one of the most technically proficient banjo players the world has ever known.

Ocean Vuong is a Vietnamese-American poet and novelist. He was born in Ho Chi Minh City in 1988, under the name Vương Quốc Vinh. His mother gave him the English given name “Beach”, but changed it to “Ocean” after someone pointed out that “Beach” sounded like “Bitch” when pronounced with a Vietnamese accent. Vuong’s 2016 collection of poetry “Night Sky with Exit Wounds” won the T. S. Eliot Prize in 2017. His debut novel “On Earth We’re Briefly Gorgeous” was published in 2019.

29 Aspen, in the Rockies? : POPULAR POPLAR

Loess is a wind-blown accumulation of silt. The word “loess” is German in origin and was first used to describe silt along the Rhine Valley.

Something described as “capacious” is spacious, capable of holding much.

We always seem to remember the phrase “The Eagle has landed”, historic words spoken by Neil Armstrong when he put down Apollo 11’s Lunar Excursion Module (LEM) on the surface of the moon. Looking back I have to say that the words preceding “The Eagle has landed” seem to have even more impact. During the descent to the moon’s surface Armstrong used the call sign “Eagle”, indicating that he was communicating from the LEM. After he killed the engines on touching down, Armstrong’s first words home to Earth were “Houston, Tranquility Base here. The Eagle has landed.” That switch of call sign from “Eagle” to “Tranquility Base” always sends shivers down my spine …

The Peace Corps is an organization of American volunteers that is run by the US government. The Peace Corps was established by President Kennedy in 1961, and has a three-part mission:

I think Paul Rudd is a very talented actor. He has played a variety of roles in movies but is probably best known on television for playing Phoebe Buffay’s boyfriend, and then husband, on the sitcom “Friends”.

An editor (ed.) might read or edit a manuscript (ms).

An editor (ed.) might read or edit a manuscript (ms).

A bolero jacket is a very short tailored jacket that probably takes its name from the Spanish dance. Male bolero dancers often wear such a jacket. A less formal version of a bolero jacket is called a “shrug”. A shrug is usually knitted and resembles a cardigan.

Gluten is a protein mixture found in foods processed mainly from wheat. The sticky properties of gluten are used in making bread, giving dough its elasticity and making the final product chewy. “Gluten” is the Latin word for “glue”.

The Spanish suffix “-ista” indicates a supporter or follower. Examples would be “fashionista” (a follower of fashion) and “Sandinista” (member of a Nicaraguan political party named for revolutionary Augusto César Sandino).

“Rogue One: A Star Wars Story” is a 2016 movie that serves as a prequel to the original 1977 film “Star Wars: Episode IV – A New Hope”. “Rogue One” is the improvised military call sign used by rebel soldiers who go on a mission to steal plans for the Death Star.

The coyote is a canine found in most of Central and North America. The name “coyote” is Mexican Spanish, in which language it means “trickster”. In Native-American folklore, the coyote is an important character, one often playing tricks and defying conventional behavior. Coyotes can sometimes mate with domestic dogs, creating hybrid animals known as “coydogs”. Coyotes can also mate with wolves, creating a “coywolf”. South Dakota named the coyote its state animal in 1949.