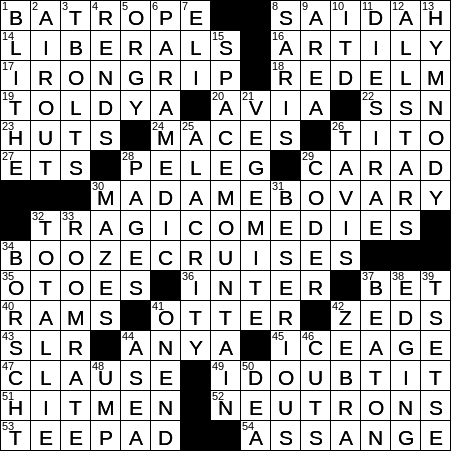 The Pequod is the ship that figures in Herman Melville’s classic novel “Moby-Dick”. The ship is owned by a consortium of the citizens of Nantucket Island, including Captains Ahab, Bildad and Peleg.

Madame Bovary” is 2014 film adaptation of the 1856 novel of the same name by Gustave Flaubert. The title character is played by Australian actress Mia Wasikowska.

“Madame Bovary” is the most famous novel written by Gustave Flaubert. The title character is a doctor’s wife named Emma Bovary, who lives a luxurious life beyond her means and has many adulterous affairs. The novel had a rousing reception, first being attacked by public prosecutors as obscenity, which I am sure later helped it to become a bestseller.

The Winnebago people of Nebraska takes their name from the Fox River that flows below what is now called Lake Winnebago in eastern Wisconsin. The muddy water of the river led to the people nearby being named “winepyekoha” in the Potawatomi language, which translates as “person of the dirty water”.

Chrysler put ram hood ornaments on all of its Dodge branded vehicles starting in 1933. When the first line of Dodge trucks and vans were introduced in 1981, they were named “Rams” in honor of that hood ornament.

There is a pair of letters Z (zee) in the word “puzzles”.

Minolta was a Japanese manufacturer of cameras and related products. Minolta was founded in 1928 to make cameras using imported German technology. One of the company’s most memorable products was the world’s first integrated autofocus 35mm SLR camera. Minolta merged with Konica in 2003, forming Konica Minolta.

The neutron is a subatomic particle with no charge that was discovered by British physicist James Chadwick in 1932.

Disc golf is also known as Frisbee golf, and sometimes even Frolf. Believe it or not, disc golf predates the introduction of the Frisbee. The first game was played at a school in Bladworth, Saskatchewan in 1926. The participating schoolkids threw tin lids into circles drawn on a course they created in the school grounds. They named the game “Tin Lid Golf”.

“Dies Irae” is Latin for “Day of Wrath”. It is the name of a famous melody in Gregorian chant, one that is often used as part of the Roman Catholic Requiem Mass.

The singing and composition of hymns is known as hymnody. The “hymnody” is also used for a collection of hymns.

Space Mountain is a roller coaster that’s a little unusual in that it is located indoors. Riders get to experience the thrills in the dark.

Vegemite is a spread made from spiced-up brewers’ yeast extract. I’m told that it resembles Marmite, a spread that I used to eat as a kid back in Ireland. I’m also told that Vegemite has a flavor similar to beef bouillon.

“Weeds” is a Showtime television series that originally aired from 2005 to 2012. “Weeds” is a comedy-drama about a mother of two who has to turn to growing and selling marijuana to support her family after her husband dies.