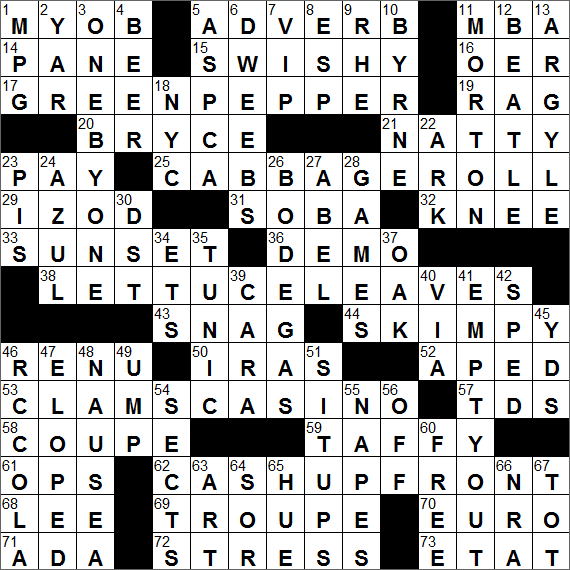 Today’s themed answers each start with a slang term for “money”, each has CASH UP FRONT:

1…”Stay out of my affairs,” briefly..MYOB

Bryce Harper is a MLB right-fielder who was chosen by the Washington Nationals as the first overall pick in the 2010 Draft.

Soba is a thin Japanese noodle made from buckwheat flour. In Japan, the word “soba” tends to be used to describe any thin noodle, in contrast with the thicker noodles that are called udon.

The dish known as clams casino comprises clams served on the halfshell with breadcrumbs and bacon, broiled to a golden brown. The recipe originated in Rhode Island, apparently developed by the staff in a hotel in Narragansett, Rhode Island. The dish was named for the hotel, the Little Casino.

Salt water taffy was invented in Atlantic City and is now found all over the US, but primarily in coastal towns (for some reason) and not really outside of America. Taffy is made by stretching the solid mass made by boiling up sugar, butter, flavoring, and coloring until it achieves a fluffy texture. Despite the inference in the name, the recipe for salt water taffy does not include “seawater”, but does include both salt and water.

The French franc was made up of 100 centimes, before being replaced by the Euro.

The French word for “state” is “état”.

Unlike in most developed countries, there is no “umbrella” organization in the US with the goal of preventing cruelty to animals. Instead there are independent organizations set up all over the nation using the name SPCA. Having said that, there is an organization called the American Society for the Prevention of Cruelty to Animals (ASPCA) that was originally intended to operate across the country, but really it now focuses its efforts in New York City.

Dweeb is relatively recent American slang that came out of college life in the late sixties. Dweeb, squarepants, nerd, they’re all not-nice terms that mean the same thing: someone excessively studious and socially inept.

Irish actor Gabriel Byrne is probably probably still best known for his starring role in the 1995 film “The Usual Suspects”, although he has an impressive resume of roles since the mid-nineties. One of his more noted television roles was playing therapist Dr. Paul Weston on the HBO series “In Treatment” from 2008 to 2010. Byrne was married to actress Ellen Barkin from 1988 until they divorced in 1999.

11…Salt brand with an umbrella girl..MORTON

Morton Salt started doing business in 1848 in Chicago, and now is the largest producer of salt in North America. The product’s logo is the Morton Salt Girl, a young girl walking with an open umbrella in the rain, scattering salt behind her from a cylinder.

18…Metropolis served by JFK and LGA..NYC

The ratio of a circle’s circumference to its diameter is a mathematical constant, which we denote with the Greek letter pi (π). Approximate values for the pi that are often used in calculations are 22/7 and 3.1415926. If you count the letters in each word of the mnemonic “How I wish I could calculate pi easily”, the sequence gives you the first eight digits of the value of pi, i.e. 3.1415926.

“Bodega” is the Spanish term for a winery, or these days for a grocery store.

The Roman forum was the public space in the middle of a city, taking it’s name from the Latin word “forum” meaning “marketplace, town square”. “The Roman Forum” is most famous example of such a space. The Forum is at the heart of the city of Rome, is surrounded by the ruins of several ancient government buildings, and has been referred to as the most celebrated meeting play in the world.

In Italian, “cara” (dear) is a word spoken “con affetto” (with affection).

“Nausea” is a sick feeling in the stomach. The term derives from the Greek “naus” meaning “ship”, and so was originally associated only with seasickness.

1…”Stay out of my affairs,” briefly..MYOB

15…Like the sound of tall grass in the breeze..SWISHY

11…Salt brand with an umbrella girl..MORTON

18…Metropolis served by JFK and LGA..NYC

41…Remove everything from, as a fridge..EMPTY OUT

47…Snuck out to get hitched..ELOPED