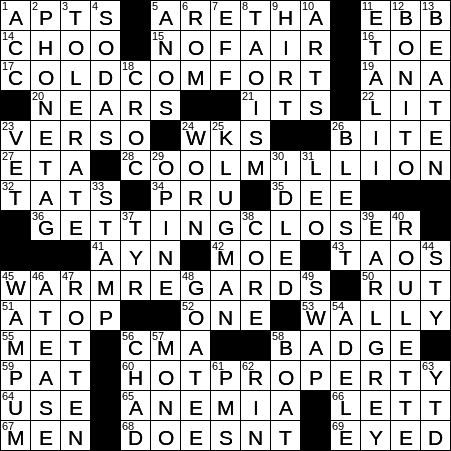 Themed answers start with hints given when GETTING CLOSER in a parlor game:

I think that Aretha Franklin, the “Queen of Soul”, had a tough life. Franklin had her first son when she was just 13-years-old, and her second at 15. In 2008, “Rolling Stone” magazine ranked Franklin as number one on its list of the greatest singers of all time.

We used to see a lot of American television programming growing up in Ireland, but “Leave It to Beaver” was one show that didn’t make it across the Atlantic. I’ve seen a couple of episodes, and I am not sure it would travel well. The show went on the air for the first time the day that Sputnik was launched by the Russians, and aired its last show just a few months before President Kennedy was assassinated. An iconic series, by all accounts.

The city of Bucharest has been the capital of Romania since 1862. A native of the city is known as a “Bucharester”.

Al Hirt was a trumpeter and bandleader. Hirt’s most famous recordings were the song “Java” and the album “Honey in the Horn”, as well the theme song used “The Green Hornet” TV series in the sixties.

Jack Klugman was an actor who perhaps was most famous for his television roles. He played Oscar Madison in the “The Odd Couple” alongside Tony Randall, and he also played the title role in “Quincy, M.E.” On the big screen, Klugman did a marvelous job as one of the jurors in the 1957 classic “12 Angry Men”.

“Quincy, M.E.” is a medical mystery series that originally aired in the seventies and eighties starring Jack Klugman in the title role. The show was loosely based on a book by former FBI agent Marshall Houts called “Where Death Delights”.

On the sitcom “Seinfeld”, Jerry’s eccentric maternal uncle is Leo, played by actor Len Lesser. Lesser acted in movies and television for many years, alongside some of the greats of stage and screen. He was fond of telling a marvelous story about acting in the 1973 film “Papillon” starring Steve McQueen and Dustin Hoffman. In his role as a prison guard, Lesser was required to shove McQueen, but McQueen didn’t think that Lesser was pushing him roughly enough. He turned to Lesser and told him “Don’t think of me as a movie star. Think of me as a character in a show”, encouraging him to be more aggressive. When McQueen walked away, Hoffman was left standing there beside Lesser. He paused and quietly said to Lesser, “Think of me as a movie star …”

The term “roulette” means “little wheel” in French, and the game as we know it today did in fact originate in Paris, in 1796. A roulette wheel bears the numbers 1-36. A French entrepreneur called François Blanc introduced the number “0” on the wheel, to give the house an extra advantage. Legend has it that Blanc made a deal with the devil in order to unearth the secrets of roulette. The legend is supported by the fact that the numbers 1 through 36 add up to a total of “666”, which is the “Number of the Beast”. Spooky …

45 Beads once used by Native Americans as currency : WAMPUM

Wampum are sacred shell beads of North American tribes in the Eastern United States. The early European colonists often used wampum to trade with the native peoples. From this original usage, “wampum” came to be a slang term for money.

The landlocked African country called Chad takes its name from the second largest wetland on the continent, which is known as Lake Chad.’