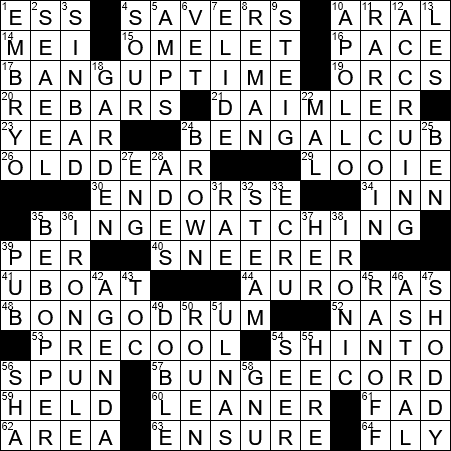 Themed answers start with the letter sequence BxNG, where x represents a vowel progression as move from the top of the grid to the bottom:

A steel bar or mesh that is used to reinforce concrete is called “rebar”, which is short for “reinforcing bar”.

German engineers Gottlieb Daimler and Karl Benz worked independently of each other, although just sixty miles apart, to develop the first gasoline-powered vehicle. Most historians credit Benz the win in that race in 1885/86, as he came up with a three-wheel vehicle that used a four-stroke gasoline engine for power. Daimler showed off his four-wheel vehicle in 1886, that was also powered by a four-stroke gasoline engine. Daimler died in 1900, and the company bearing his name merged with Benz’s company in 1926 to form Daimler-Benz. Benz passed away three years later, in 1929.

I’m a big fan of binge-watching, the practice of watching perhaps two or three (even four!) episodes of a show in a row. My wife and I will often deliberately avoid watching a recommended show live, and instead wait until whole series have been released on DVD or online. I’m not a big fan of “tune in next week …”

U-boat stands for the German “Unterseeboot” (undersea boat). U-boats were primarily used in WWII to enforce a blockade against enemy commercial shipping, with a main objective being to cut off the supplies being transported to Britain from the British colonies and the US. The epic fight for control of the supply routes became known as the Battle of the Atlantic.

Karl Dönitz was the commander of a submarine during WWI, but was captured by the British after his vessel was sunk. It was while in a prisoner of war camp that Dönitz developed the strategy of using coordinated groups of submarines to attack convoys, a strategy that he famously introduced in the Battle of the Atlantic during WWII. He called this strategy “Rudeltaktik”, which translates as “tactics of a pack”. The strategy came to be known as “wolfpack” in English. The US Navy adopted the wolfpack strategy later in WWII, against Japanese convoys in the Pacific.

Bongo drums are Cuban percussion instruments consisting of a pair of drums, one larger than the other, The smaller drum is called the “hembra” (female) and the larger the “macho” (male).

The genre of music called salsa is a modern interpretation of various Cuban traditional music styles.

The wonderful 2001 movie “A Beautiful Mind” was adapted from a very successful book of the same name written by Sylvia Nasar. Both book and film tell the life story of John Nash (played by Russell Crowe on the big screen). Nash was a mathematician and Nobel Laureate who struggled with paranoid schizophrenia. Sadly, Nash and his wife died in a car crash on the New Jersey Turnpike in 2015. They were on their way home from the airport, returning from Norway where Nash had been awarded the Abel Prize.

53. Remove field heat from before storage, as crops : PRECOOL

Crops harvested from a field are basically still alive, with metabolic processes continuing. Those metabolic processes are referred to as “field heat”. Crops are routinely “precooled” to slow down cellular metabolism, thus increasing shelf life and slowing the ripening of fruit.

It is perhaps best not to describe Shinto as a religion, but more as a “spirituality of the Japanese people”, a spirituality that encompasses folklore, history and mythology. Having said that, “Shinto” translates literally as “Way of the Gods”. Most people in Japan who are described as practicing Shinto, also practice Buddhism.

What we call “cotton candy” here in the US has some interesting names in the rest of the world. Back in Ireland it’s candyfloss, in France it “barbe à papa” (Dad’s beard), and in Australia it is called fairy floss. “Fairy floss” is actually the original name for cotton candy, a name first used when the confection was introduced at the St. Louis World’s Fair in 1904.

The elastic cord known as bungee cord is also known as shock cord. The term “bungee” probably comes from Britain where it was schoolboy slang for “rubber eraser”, and likely came from the words “bouncy” and “spongy”.

In the game of horseshoes, a ringer is scored when the tossed shoe lands around the target stake. A leaner is almost as good as a ringer, and is scored when a horseshoe lands upright or leans against the stake.

“Sinbad” is the stage name of standup comedian and actor David Adkins. Adkins chose the stage name early in his career, simply in an attempt to stand out from the crowd. Sinbad has certainly achieved success, but has had trouble managing his finances. He owed a lot of money to the state of California for taxes, and had to declare bankruptcy in 2010.

The Apollo Theater in the Harlem district of Manhattan, New York was opened in 1914 as Hurtig and Seamon’s New Burlesque Theater. The original facility was a whites-only venue. When it was opened to African Americans in 1934, the name was changed to the Apollo.

Corinne Bailey Rae is a British singer from Yorkshire in the north of England.

Totalitarianism differs somewhat from author regimes differ somewhat from authoritarian regimes, at least by definition. In the latter, the ruling entity is concerned mainly with political power, and so a degree of freedom exists for the populace. Totalitarian regimes not only enforce political control, but also control of the economy, education, as well social and private life.

42. It may form the outline for a meeting’s minutes : AGENDA

“Skedaddle ” is a slang term meaning “run away” that dates back to the Civil War.

The lively and dramatic dance called the paso doble (Spanish for “double-step”) is very much associated with the Spanish bullfight, but in fact it originated in southern France, where bullfighting is also legal. The dance is based on music that is played at bullfights when the bullfighters enter the arena, and when they close in for the kill. Not a big fan of bullfighting …