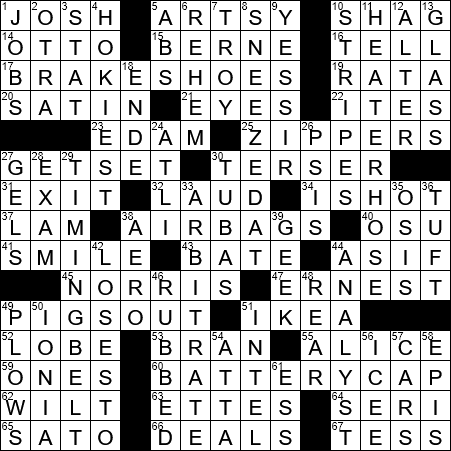 Themed answers are parts of CARS, although are clued as if not:

When the verb “to josh”, meaning “to kid”, was coined in the 1840s as an American slang term, it was written with a capital J. It is likely that the term somehow comes from the proper name “Joshua”, but no one seems to remember why.

Germany first became a country of her own in 1871 when the Princes of the various independent German states met at Versailles outside Paris to proclaim Wilhelm of Prussia as the Emperor of the German Empire. The man behind this historic development was Wilhelm’s Ministerpräsident, Otto von Bismarck. Von Bismarck was a powerful figure in Prussia and indeed on the world stage, earning him the nickname of the “Iron Chancellor”.

17. *Footwear that slows you down? : BRAKE SHOES

To take a gander is to take a long look. “Gander” is a term we’ve been using in this sense since the 1880s, coming from the idea that in taking a long look one might be craning one’s neck like a goose (or gander).

A satchel is a soft-sided bag, one usually with a strap that is often worn diagonally across the body. When we were kids in Ireland, we’d carry our books to and from school in a backpack satchel. Virtually every Irish schoolchild had a satchel back then.

“Walker, Texas Ranger” is an action TV show starring Chuck Norris in the title role. The TV show was inspired by the 1983 action movie “Lone Wolf McQuade” in which Norris also played a Texas Ranger.

47. Name on the cover of “Death in the Afternoon” : ERNEST

“Death in the Afternoon” is a 1932 non-fiction book by Ernest Hemingway about bullfighting. He was a fan …

Every IKEA store features a restaurant that serves traditional Swedish food, including Swedish meatballs and lingonberry jam. Each store also has a Swedish Food Market where customers can purchase specialty foods from Sweden.

Here are some lines from Lewis Carroll’s “Alice’s Adventures in Wonderland”:

Se-Ri Pak is a South Korean golfer playing on the LPGA tour. Having a Korean name, we really should be calling her Pak Se-Ri as she is known in her homeland. Korean names always start with the family name.

Prime Minister Eisaku Sato of Japan won the Nobel Peace Prize in 1974 (sharing it with Irishman Sean MacBride). He won for “his renunciation of the nuclear option for Japan and his efforts to further regional reconciliation”. Sato defined Japan’s nuclear policy in the sixties by laying out “Three Non-Nuclear Principles”. The principles are that Japan will not possess, nor manufacture nuclear weapons, not permit introduction of nuclear weapons into Japanese territory.

Oviedo is a cathedral city in northern Spain located just over ten miles from the Bay of Biscay coast.

Atli is a character in the Volsunga Saga of 13th century Icelandic lore. It is believed that the Atli character is loosely based on Attila the Hun. According to myth, Atli was murdered by his wife Gudrun.

The suffix “-osis” is found in medical terms. The suffix indicates a disorder in general, with the prefix providing more specificity. Examples are silicosis (a lung disease caused by the inhalation of silica dust), and psychosis (a serious mental illness). The plural of “-osis” is usually “oses”, but “osises” is out there as well.

Originally, a geek was a sideshow performer, perhaps one at a circus. We use the term today for someone regarded as foolish or clumsy, or for someone who is technically driven and expert, but often socially inept.

Lydia and Ionia were ancient territories in a part of the world now covered by modern-day Turkey. Both territories eventually fell under Greek and then Roman rule.