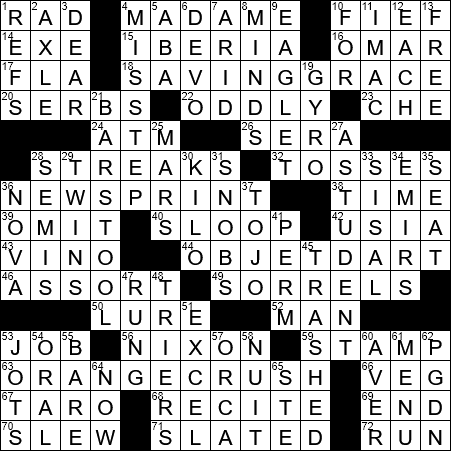 Themed answers each END with a synonym of “RUN”:

4 Title for Bovary or Defarge : MADAME

“Madame Bovary” is the most famous novel written by Gustave Flaubert. The title character is a doctor’s wife named Emma Bovary, who lives a luxurious life beyond her means and has many adulterous affairs. The novel had a rousing reception, including an attack by public prosecutors who labeled is as obscene, which I am sure later helped “Madame Bovary” to become a bestseller.

Madame Thérèse Defarge is a character in the Charles Dickens novel “A Tale of Two Cities”. As part of her role in the story, Mme. Defarge sits knitting while observing the guillotine doing its macabre work.

Montenegro is a country in Southeastern Europe that once was part of Yugoslavia. “Montenegro” is a historical Italianate translation of “black mountain”.

38 Person of the Year awarder : TIME

The Beach Boys hit “Sloop John B” is a traditional folk song from the West Indies that was originally titled “The John B. Sails”. The John B. was a real boat, one used for collecting sponges. The John B. foundered and sank in Governor’s Harbor on the Bahamas on or about 1900. The folk song was around as far back is 1927, with recordings being made as early as 1935. The Kingston Trio recorded a version in 1958, as did Johnny Cash in 1959. The Beach Boys version of the song made it to #3 in the US charts in 1966. We liked it even more in Ireland and sent it to the top of the Irish charts.

The United States Information Agency (USIA) was established under President Eisenhower in 1953, and continued operating until 1999. It’s mission was “public diplomacy”, another term for propaganda broadcast over radio airwaves. The intent from day one was to avoid having the broadcasts identified as propaganda. Speaking as a former listener to the USIA’s Voice of America (VOA) over in Europe, there were a lot of fun programs that had one coming back to hear more, but we all knew it was propaganda quite frankly …

71 On the schedule : SLATED

There have been several rovers sent to Mars from Earth. The Soviet Union’s Mars 2 landed in 1971, and failed. Mars 3 landed the same year, and ceased operation just 20 seconds after landing. NASA’s Sojourner landed in 1997 (what a great day that was!) and operated from July through September. The British rover Beagle 2 was lost six days before its scheduled entry into the Martian atmosphere. NASA’s Spirit landed in 2004, and operated successfully for over six years before getting trapped in sand and eventually ceasing to communicate. NASA’s Opportunity also landed in 2004, and it is still going. And then NASA’s Curiosity made a spectacular, hi-tech landing in 2012 and is continuing to explore the planet today.

The Canadian province of Nova Scotia (NS) lies on the east coast of the country and is a peninsula surrounded by the Atlantic Ocean. The area was settled by Scots starting in 1621, and Nova Scotia is Latin for “New Scotland”.

Hideki Tojo was a general and the Prime Minister of Japan during most of WWII. Although the attack on Pearl Harbor was planned before he took office, Tojo was the Prime Minister who made the decision to declare war on the US. After Japan surrendered, General MacArthur ordered Tojo’s arrest. Tojo attempted to commit suicide by shooting himself in the heart, but missed. There is a story that while recovering, Tojo was given a set of replacement dentures that were made by an American dentist. Apparently the dentist drilled the message “Remember Pearl Harbor” into the teeth in Morse code. Tojo was hanged for war crimes in 1948.

Penguins are flightless, aquatic birds that spend half their lives on land, and half in the sea. All species of penguins, bar one, live in the southern hemisphere. The one species found north of the equator is the Galápagos penguin that is endemic to the Galápagos Islands located west of Ecuador. Adult male penguins are called cocks, females are hens, and the young are chicks. A group of penguins in the water is a raft, and on land is a waddle. Apt, and cute …

Nantes is a beautiful city located on the delta of the Loire, Erdre and Sèvre rivers. It has the well deserved nickname of “The Venice of the West”. I had the privilege of visiting Nantes a couple of times on business, and I can attest that it really is a charming city …