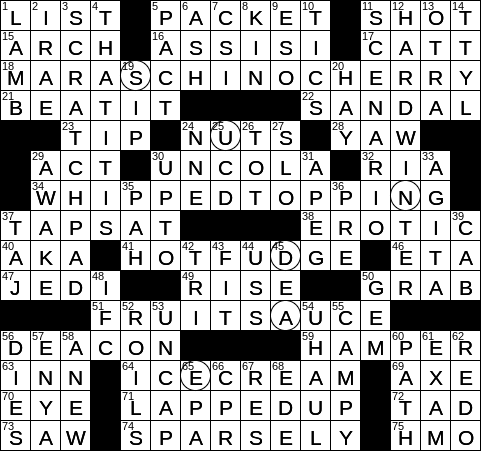 Themed answers are ingredients layered into a SUNDAE, and in order from top to bottom. One letter from each layer is circled in the grid, and those circled letters spell out the word “SUNDAE”.

Wet nap is a term commonly used for a “wet wipe”, a manufactured paper tissues that comes pre-moistened. They are often provided after a meal at some restaurants after a finger-food dish, or perhaps as a refresher on an airplane. I think that “nap” is short of “napkin”, and that “Wet-Nap” is a brand name.

The Italian town of Assisi is in Umbria. Assisi is famous as the birthplace of St. Francis and as the home to the Franciscan religious order. It was also the home to Saint Clare and her order of the Poor Sisters (later known as the Poor Clares).

Carrie Chapman Catt founded the League of Women Voters and the International Alliance of Women. Catt was also very close to Susan B. Anthony and succeeded Anthony as head of the National American Woman Suffrage Association.

“Endgame” is a 1957, one-act play written by Irishman Samuel Beckett. Beckett actually wrote “Endgame” in French (naming it “Fin de Partie”), and translated it himself into English.

7UP was introduced to the world as “Bib-Label Lithiated Lemon-Lime Soda”, and was a patent medicine that contained lithium citrate, a mood-stabilizing drug. The introduction of a mood-stabilizing medication was pretty timely, as 1929 Wall Street Crash happened just two weeks later. 7UP’s “Uncola” advertising campaign dates back to 1967.

San Francisco International Airport (SFO) serves as the main base of operations for Virgin America (sold to Alaska Airlines not that long ago), and is also the maintenance hub for United Airlines.

The “CSI” franchise of TV shows has been tremendously successful, but seems to have finally wound down. “CSI: Miami” (the “worst” of the franchise, I think) was cancelled in 2012 after ten seasons. “CSI: NY” (the “best” of the franchise) was cancelled in 2013 after nine seasons. The original “CSI: Crime Scene Investigation”, set in Las Vegas, hung in there until 2015 when it ended with a two-hour TV movie. The youngest show in the series was “CSI: Cyber”. It lasted for two seasons, before being canceled in 2016.

“Agita” is another name for “acid indigestion”, and more generally can mean “agitation, anxiety”.

Donald Trump’s Taj Mahal Casino Resort opened up for business in Atlantic City in 1990. Donald Trump exited the casino business in 2016 after his gambling empire went bankrupt. The Taj stayed open under new ownership for a year, but was resold and rebranded as a Hard Rock property in 2017.

“Meth” is a street name used for the drug methamphetamine, also called “crank” and “crystal meth”.

“Stan Against Evil” is a comedy horror TV show about demons haunting a New Hampshire town that was once the site of witch-burning. Nope …

The Irish singer Enya co-wrote and performed two songs for the 2001 film “The Lord of the Rings: The Fellowship of the Ring”. Her song “May It Be” was nominated to that season’s Best Original Song Academy Award. The second number, called “Aniron”, was sung in Tolkien’s Elvish language called Sindarin.

A brownfield site is land that was previously used for industrial or commercial purposes. Such land might be contaminated with hazardous waste and in need of clean up.