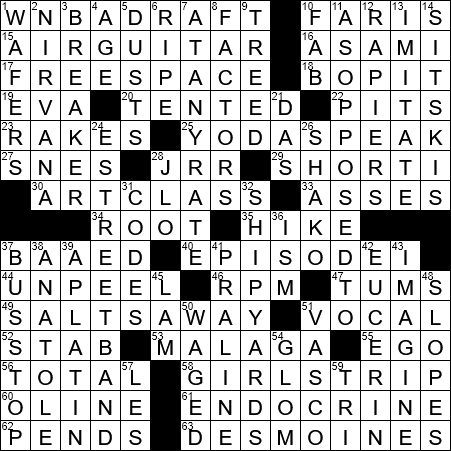 1. Selection process including the Sky and the Sun : WNBA DRAFT

“The Emoji Movie” is a 2017 animated film that has been panned widely by the critics. It did do well at the 38th Golden Raspberry awards, winning for Worst Picture, Worst Director, Worst Screen Combo and Worst Screenplay.

18. Hasbro game that requires twisting and pulling : BOP IT

To fumigate something is to apply smoke or gas, especially in order to destroy pests. Back in the late 1300s, fumigation was the using of aromatic smoke for ceremonial purposes. The term “fumigation” comes from the Latin “fumigare” meaning to smoke, which is the verb derived from “fumus” meaning “smoke”.

Here are some of the wiser sayings of the “Star Wars” character Yoda:

J. R. R. (John Ronald Reuel) Tolkien was an English author best known by far for his fantasy novels “The Hobbit” and “The Lord of the Rings”. Although Tolkien lived in England and was a professor at Oxford, he served for many years as an external examiner at my old school, University College Dublin in Ireland.

The central letter in the word “visitor” is a short letter I.

Believe it or not, there is a website called “EweTube”. It is based in Australia, and seems to feature cute videos featuring sheep and lambs.

40. Ironically, designation for the fourth film release in a classic sequence : EPISODE I

The main ingredient in Tums antacid, made by GlaxoSmithKline, is calcium carbonate. Tums have been on the market since 1930. If you want to save a few pennies, Target brand antacid is identical to Tums, so I hear …

49. Saves for the future : SALTS AWAY

To salt away is to put aside safely for the future, and usually refers to something of value like money. The use of “salt” here is a figurative usage of the verb in the sense of preserving, as in salting meat for a future meal.

Someone described as taciturn is disposed to be silent. The term “taciturn” comes from the Latin “tacitus” meaning “silent”.

To have a whack, take a stab, is to give it a try.

Málaga is the capital city of the autonomous community of Andalusia in Spain. Located on the Mediterranean coast, Málaga is considered the southernmost large city in Europe, and lies about 80 miles north of Africa. Included in the list of notable people born in Málaga are artist Pablo Picasso, and Hollywood actor Antonio Banderas.

“Girls Trip” Is a 2017 comedy movie. I haven’t seen this one, but I hear good things about it. It was chosen as one of the top 10 films of 2017 by “Time” Magazine. Before girls that go on the trip are played by Regina Hall, Queen Latifah, Tiffany Haddish and Jada Pinkett Smith.

Apparently, something that is described as “dope” is really, really cool …

A shako is a tal, cylindrical cap with a visor that is used by some military organizations. Nowadays used only ceremonially, they shakos will often feature a feather, plume or pompon at the top, usually at the front. The term “shako” (sometimes “chako”) comes from “csákó”, which is the the Hungarian name for the cap.

“Anatole France” was the pen name for French poet and novelist François-Anatole Thibault. France won the Nobel Prize for Literature in 1921.

A praline is a candy made made out of nuts and sugar syrup. The first pralines were made in France in the 17th century for an industrialist named Marshal du Plessis-Praslin, who gave his name to the confection.

42. Skincare brand from the Greek for “beautiful wax” : EUCERIN

Eucerin is a line of body and face care products manufactured German personal-care company Beiersdorf. The brand name “Eucerin” originally applied to an emulsifying agent that was patented in Germany in 1902, and which was made from Eucerit (lanolin), water and oil.

Vasco da Gama left on his first voyage of discovery in 1497. da Gama journeyed around the Cape of Good Hope, the southernmost tip of Africa, and across the Indian Ocean making landfall in India. Landing in India, his fleet became the first expedition to sail directly from Europe to the sub-continent. Vasco da Gama was well known for acts of cruelty, especially on local inhabitants. One of his milder atrocities was inflicted on a priest whom he labelled as a spy. He had the priest’s lips and ears cut off, and sent him on his way after having a pair of dog’s ears sewn onto his head.

“Glom” is a slang term meaning “steal”, although it can also be used to mean “latch onto” when used as “glom onto”. The term probably comes from the Scots word “glam” meaning “to snatch at”.