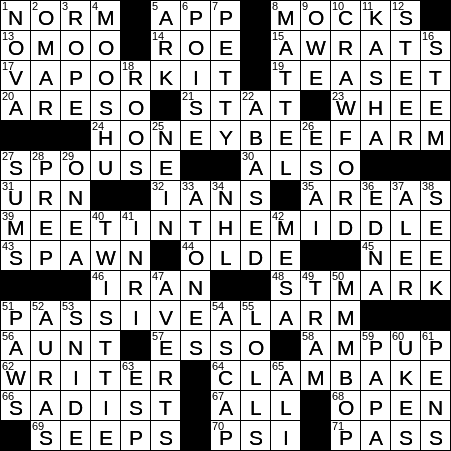 Themed answers each include a kind of “MEAT” somewhere IN THE MIDDLE as a hidden word:

The character of Norm Peterson was the only customer of the bar to appear in every episode of “Cheers”, something that one couldn’t really call ironic since he loved that barstool! George Wendt played Norm. I suppose the fact the Wendt was expelled from Notre Dame after one semester with a 0.0 GPA, that might have helped him get the role!

24 Place for an apian colony : HONEY BEE FARM (“beef” in the middle)

Something described as apian is related to bees. “Apis” is Latin for “bee”.

48 One of the four Evangelists : ST MARK

There are two classes of car alarm, namely passive and active. A passive alarm turns on automatically when the vehicle’s doors are locked after the ignition is turned off. There is no need for the driver to set the alarm, hence the term “passive”. An active alarm requires the driver’s intervention for arming.

That would be (American) football.

Omar Khayyam was a Persian with many talents. He was a poet as well as an important mathematician, astronomer and physician. A selection of his poems were translated by one Edward Fitzgerald in a collection called “Rubáiyát of Omar Khayyam”. Here are some famous lines from that collection:

Something or someone described as picayune is of little value or importance, or perhaps petty and small-minded. The original picayune was a Spanish coin worth half a real, which was not a lot of money.

The toy company Fisher-Price was founded in 1930 by Herman Fisher and Irving Price, along with Margaret Evans Price and Helen Schelle. The company’s first toy was introduced the following year. It was a pull-along duck named Dr. Doodle.

“Mommie Dearest” is a 1978 memoir written by Christian Crawford, the daughter of actress Joan Crawford. The book did not paint Joan in a good light, with claims of alcoholism and neglect of her four children.

The Germanic peoples of Northern Europe are often called “Teutonic”, a term which originated with the Teutons, one of the Germanic tribes that lived in the region in the days of ancient Greece and Rome.

34 Org. with Canadiens and Canucks : NHL

The Canucks are Vancouver’s professional hockey team, a franchise that joined the National Hockey League in 1970 as an expansion team. “Canuck” is a slang term for “Canadian”.

Edna St. Vincent Millay was an American poet and playwright, and the third woman to receive the Pulitzer Prize for Poetry (in 1923 for “The Ballad of the Harp-Weaver”). Millay was noted not only for her work, but also for the open arrangement that she and her husband had in their marriage. Millay took many lovers, including the poet George Dillon, for whom she wrote a number of sonnets.