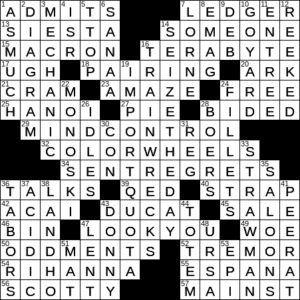 “Turn Around, Look at Me” is a 1961 song co-written by Glen Campbell that was destined to be Campbell’s first song to make it into the US charts. Cover versions were recorded by the Lettermen and the Bee Gees, but it is the version recorded by the Vogues that was the most successful. The Vogues version was used by Volkswagen in a 2019 commercial.

When Emmanuel Macron became President of France in 2017, he was 39 years of age, and so became the youngest person to ever hold that office.

“The Manchurian Candidate” is a 1959 Cold War novel by Richard Condon that famously was adapted into a 1962 film of the same name starring Frank Sinatra. There was also a 2004 big-screen adaptation of the novel that starred Denzel Washington. The 1962 film cost about $2.2 million to make, with Sinatra’s salary accounting for almost half of the budget.

The city of Venice (“Venezia” in Italian) in northeast Italy is built in a saltwater lagoon on the Adriatic Coast, on 117 small islands. The classic transportation along the waterways is the gondola, but this is really only used for tourists these days, as well as on ceremonial occasions. The locals rely on the motorized water-buses.

In Spanish, “Francia” (France) is a neighbor of “España” (Spain) in Europe.

In the “Star Trek” series on television and in the movies, the colorful character named Scotty was played by Canadian actor James Doohan. Doohan joined the Royal Canadian Artillery at the start of WWII, and participated in the D-Day Invasion of Normandy. After surviving the landing, that same day Doohan was shot by one of his own men in a tragic mishap. Doohan was hit six times, with a bullet to his chest stopped by a silver cigarette case he was carrying. One of Doohan’s fingers was shot off in the incident. He managed to conceal that injury during his acting career.

Salon.com is a popular online magazine, one of the first “ezines” ever published. “Salon” focuses on American politics and current affairs, but also has articles about books, music and films. The magazine was launched in 1995, and managed to survive many loss-making years. Most of Salon’s content is free, but it does make money by offering a premium service with extra content, and by selling ad space.

In baseball slang, “to go yard” is to hit a home run, to hit the ball the length of the ball “yard”.

The Great Trek was a mass migration of Dutch-speaking citizens from Britain’s Cape Colony in Southern Africa starting in 1836. The migration took the form of a wagon train towards the northeast of the continent and away from British rule. Eventually, the areas settled by both the British and the Dutch became part of today’s Republic of South Africa.

A straw man can be an insubstantial argument that is floated purely with the intent of knocking it down, just like a man made of straw. The idea is that in so doing, one is ridiculing anything that can be related to the straw-man argument.

Former teen idol Donny Osmond was a member of the Osmond Brothers singing group that appeared for years on the “The Andy Williams Show”. At the height of his solo career, Donny teamed up with his younger sister Marie Osmond in their own variety show called “Donny & Marie”. The pair have been working together ever since and have been appearing at the MGM Grand in Las Vegas since 2008.

The Osmond Brothers were performing at Disneyland in the early sixties when they were spotted by Andy Williams’ father. He was so impressed by their performance that he told Andy to book them on his TV show, after which they became regulars from 1962-69.

“Totem” is a word used to describe any entity that watches over a group of people. As such, totems are usually the subjects of worship. Totem poles are really misnamed, as they are not intended to represent figures to be worshiped, but rather are heraldic in nature often celebrating the legends or notable events in the history of a tribe.

Sweep this clue under the mat …