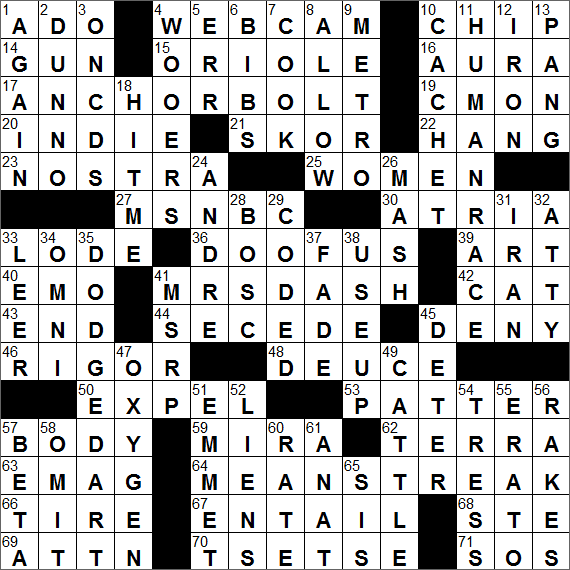 Theme: Run to the End

Today’s themed answers ends with a synonym of “run”.

Skor is a candy bar produced by Hershey’s. “Skor” is Swedish for “shoes”, and the candy bar’s wrapping features a crown that is identical to that found in the Swedish national emblem. Skor is sold in Canada as Rutnam.

Apparently “Cosa Nostra” is the real name for the Italian Mafia. “Cosa Nostra” translates as “our thing” or “this thing of ours”. The term first became public in the US when the FBI managed to turn some members of the American Mafia. The Italian authorities established that “Cosa Nostra” was also used in Sicily when they penetrated the Sicilian Mafia in the 1980s. The term “Mafia” seems to be just a literary invention that has become popular with the public.

Wyoming is nicknamed “the Equality State”, and the state motto is “Equal Rights”. In 1869, Wyoming was the first state (although it was a territory back then) to give women the right to vote. The following year, the first women to serve on juries did so in Wyoming.

“Morning Joe” is a show broadcast by MSNBC each weekday morning. It is hosted by Joe Scarborough, and first went on the air in 2007. Given the name of the show, Starbucks were very content being the show’s sponsor from 2009 through 2013, and got lots of product placement.

Art Nouveau (French for “new art”) is a style that was popular from 1890 to 1910. Although the English-speaking world adopted the French name for the style, Art Nouveau was known as “Jugendstil” in Germany, “Modern” in Russia and “Stile Liberty” in Italy.

Iams dog food was produced by the animal nutritionist Paul Iams. He felt that household pets were suffering somewhat by being fed a diet of table scraps, so he developed a dry dog food that he felt was more nutritious and suitable for pet dogs. He founded the Iams company, now part of Procter & Gamble, in 1946.

In tennis, if the score reaches “deuce” (i.e. when both players have scored three points), then the first player to win two points in a row wins the game. The player who wins the point immediately after deuce is said to have the “advantage”. If the player with the advantage wins the next point then that’s two in a row and that player wins the game. If the person with the advantage loses the next point, then advantage is lost and the players return to deuce and try again. If the one of the players is calling out the score then if he/she has the advantage then that player announces “ad in” or more formally “advantage in”. If the score announcer’s opponent has the advantage, then the announcement is “ad out” or “advantage out”. Follow all of that …?

Mira Sorvino is an American actress, winner of an Oscar for her supporting role in the 1995 Woody Allen movie “Mighty Aphrodite”. Sorvino also played a title role opposite Lisa Kudrow in the very forgettable “Romy and Michele’s High School Reunion”.

The name “terra cotta” comes to us from Latin via Italian and means “baked earth”. Terra cotta is a ceramic made from clay which is left unglazed. Maybe the most famous work in terra cotta is the Terracotta Army, the enormous collection of life-size figures that was buried with the Qin Shi Huang, the First Emperor of China around 210 BC. I had the privilege of seeing some of this collection when it toured the US a few years ago, and just the few pieces on display were so very impressive.

Firestone is a tire company founded by Harvey Firestone in 1900. The Firestone company took off when it was selected by Henry Ford as the supplier of tires for his Model T.

“To decoct” is to extract the flavor of a liquid by boiling down and increasing the concentration. A related term is “to concoct”, meaning “to boil together”. We use the verb “to concoct” in figurative sense to mean to contrive, devise.

“Cachet” is a French word that we use in English for an official seal, usually one applied to a document. We also use the term figuratively. When we say that something has “a certain cachet”, we are implying that it has a certain level of prestige, as if some authority has given it a seal of approval.

“The Last Man” is an 1826 science fiction novel by Mary Shelley, author of the Gothic novel “Frankenstein”, and husband of poet Percy Bysshe Shelley. “The Last Man” is an apocalyptic tale, describing a future in which the human race has been decimated by a terrible plague.

Renowned tennis professional Andre Agassi was nicknamed “the Punisher”, because of the efficiency with which he ran most of his opponents around the court. He wrote an autobiography called “Open”, published in 2009. An amazing revelation in the book is that Agassi’s famous head of hair was actually a wig for much of his playing career. Can you imagine how hard it must have been to play tennis at his level with a rug stuck on?

Bosc is a cultivar of the European Pear grown in the northwest of the United States. The Bosc is that pear with a skin the color of a potato, with a long neck. I always seem to use the potato as my point of reference. How Irish am I …?

In the world of word puzzles, a “cryptogram” is a short piece of encrypted text that is solved by working out which letters have been substituted for which letters. I think cryptograms are my favorite type of word puzzle, after the crossword of course …

Before 1935 the country we know today as Iran was called Persia by the Western world. The official name of the country since the Iranian Revolution of 1979 is the “Islamic Republic of Iran”.

The official name of the country is the Islamic Republic of Pakistan. The name “Pakistan” translates from both Persian and Urdu as “Land of the Pure”.

The Dodge Dart was originally produced by Chrysler from 1960 to 1976 in North America. The Dodge Dart name was resurrected in 2013 when Chrysler introduced it as a new compact passenger automobile.

Although pressurized oxygen tanks are available as a backup, water is the main source of oxygen on the International Space Station (ISS). The ISS’s large solar arrays provide electrical power that is used to electrolyse water into its constituent elements of hydrogen and oxygen. The explosive hydrogen is vented into space.

Irish nationalist Robert Emmet led the unsuccessful 1803 rebellion against the British, for which he was hung, drawn and quartered.

In Greek mythology, Erato was the Muse of lyric poetry and is often depicted playing a lyre.

In the world of software development, the first tested issue of a new program is usually called the “alpha” version. Expected to have a lot of bugs that need to be fixed, the alpha release is usually distributed to a small number of testers. After reported bugs have been eliminated, the refined version is called a “beta” and is released to a wider audience, but with the program clearly labeled as “beta”. The users generally check functionality and report further bugs that are encountered. The beta version feeds into a release candidate, the version that is tested just prior to the software being sold into the market, bug-free hopefully …

4…Device for a selfie video..WEBCAM

45…Refuse to confess to, as charges..DENY

3…How music may be sold..ON CDS

60…Rank according to ability, say..RATE