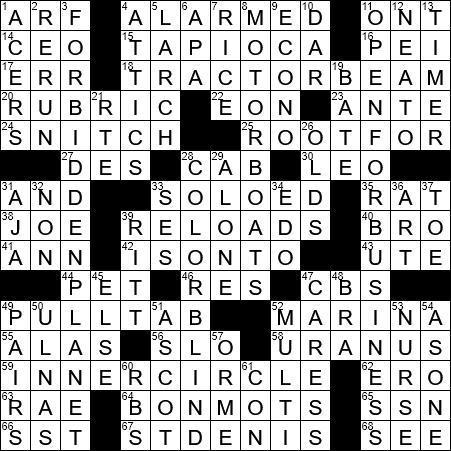 Themed answers each include an INNER CIRCLE, i.e. the hidden word “ORB”:

Prince Edward Island (PEI) is a maritime Canadian province. The island at the center of the province was named for Prince Edward, the fourth son of King George III and the father of Queen Victoria.

20. Set of guidelines, as for grading papers : RUBRIC

In Medieval illuminated manuscripts, sections of text that are highlighted in red ink are known as rubrics. Often a rubric would be seen at the top of a page, and we tend to use the term “rubric” for a title or a name. “Rubric” comes from the Latin “rubrica”, the red ocher used in making the red pigment used in ink. “Rubric” has evolved to mean an authoritative rule or direction.

“In media res” is a Latin phrase that translates as “into the middle of things”. We use “in media res” to describe a literary technique in which a story starts at some point other than the beginning of the plot.

The “Big Brother” television franchise started out in 1999 in the Netherlands. The term “Big Brother” comes from George Orwell’s novel “Nineteen Eighty-Four”.

There are several mnemonics used to remember the planets and the order in which they are found in the Solar System. One example is “My Very Easy Method Just Shows Us Nine Planets”, but that doesn’t really work since Pluto was relegated from “planethood”. The most oft-quoted mnemonic for the eight planets is “My Very Eager Mother Just Served Us Nachos”. Given the relegation of Pluto, I kind of like “Many Very Educated Men Just Screwed Up Nature”.

A ranchero is someone who owns, operates or is employed on a ranch, and is a word with Spanish roots.

Actress Sally Field first came to the public’s attention in the sixties with title roles in the TV shows “Gidget” and “The Flying Nun”. She has two Best Actress Oscars: one for “Norma Rae” (1979) and one for “Places in the Heart” (1984).

Not only is Saint Denis (also “Denys”) the patron saint of France, but he is also the patron saint of Paris. Denis was the first Bishop of Paris, in the 3rd century AD, and was martyred by having his head chopped off. The legend surrounding this event is that the executed Denis picked up his head and walked for six miles, delivering a sermon the whole way.

The sport of water-skiing dates back to 1922, when it was invented by one Ralph Samuelson on Lake Pepin, located on the Mississippi River near Saint Paul in Minnesota.

Ransom Eli Olds was a pioneer in the automotive industry, and the founder of the Oldsmobile and REO brands. Olds introduced the first modern “stationary” assembly line (Henry Ford’s famous innovation was the “moving” assembly line).

Aja Naomi King is an actress from Southern California who plays Michaela Pratt on the legal drama “How to Get Away with Murder”.

Martin Ritt is best remembered as a television and movie director. During the bad old days of the “Red Scare”, Ritt was working in television until he found himself on a blacklist for supposed support of Communist causes. He turned to the theater for work until the Red Scare had run its course, and then moved into the world of film. Some of his best known movies are “Hud”, “The Great White Hope” and “Norma Rae”.

I don’t like many westerns, to be honest, but the 1963 movie “Hud” is a classic. It stars Paul Newman and Patricia Neal and is an adaptation of a novel by Larry McMurtry called “Horseman, Pass By”. Patricia Neal’s role in the film was relatively small, yet her performance was enough to earn her an Academy Award for Best Actress.