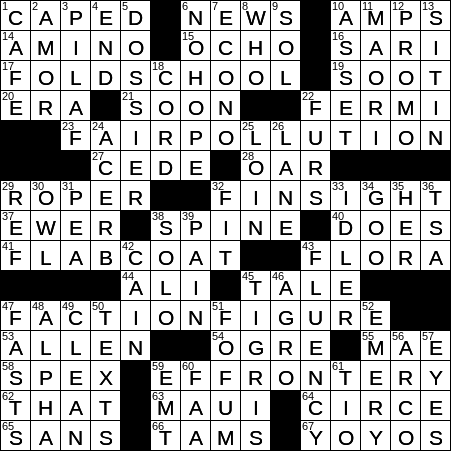 Themed answers are common phrases that have a letter F (EF) placed in FRONT:

That would be rock music blasting away.

The amino acids glutamic acid and aspartame are used in the food industry. The sodium salt of glutamic acid is monosodium glutamate (MSG), a flavor enhancer that imparts a savory taste. Aspartame is an artificial sweetener composed of aspartic acid and phenylaniline joined by a peptide bond.

22. Physicist who left Italy in 1938 to protect his Jewish wife : FERMI

The Federal National Mortgage Association is commonly called “Fannie Mae”, a play on the initialism FNMA. Fannie Mae was founded in during the Great Depression as part of President Roosevelt’s New Deal.

Ginnie Mae is the familiar nickname for the Government National Mortgage Association (GNMA), a government-owned corporation created in 1968 with the objective of promoting home ownership. The “Ginnie Mae” nickname is derived from the GNMA abbreviation.

Circe is a minor goddess in Greek mythology, the goddess of magic. She was fond of transforming those who did not please her into animals by using magical potions.

The first yo-yos date back to at least 500 BC. There is even an ancient Greek vase painting that shows a young man playing with a yo-yo. Centuries later Filipinos were using yo-yos as hunting tools in the 1500s. “Yo-yo” is a Tagalog (Filipino) word meaning “come-come” or simply “return”.

Our words “provide” and “purvey” have similar meanings, and both derive from the Latin verb “providere” meaning “to supply”.

A dossier is a collection of papers with information about a person or subject. “Dossier” is a French term meaning “bundle of papers”.

“Acerb” is a variant of “acerbic”, with both terms meaning “sour, bitter-tasting, acidic”.

Owl is one of the characters in A. A. Milne’s classic children’s tales featuring “Winnie-the-Pooh”. Owl is often depicted today as the archetypal “wise old owl”, but in the original books he tends not to exhibit very good judgment.

“I Saw Her Standing There” is a Beatles song that was released in 1963 as the B-side to “I Want to Hold Your Hand”. Paul McCartney is the lead singer, and indeed was the primary composer of the song. That said, John Lennon performed a live version of the song in 1974 with the Elton John Band that was released as the B-side to Elton John’s “Philadelphia Freedom” single.

As Cain was the first murderer according the Bible, he is associated with evil or trouble. The idiom “raise Cain” is the equivalent of “raise Hell” and “raise the Devil”. In all cases, the meaning is to bring back evil or to cause trouble.

The Fertile Crescent is a large swath of land in the Near East that includes the Nile Valley in the west and the land around the Tigris and Euphrates in the east.

The line “fee-fi-fo-fum” (with various spellings) comes from the famous English fairy tale “Jack and the Beanstalk”. Within the story, the giant at the top of the beanstalk utters a little poem when he detects the presence of Jack: