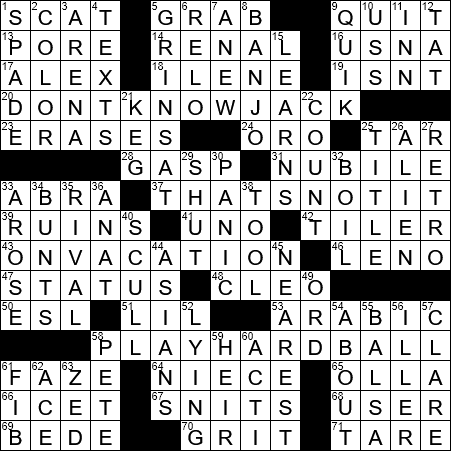 Today’s Theme (according to Bill): Haven’t a “Clue”?

Themed answers are common phrases reinterpreted as though the last word is the title of a movie:

“Jack” is a 1996 film directed by Francis Ford Coppola that stars the amazing Robin Williams as a boy who ages four times faster than normal. For most of the movie, Williams is playing a 10-year-old boy in the body of a 40-year-old man. I’d guess Williams was a shoo-in for the role …

In Spanish, one might win “oros” (golds) at “los Juegos Olímpicos” (the Olympic Games).

The word “nubile” can mean “of a marrying age” or ”sexually attractive”. The word generally applies to young women, and comes from the Latin “nubere” meaning “to take a husband”.

“It” is a 1986 horror novel penned by Stephen King. The title character is a demon who preys on children, primarily appearing in the form of Pennywise the Dancing Clown. The novel was adapted into a 1990 miniseries of the same name. I don’t do Stephen King …

“Vacation” is a 2015 comedy film starring Ed Helms as Rusty Griswold and Christina Applegate as his wife Debbie Fletcher Griswold. This is a reboot of the celebrated “National Lampoon’s Vacation” series of films. Chevy Chase and Beverly D’Angelo reprise their roles as Rustys parents Clark and Ellen Griswold.

Actress Christina Applegate started her career as a child actress in the sitcom “Married… with Children”. More recently, Applegate co-starred in the show “Up All Night”.

The numbers that we use in English and most other languages (0, 1, 2, 3 etc.) are Arabic numerals, also called Hindu-Arabic or Indo-Arabic numerals. The concept of positional numbers was developed by the Babylonians, and the first use of “zero” is attributed to mathematicians in the Indian subcontinent.

“Hardball” is a 2001 film in which Keanu Reeves plays an indebted gambler who is forced to coach a baseball team of troubled fifth-graders. The film is inspired by a true story, and a book by Daniel Coyle titled “Hardball: A Season in the Projects”. However, the real-life coach Bob Muzikowski attempted to get the film’s release blocked as he claimed that it misrepresented him and the kids on the team.

Paella is sometimes referred to as the Spanish national dish, but not by Spaniards. In Spain, paella is regarded as a typical regional dish from Valencia.

The Venerable Bede was a monk in the north of England in the eighth century AD. Saint Bede is mainly known as an author and scholar, publisher of “The Ecclesiastical History of the English People”. In his writings, Bede struggled with the two common ways of referring to dates at that time. Bede turned to the anno domini dating method that had been devised by Dionysius Exiguus in 525. Bede’s writings of circa 730 were extremely influential and helped popularize the “anno domini” method.

Earl Scruggs and Lester Flatt are the musicians who founded the bluegrass band called the Foggy Mountain Boys in 1948.

Nestlé Quik was introduced in 1948, and is a flavored powdered milk drink. It was sold in Europe as “Nesquik”, and that brand name replaced “Quik” here in the US in 1999. The Nesquik mascot is the Quik Bunny. The Quik Bunny had a large “Q” on a collar around his neck, and with the brand name change this “Q” became an “N”, and he is now known as the Nesquik Bunny.

The 1979 sci-fi horror movie “Alien” was the big break for Sigourney Weaver as it was her first lead role, and her character ended up as central to a whole set of sequels. The movie’s producers made a very conscious decision to cast a female in the lead role so as to have the film stand out in the male-dominated genre of science fiction. Famously, the film was publicized with the tagline “In space no one can hear you scream”.

Balsa is a very fast-growing tree that is native to parts of South America. Even though balsa wood is very soft, it is actually classified as a hardwood, the softest of all the hardwoods (go figure!). Balsa is light and strong, so is commonly used in making model airplanes. Amazingly, in WWII a full-size British plane, the de Havilland Mosquito, was built largely from balsa and plywood. No wonder they called it “The Wooden Wonder” and “The Timber Terror”.

Shannon Airport in the West of Ireland was the first place in the world to offer duty-free shopping. Shannon was also where the Irish Coffee originated, despite many claims to the contrary …

58 Townshend of The Who : PETE

Early in William Shakespeare’s play “Romeo and Juliet”, Juliet espies Romeo for the first time, and says to her nurse, “Go ask his name.—If he be married / My grave is like to be my wedding bed. The nurse replies, “His name is Romeo, and a Montague, / The only son of your great enemy.” Things don’t go well …

There are two letters Z (zeds) in the word “jazz”.