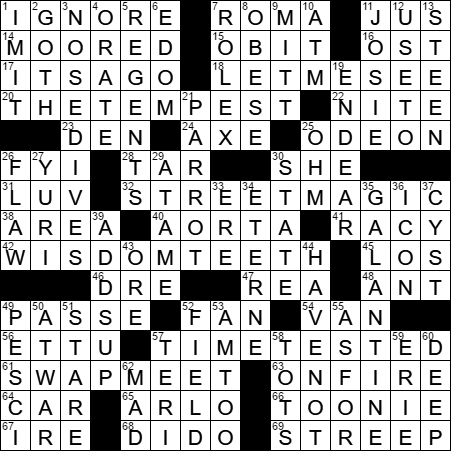 Today’s themed answers each contain the letter string MEET, but those letters have been SWAPPED around, jumbled:

Monte Mario is the highest hill in Rome, although it isn’t one of the “Seven Hills of Rome”. That’s because Monte Mario lies outside the boundaries of the ancient city.

The French term “au jus” is usually translated as “with it’s own juice”.

William Shakespeare’s play “The Tempest” tells the story of Prospero, who was removed from the throne of Milan and banished to a deserted island along with his daughter Miranda. The island is home to a devilish character called Caliban, who is forced into slavery on the arrival of the exiles. Prospero learns sorcery while cast away, and eventually conjures up a tempest that drives those who usurped his throne onto the island’s shores (in particular his own brother, Antonio). On the island, Prospero is eventually successful in revealing Antonio’s lowly nature.

A busker is a street performer, a person entertaining passersby for tips. Some very successful people have spend periods of their lives busking. George Michael used to busk near the London Underground. Rod Stewart performed in the streets of Paris and Barcelona, and was eventually deported from Spain for vagrancy.

Wisdom teeth are an extra set of molars in the back of the jaws. There are usually four wisdom teeth, and they only occur in about 65% of the population.

“Toonie” is the familiar name for a two-dollar coin in Canada. A kind blog reader pointed out that the one-dollar bill was replaced with the “loonie” coin, a nickname that comes from the “loon” bird that is on one side of the coin.

Dido was the founder of Carthage, and the city’s first queen.

Meryl Streep has had more nominations for an Academy Award than any other actor, which is a tribute to her talent and the respect she has earned in the industry. I am not a huge fan of her earlier works but some of her recent movies are now on my list of all-time favorites. I recommend “Mamma Mia!” (you’ll either love it or hate it!), “Julie & Julia”, “It’s Complicated” and ”Hope Springs”.

The goth subculture developed from the gothic rock scene in the early eighties, and is a derivative of the punk music movement. It started in England and spread to many countries around the globe. The term “goth” of course comes from the Eastern Germanic tribe called the Goths.

A regent is a member of the governing body of a university.

Edom is an ancient Iron Age kingdom located in the south of modern-day Jordan. The area is known for its red-colored sandstone, which gave the kingdom its name. The Hebrew word “Edom” translates as “red”.

My most prized possession is a beautiful stainless steel Rolex watch that my uncle bought while serving with the RAF in Canada during WWII. Rolex watches were made available to the Canadian servicemen at that time as they were shipping overseas. My uncle brought his Rolex home to Ireland after the war. He needed money for booze one weekend and so sold the watch to my Dad, for five pounds. My Dad gave it to me just before he died, as he knew I loved the watch, and my brothers weren’t interested in it all. Not so long ago I had the watch appraised ($3,000), and my brothers suddenly took a liking to it! Still, it’s not something that will ever be sold, that’s for sure …

“Josie and the Pussycats” is a comic book aimed at teens, published from 1963 to 1982. The title characters are an all-female rock band.

The Russian cosmonaut Yuri Gagarin became the first man in space when his spacecraft Vostok I made a single orbit of the Earth in 1961. Sadly, Gagarin died only seven years later in a plane crash.

As You Like It is one of Shakespeare’s comedies, the tale of Rosalind fleeing from her Uncle’s court along with her cousin Celia and the court jester Touchstone. Rosalind lives in exile in the Forest of Arden, disguised as a male shepherd called Ganymede. The play is perhaps most memorable for an oft-quoted monologue that starts with:

All the world’s a stage,
And all the men and women merely players …

A galentine is a dish usually made with poultry or fish that has been deboned. A galentine is often elaborately decorated, partially because it’s a lot of work getting all those bones out and a fancy garnish isn’t that much extra work!

Lackawanna is a city in New York State, located on Lake Erie. Lackawanna was in the news relatively recently with the arrest of the “Lackawanna Six” in 2002. The group of six Lackawanna residents were found guilty of providing “material support” to Al-Qaida.

61. Collectors’ event, and a hint to what’s hidden in the answers to starred clues : SWAP MEET