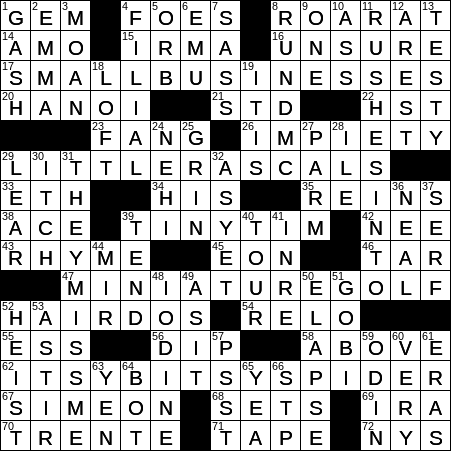 Alexander Hamilton was one of America’s Founding Fathers, chief of staff to General George Washington and the first Secretary of the Treasury. It was Hamilton who founded the nation’s first political party, the Federalist Party. He is also famous for fighting a duel with Vice President Aaron Burr, which resulted in Hamilton’s death a few days later.

Aaron Burr was the third vice-president of the US, serving under Thomas Jefferson. In the final year of his term in office, Burr fought an illegal duel and killed his political rival Alexander Hamilton. Burr wasn’t brought to justice, but he did pay the price politically. Thomas Jefferson dropped him from his ticket in the election held the following year.

Irma Rombauer was the author of the famous cookbook “The Joy Of Cooking”. Rombauer self-published the book back in 1931 in St. Louis, Missouri. She and her family continued to publish privately as demand was high, and then a commercial printing house picked it up in 1936. “The Joy of Cooking” has been in print continuously ever since.

29. Alfalfa, Darla and friends, with “the” : LITTLE RASCALS

Alfalfa was one Hollywood’s “Little Rascals”, also known as “Our Gang”. Alfalfa’s real name was Carl Switzer. He and his brother were quite the young performers around his hometown in Illinois, singing and playing instruments. On a trip to California, the Switzer family were touring the Hal Roach movie studio and were fooling around in the studio cafeteria, basically giving an impromptu performance. Hal Roach happened to be there at the time, and signed both brothers up for roles in “Our Gang”. Carl was to play “Alfalfa”, and brother Harold played “Slim” (aka “Deadpan”).

The game of “twenty-one” was first referred to in a book by Cervantes, the author famous for writing “Don Quixote”. He called the game “ventiuna” (Spanish for “twenty-one”). Cervantes wrote his story just after the year 1600, so the game has been around at least since then. Twenty-one came to the US but it wasn’t all that popular so bonus payments were introduced to create more interest. One of the more attractive bonuses was a ten-to-one payout to a player who was dealt an ace of spades and a black jack. This bonus led to the game adopting the moniker “Blackjack”.

There’s a letter S (ess) in the middle of the initialism MST, which stands for Mountain Standard Time.

William Randolph Hearst got into publishing when he took over “The San Francisco Examiner” from his father George Hearst. Beyond his work in the newspaper business, William Randolph Hearst was also a politician and represented a district of New York in the US House. His life was the inspiration for the lead role in the 1941 movie “Citizen Kane” with Orson Welles playing the Hearst-like character. If you’re ever driving along the coast between Los Angeles and San Francisco, I’d recommend a stop at Hearst Castle, William Randolph’s magnificent estate located near San Simeon.

Andrew Cuomo won the gubernatorial election for the State of New York in 2010. Andrew is the son of former Governor of New York Mario Cuomo. Andrew was also married for 13 years to Kerry Kennedy, a daughter of Robert F. Kennedy.

“La La Land” is a 2016 romantic musical film starring Ryan Gosling and Emma Stone as a musician and actress who fall in love in “La La Land” (Los Angeles, i.e. LA). The film was written and directed by Damien Chazelle, who had found success two years earlier with the musical drama “Whiplash”. “La La Land” won a record-breaking seven Golden Globes and tied for the record number of Oscar nominations at fourteen, winning six.

Something “filial” is related to a son or daughter. The term comes from Latin, in which language “filius” means “son” and “filia” means “daughter”.

“How sweet it is!” was perhaps Jackie Gleason’s most famous catchphrase. Gleason grew up in Brooklyn, and drivers entering the borough today via the Brooklyn Bridge are greeted by a road sign announcing “How Sweet It Is!”

Parmigiana is a dish from southern Italy. The original parmigiana was made with an aubergine (eggplant) filling, with cheese and tomato layers and then baked. Versions originating outside of Italy have replaced the aubergine with breaded cutlets of chicken or veal.

Patricia Neal won her Best Actress Oscar relatively late in her career, for playing the middle-aged housekeeper in 1963’s “Hud”. A few years’ later she was offered the role of Mrs. Robinson in “The Graduate” but turned it down. Famously, Neal had an affair with Gary Cooper who was married at the time. She became pregnant with his child, but he persuaded her to have an abortion. Not long afterwards Neal married British writer Roald Dahl (of “Willy Wonka” fame) and the couple had five children together before divorcing in 1983.

The modern-day, western movie called “Hud” was released in 1963 and has become a classic. “Hud” stars Paul Newman (in the title role) and Patricia Neal and is an adaptation of a novel by Larry McMurtry called “Horseman, Pass By”. Patricia Neal’s role in the film was relatively small, yet her performance was enough to earn her an Academy Award for Best Actress.

Tincture of iodine is a disinfectant. A “tincture” is a substance used in dyeing. Since the 1600s, “tincture” has also been used for a solution of medicine in an alcohol mixture.

In Norse mythology, Odin was the chief of the gods. Odin’s wife Frigg was the queen of Asgard whose name gave us our English term “Friday” (via Anglo-Saxon). Odin’s son was Thor, and his name gave us the term “Thursday”. Odin himself gave us our word “Wednesday”, from “Wodin”, the English form of his name.

A bot is computer program that is designed to imitate human behavior. It might crawl around the Web doing searches for example, or it might participate in discussions in chat rooms by giving pre-programmed responses. It might also act as a competitor in a computer game.

STP is a brand name for automotive lubricants and additives. The name STP comes from “Scientifically Treated Petroleum”.

29. Alfalfa, Darla and friends, with “the” : LITTLE RASCALS

47. Game with windmills, ramps and such : MINIATURE GOLF

11. Does without much thought : RUSHES INTO

31. College freshman’s comment about why his parents call so often : THEY MISS ME