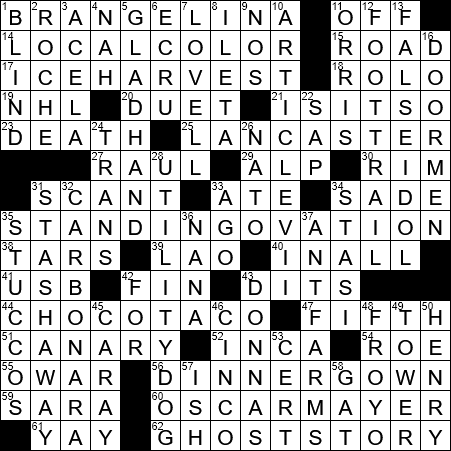 “Brangelina” is a portmanteau used for the super-couple pairing of actors Brad Pitt and Angelina Jolie. Other supercouples are/were:

“The Ice Harvest” is a 2005 action comedy based on the 2000 novel of the same name by Scott Phillips. Starring John Cusack and Billy Bob Thornton, the films main claim to fame seems to be that, in 2006, is became the last Focus Features movie to be released as a VHS tape.

The National Hockey League (NHL) was formed in 1917 in Montreal as a successor to the defunct National Hockey Association (NHA) that had been founded in 1909. Today, the NHL comprises 31 teams; 24 in the US and 7 in Canada.

Two of the biggest hits for the musical due billed as the Righteous Brothers were “Unchained Melody” and “Ebb Tide”. The vocals on both songs were performed solo, by the duo’s tenor Bobby Hatfield. Baritone Bill Medley performed lead vocals on the hit “You’ve Lost That Lovin’ Feelin'”.

The Wars of the Roses was a series of civil wars fought for the throne of England between the rival Houses of Lancaster (with a symbol of a red rose) and York (with a symbol of a white rose). Ultimately the Lancastrians emerged victorious after Henry Tudor defeated King Richard III at the Battle of Bosworth Field. Henry was crowned King Henry VII, and so began the Tudor dynasty. Henry Tudor united the rival houses by marrying his cousin Elizabeth of York. Henry VII had a relatively long reign of 23 years that lasted until his death, after which his son succeeded to the throne as Henry VIII, continuing the relatively short-lived Tudor dynasty. Henry VIII ruled from 1509 until his death in 1547. Henry VIII was the last male to lead the the House of Tudor, as his daughter Queen Elizabeth I died without issue. When Elizabeth died, the Scottish King James VI succeeded to the throne as James I of England and Ireland. James I was the first English monarch of the House of Stuart.

Raúl Juliá was a Hollywood actor from San Juan, Puerto Rico. Julia had a very distinguished career, but is perhaps best known for portraying Gomez Addams in the two film adaptations of “The Addams Family”.

I suppose that could be a swimfin, perhaps worn by a SCUBA diver on his or her feet.

A Choco Taco is an elaborate ice cream dessert that was created in the eighties by the Jack and Jill Ice Cream Company in Philadelphia.

A fifth is an American unit of volume used for liquor. It used to be equal to one fifth of a US gallon. Since the seventies, we’ve been using a “metric fifth” that is equal to 750 mL, the standard size for wine bottles around the world.

Here is a poem by Shel Silverstein from his 1974 children’s poetry collection:

Author Shel Silverstein had a varied career and did a lot more than write books. Silverstein was a poet, composer, cartoonist and screenwriter among other things. One of his successful children’s books is “The Giving Tree”, which was first published in 1964. “The Giving Tree” tells of a young boy who has a special relationship with a tree in a forest. The message of the book seems to be that the tree provides the little boy with everything he needs.

Bob Dylan’s 1976 song “Sara” is a tribute to his then-wife Sara Dylan née Noznisky. In the song, Bob describes Sara as a “radiant jewel, mystical wife”. Sadly, the couple divorced the following year.

“To glad hand”, meaning “to extend a welcome” has been around as an expression since the end of the 1800s, although it was used less cynically back then. Then along came politicians …

Jim Lovell is a retired astronaut who commanded the famous Apollo 13 mission that almost ended in disaster with three crew members lost in space. Lovell wrote an account of the dramatic mission in a book called “Lost Moon”. “Lost Moon” was the basis of the excellent movie “Apollo 13” in which Tom Hanks portrayed Lovell.

Article VII of the US Constitution deals with its ratification. Article VII called for nine states to ratify the wording of the Constitution before it would take effect.

Orris root is a basic ingredient in many perfumes, providing a so-called “base note”. It is also an ingredient in some brands of gin.

The Dalmatian breed of dog originated in Dalmatia, in the Republic of Croatia. Here in the US, Dalmatians are known as “firehouse dogs”. This association dates back to the use of Dalmatians in firehouses to guard the valuable horses that pulled the fire engines.

The Ministry for State Security in East Germany was commonly referred to as the Stasi. “Stasi” is an abbreviation for “Staatssicherheit”, which translates as “State Security”.

Stucco is a decorative coating that is applied to walls and ceilings. “Stucco” is the Italian name for the material, and a word that we imported into English.

The announcer Harry Caray was famous for exclaiming “Holy cow!” during baseball games, and used the same phrase for the title of his autobiography.

In Britain and Ireland, the phrase “dead cert” is used commonly for something that is almost certain to happen, with “cert” being short for “certainty”.

“Gat” is a slang term for a gun that is derived from the Gatling gun, the precursor to the modern machine gun. The Gatling gun was invented by Dr. Richard J. Gatling in 1861. Apparently he was inspired to invent it so that one man could do as much damage as a hundred, thereby reducing the size of armies and diminishing the suffering caused by war. Go figure …