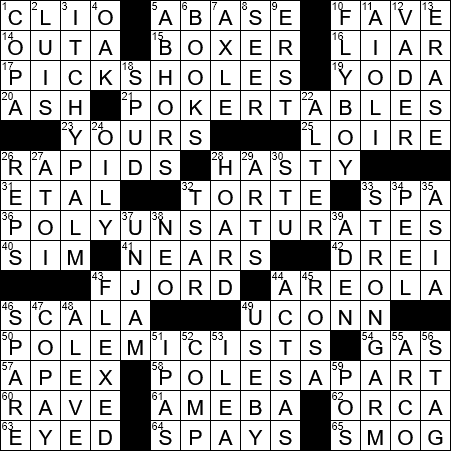 Themed answers each include the letter sequence “POLES”, with the sequence split APART, at either end of the answer:

1 Award named for a goddess : CLIO

21 *Casino fixtures where blinds might be used : POKER TABLES

49 The Huskies of the NCAA’s Big East : UCONN

“Polemic” can also be spelled “polemical”. Either way, the term describes something controversial. The word came into English from the Greek “polemos” meaning “war”. The derivative term “polemicist” can be used to describe someone who can make a skilled and aggressive attack on the opinions of another.

As you might imagine, I’ve never been to a rave, and don’t have one upcoming in my diary. And as raves often start at 2 a.m.,then I’m unlikely ever to experience one. A rave is generally an all-night party featuring loud, electronically-synthesized music usually played by a DJ as opposed to a live band.

Luis Tiant is a former Major League Baseball pitcher from Cuba. During his career, Tiant was noted for his cigar smoking. After retiring from the game, he launched a line of his own cigars called “El Tiant”.

Tradition holds that someone with itchy palms is about receive a tidy sum of money.

A roadster is a two-seater car with an open body and a sporty appearance. The term “roadster” is American in origin, and was first used back in the 19th century to describe a horse that was used when traveling by road.

A flyboy is a pilot, especially a member of an air force

Darth Vader is (to me) the most colorful antagonist in the “Star Wars” universe. Born as Anakin Skywalker, he was corrupted by the Emperor Palpatine, and turned to “the Dark Side”. In the original films, Darth Vader was portrayed by English bodybuilder David Prowse, and voiced by actor James Earl Jones. Jones asked that he go uncredited for the first two “Star Wars” films, feeling that his contributions were insufficient to warrant recognition. I disagree …

On “The Simpsons”, the character of Disco Stu is voiced by Hank Azaria, although the original intent was for him to be voiced by Phil Hartman. Disco Stu is described as “a black, wrinkly John Travolta”.

1998’s film “The Avengers” is an action movie inspired by the British television series of the same name. The film stars Ralph Fiennes and Uma Thurman as secret agents John Steed and Emma Peel. I am a big fan of the original TV show, and really did not like the 1998 movie … at all …

K2 is the second highest mountain on the planet (at 28, 251 ft), with Mount Everest being higher by over 700 feet. K2 is known the “Savage Mountain” as it is relatively difficult to climb, having claimed 1 in 4 mountaineers who have attempted to reach the summit. It has never been climbed in winter. The name K2 dates back to what was called the Great Trigonometric Survey, a British survey of the geography of India carried out during the 19th century. Included in this survey were the heights of many of the Himalayan peaks, including Everest. The original surveyor, a Thomas Montgomerie, included two peaks he first called K1 and K2. He discovered later that the locals called K1 Masherbrum (the 22nd highest mountain in the world), but the remote K2 had no local name that he could find, so it was christened Mount Godwin-Austen. This name was rejected by the Royal Geographic Society although it does still appear on some maps. So, the most common name used is K2, that original notation in a surveyor’s notebook.

45 Soprano Ponselle who debuted at the Met opposite Caruso : ROSA

Rosa Ponselle was an American soprano who performed mainly with the New York Metropolitan Opera. Ponselle’s performing career started in vaudeville, but she caught the eye of the Met’s star tenor Enrico Caruso. Ponselle made her debut with the Met in 1918, singing opposite Caruso, in Verdi’s “La forza del destino”.

In bowling, a spare is recorded on a score sheet with a forward slash mark. A strike is recorded with a large letter X.

To comp is to give for free, with “comp” coming from “complimentary”.

The human ileum (plural “ilea”) is the lowest part of the small intestine, and is found below the jejunum and above the cecum of the large intestine.