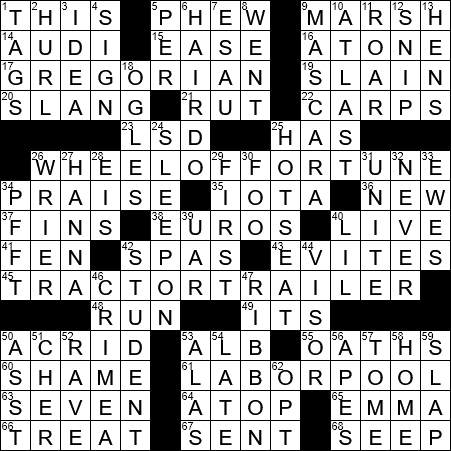 Today’s Reveal Answer: This or That

Themed answers appear to be common words and phrases at first sight, but are actually answers in the format “X OR Y”:

Dame Ngaio Marsh was a crime writer from New Zealand. Marsh is known as one of the four original “Queens of Crime”, namely: Dorothy L. Sayers, Margery Allingham, Agatha Christie, and Marsh. All her novels feature her hero, a British CID detective named Roderick Alleyn.

To expiate is to make amends for something. The term comes from the Latin verb “expiare”, which has the same meaning.

17. Should we name the kid after the eldest Brady son or the James Bond author? : GREG OR IAN (looks like “Gregorian”)

The character Greg Brady is the oldest Brady son in the sitcom “The Brady Bunch”. Greg was played by Barry Williams in the TV show. It was revealed in spin-offs of the original sitcom that Greg married a nurse and became an obstetrician.

“Cray” is a slang term meaning “insane”, and is a shortening of “crazy”.

26. Should we roll this old piano away or put it in order? : WHEEL OFF OR TUNE? (looks like “Wheel of Fortune”)

The Euro is the official currency of most of the states in the European Union, but not all. The list of EU states not using the Euro includes the UK, Denmark and Sweden.

45. Should we read a religious pamphlet or watch a movie ad? : TRACT OR TRAILER? (looks like “tractor trailer”)

Jane Austen’s novel “Emma” is the tale of Emma Woodhouse and the wonderful George Knightley. At the end of the story, Emma marries Knightley and her young friend Harriet marries Robert Martin, who had been trying to get Harriet’s attention practically from page one of the novel.

In baseball, the signs commonly used by the catcher for common pitches are:

9. It may run during a sad movie : MASCARA

10. Classic song title words before “my love has come along” : AT LAST

The 1942 song “At Last” was written for the 1941 musical film “Sun Valley Serenade” in which it is performed by Glenn Miller and his orchestra. Etta Jones recorded a version of the “At Last” in 1960, after which it became her signature song.

Something described as tonsorial pertains to a barber or to haircutting. The Latin term “tonsor” translates as “barber, shaver, shearer”.

William Hanna was an animator who is best known for his collaborations with Joseph Barbera. After creating “Tom and Jerry” for MGM, the partners founded the Hanna Barbera studio that produced such classics as “The Flintstones”, “The Huckleberry Hound Show”, “The Jetsons”, “Scooby-Doo”, “The Smurfs” and “Yogi Bear”.

“Quick Draw McGraw” was a Hanna-Barbera cartoon show starring Quick Draw the horse, a sheriff in the old West. His deputy was also an equine creature, a Mexican burro named Baba Looey. When I was a little kid, I had curtains on my bedroom window featuring Yogi Bear and Quick Draw McGraw. Happy days …

“The Guinness Book of World Records” holds some records of its own. It is the best-selling, copyrighted series of books of all time and is one of the books most often stolen from public libraries! The book was first published in 1954 by two twins, Norris and Ross McWhirter. The McWhirter twins found themselves with a smash hit, and eventually became very famous in Britain hosting a TV show based on world records.

Foo Fighters are described as an alternative rock band, one formed in 1994 by the drummer from Nirvana, Dave Grohl. The term “Foo fighters” originally applied to unidentified flying objects reported by allied airmen during WWII. Spooky …

The United Arab Republic (UAR) was a union between Egypt and Syria made in 1958 and dissolved in 1961 when Syria pulled out of the arrangement.

Crimea is a peninsula jutting out into the Black Sea that is almost completely surrounded by water. It is connected to the Ukrainian mainland to the north by the Isthmus of Perekop, and is separated from the nearby Russian region of Kuban by the narrow (less than 10 miles) Kerch Strait. Crimea has been occupied by foreign powers many times over the centuries, and now control of the region is disputed by Ukraine and Russia.

A common award for winning first place in a competition, especially at a fair, is a blue ribbon. In Canada and the UK, first place is usually recognized with a red ribbon, and blue ribbon is given for second place.

“Cher” is the stage name used by Cherilyn Sarkisian. Formerly one half of husband-wife duo Sonny & Cher, she is often referred to as the Goddess of Pop. In her acting career, Cher was nominated for the Best Supporting Actress Oscar of 1984 for her performance in “Silkwood”. She went further in 1988 and won the Best Actress Oscar for playing Loretta Castorini in “Moonstruck”.

Google’s Chrome is now the most popular web browser used in the US, with Mozilla Firefox in second place and Internet Explorer in third. I find Chrome to be much, much more user-friendly than Internet Explorer, and more featured than Firefox. Chrome also works more seamlessly with other Google products and with Android phones.