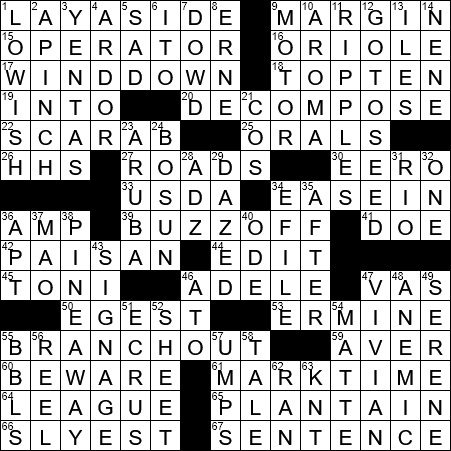 Today’s Theme (according to Bill): They Never Retire, They Just …

Themed answers are common phrases reinterpreted to represent an alternative to retirement for various professionals mentioned in the clues. And, those answers are pretty “punny”:

The Baltimore Orioles were expected by almost everyone to win the 1969 World Series. They were fielding one of their finest ever teams, and were playing the New York Mets, a team that had only been in existence for eight years. But it was the Mets who won the series, 4 games to 1, earning the team the name “Miracle Mets”.

Toni Collette is a marvelous actress from Australia who really started to garner the public’s attention playing the title role in the 1994 film “Muriel’s Wedding”. She went on to take major roles in films like “Emma” (1996), “The Sixth Sense” (1999), “About a Boy” (2002), all of which are favorites of mine. Collette also played the lead in the excellent Showtime comedy-drama “United States of Tara”.

“United States of Tara” is a comedy-drama that aired for a couple of years on Showtime. Star of the show is the talented Australian actress Toni Collette. The character she plays is Tara, a woman suffering from multiple personality disorder.

The Department of Veterans Affairs (VA) was formed in 1930 to manage pre-existing government benefits affecting war veterans, some of which had existed since the days of the Continental Congress.

A league is a unit of distance that dates back to the Middle Ages. No longer used, it was originally defined as the distance that a person could walk in an hour. In the English-speaking world, a league was equal to three miles on land, and three nautical miles at sea.

67. It may be diagrammed : SENTENCE

A sentence diagram (also “parse tree”) is a visual representation of the grammatical structure of a sentence.

The adjective “paltry” comes from an older use of “paltry” as a noun meaning a “worthless thing”.

3. They mind your own business : YENTAS

Yenta (also “Yente”) is actually a female Yiddish name. In Yiddish theater “yenta” came to mean a busybody, a gossip.

The nene is a bird that native to Hawaii, and is also known as the Hawaiian goose. The name “nene” is imitative of its call. When Captain Cook landed on the islands in 1778, there were 25,000 nene living there. By 1950, the number was reduced by hunting to just 30 birds. Conservation efforts in recent years have been somewhat successful. The nene was named State Bird of Hawaii in 1957.

The official nickname for Hawaii is “The Aloha State”. Hawaii is also referred to as “Paradise of the Pacific” and “The Islands of Aloha”.

Today is my wife’s birthday, the one-and-only love of my life … 🙂

34. System used for many returns : E-FILE

President Richard Nixon made a famous visit to China in 1972 that marked a thawing in the relationship between the United States and the People’s Republic of China (PRC). It was the first time that a US president had visited the PRC, and followed several secret diplomatic missions to Beijing by National Security Advisor Henry Kissinger. During the week-long visit, President Nixon had talks with Chairman Mao Zedong, and First Lady Pat Nixon was very visible as she toured schools, hospitals and factories.

A Horatian ode is an ode with a specific structure, one designed to resemble the odes of the Roman poet Horace.

The shade ecru is a grayish, yellowish brown. The word “ecru” comes from French and means “raw, unbleached”. “Ecru” has the same roots as our word “crude”.