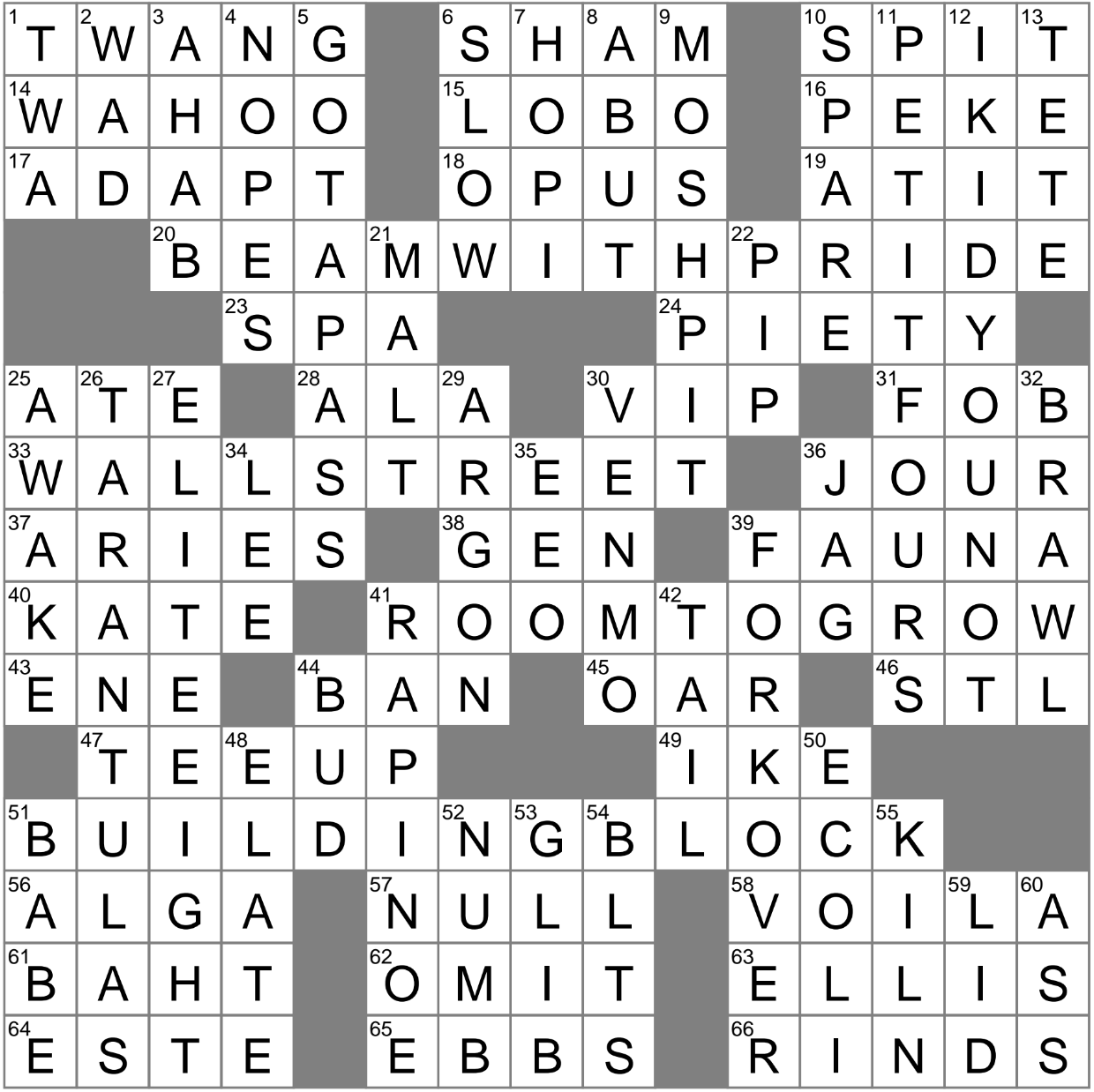 Themed answers each start with an element of construction, progressing from a BEAM to a BUILDING as we descend the grid:

Rebecca Lobo is a former WNBA basketball player who launched a second career as a sports reporter and analyst for ESPN. Lobo played with the New York Liberty, Houston Comets and Connecticut Sun.

The pekingese (“peke”) breed originated in China, as one might suspect from the name. Breeding practices have resulted in the dog having many health problems, including breathing issues related to the “desirable” flat face. Standards have been changed in recent years, demanding an “evident muzzle” in an attempt to breed healthier “pekes”.

The Latin for “work” is “opus”, with the plural being “opera”. We sometimes use the plural “opuses” in English, but people do that just to annoy me …

A dish prepared “à la king” (usually chicken or turkey), is prepared in a cream sauce with mushrooms, pimentos, green peppers and sherry.

A fob is attached to an object to make it easier to access. And so, a key fob is a chain attached to a key so that it can be retrieved easily. There are also watch fobs, and the pocket in a vest in which a watch can be placed is called a fob. In fact, the original use of the term “fob” was for a small pocket in which one could carry valuables.

“Fearless Girl” is a wonderful bronze statue by Delaware sculptor Kristen Visbal that was placed across from the New York Stock Exchange building in 2017. It depicts a young girl in a power pose, and is designed to promote female empowerment.

The French phrase “du jour” translates as “of the day”.

Definitions vary, but it seems that the term “Generation Z” is reserved for the children of “Generation X”, and for the generation that follows the “Millennials” (Generation Y). Gen-Zers are also known as “Zoomers”, a portmanteau of “Z” and “boomer” (as in “baby boomer”).

“Generation Alpha” is a term used to describe those born in the years between the mid-2010s and mid-2020s.

39 Koalas and emus, in Australia : FAUNA

The St. Louis Cardinals Major League Baseball team plays at Busch Stadium. Busch Stadium is the third stadium in the history of St. Louis to have the Busch name. The first two were named for Gussie Busch, the brewing magnate and former Cardinals team owner. The current stadium is named for the brewery though, and not Gussie per se.

“Mike and Ike” is a brand of fruit-flavored candy made by Just Born starting in 1940. Just Born launched quite a unique marketing campaign in 2012 asserting that Mike and Ike had “split up due to creative differences”. The campaign involved production of two different boxes for the candy showing one or the other name scratched out. Clever …

Proteins are synthesized in the body from amino acids, which are linked together in specific sequences that are determined by the genetic code. The language of the code is a sequence of nucleotides. The nucleotides are arranged in groups of three called “codons”, with each codon determining a specific amino acid.

The baht is the currency of Thailand. One baht is subdivided into 100 satang.

Actress Tracee Ellis Ross is perhaps best known for playing lead roles in the TV shows “Girlfriends” and “black-ish”. She was born Tracee Joy Silberstein, and is the daughter of singer Diana Ross and music executive Robert Ellis Silberstein.

The first traffic lights date back to 1868 when they were installed outside the Houses of Parliament in London. They resembled the signals already in use for trains, with semaphore arms and red and green gas lamps for nighttime use. That first system was operated manually, by a policeman at the base. Sadly, one police officer was killed just one year after the light’s installation, when the gas system exploded.

Many members of the Hopi nation live on a reservation that is actually located within the much larger Navajo reservation in Arizona.

White masks with black spots were commonly seen in the old Venetian Carnival. The masks were known as “domini”. The domini loaned their name to the game of dominoes, due to the similarity in appearance between the mask and a domino tile.

The chemical element argon has the symbol Ar. It is a noble gas, and so by definition is relatively nonreactive. The name “argon” comes from the Greek word for “lazy, inactive”. There’s a lot of argon around, as it is the third-most abundant gas in our atmosphere.

Megan Rapinoe is a professional soccer player and a star on the US national team. One of Rapinoe’s many claims to fame is that she is the only player, male or female, to score a goal directly from a corner kick in an Olympic Games.

Paul Bunyan is a character of American myth. He is a skilled lumberjack, and has a sidekick called Babe the Blue Ox. Both Bunyan and Babe are gigantic in size.