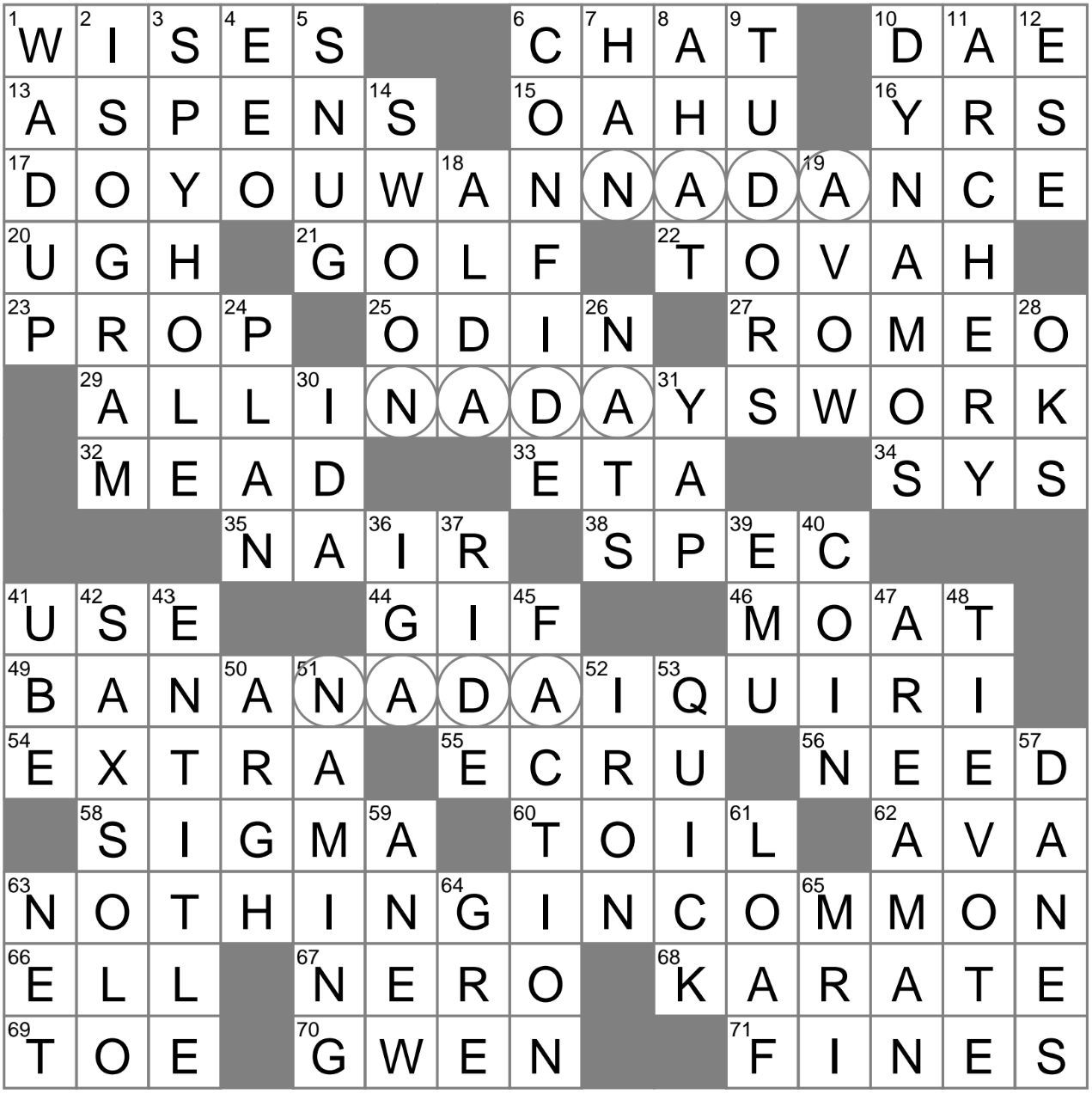 Today’s Reveal Answer: Nothing in Common

Themed answers each include “NADA”, Spanish for “NOTHING”, as a hidden word:

“Do You Wanna Dance?” was recorded by the Beach Boys in 1965. The song was originally written and recorded as “Do You Want to Dance?” by Bobby Freeman in 1958, and then successfully covered in the UK by Cliff Richards and the Shadows in 1962. However, my favorite version of the song was released by Bette Midler in 1972, a slow and sultry rendition by the Divine Miss M.

The modern game of golf originated in Scotland in the 15th century. The first written record of golf is actually a banning of the game, by King James II in 1457. King James IV was a fan of golf, and so lifted the ban in 1502. The venerated Old Course at St. Andrews dates back to 1574. The first golf club established in the US was in Yonkers, New York in 1888. That first club was also named St. Andrews.

“L’shanah tovah” is a traditional Jewish greeting meaning, “to a good year”.

We use the word “props” for objects that are used by actors on stage during a play. The term is a shortening of the older term “properties”, which was used with the same meaning up through the 19th century.

The marvelous actor Anthony Hopkins got his big break in movies playing Richard the Lionheart in the 1968 historical drama “The Lion in Winter”. Hopkins hails from the south coast of Wales, and was encouraged in his early career by fellow Welshman Richard Burton, whom he met when he was a teenager. I’d say that Hopkins’ best-known film role was Hannibal Lecter in “The Silence of the Lambs”.

A depilatory agent is something capable of removing hair. The root of the term is “pilus”, the Latin for “hair”, and the same word that gives us “pile” (as in a carpet).

Daiquirí is a small village on the coast near Santiago, Cuba and a key location in the American invasion of Cuba during the Spanish-American War. Supposedly, the cocktail called a “daiquiri” was invented by American mining engineers in a bar in nearby Santiago.

Sigma (Σ) is the eighteenth letter of the Greek alphabet, and is the one used for an “ess” sound, equivalent to our letter S. Sigma is used in mathematics to represent a summation, the adding together of a sequence of numbers.

The letter L (ell) is the opening letter in the word “letter”.

“Cobra Kai” is a TV show that premiered in 2018 that is a sequel to “The Karate Kid” series of films, the first of which was released in 1984. Actor Ralph Macchio reprises his role from the movies, playing protagonist Daniel LaRusso. William Zabka also reprises his role from the big screen, playing Johnny Lawrence, LaRusso’s rival in karate competitions. The title of the show “Cobra Kai” is the name of the karate dojo in which Johnny Lawrence trained as a youth, and which he decides to reopen 34 years later.

Gwen Ifill was a television journalist who was regularly seen on PBS’s “Newshour”. Ifill was also the moderator on the weekly PBS show “Washington Week”, and was also selected to moderate the US Vice Presidential debates in 2004 and 2008.

An isoline (sometimes “isogram”) is a line on a map that connects points of equal value, perhaps equal temperature or equal rainfall.

The Han Chinese people are the largest ethnic group in the world, and comprise 18% of the planet’s population. The 1.3 billion Han also make up 92% of China’s population. The group takes its name from the Han dynasty that ruled much of modern day China from roughly 200 BCE to 220 CE.

It is suggested that the idiomatic phrase “at the drop of a hat” comes from the Old West, where a signal to start a fight was just that, a drop of a hat.

9 Some houses with exposed-beam exteriors : TUDORS

Anyone wanting to see examples of magnificent buildings in the Tudor style of architecture might consider a visit to the English university towns of Oxford and Cambridge.

“Bridge of Spies” is a 2015 historical thriller directed by Steven Spielberg and starring his friend Tom Hanks. The story is all about the arrest and trial of U-2 pilot Gary Powers, who was shot down over the Soviet Union while on a spying mission for the CIA. Hanks plays lawyer James B. Donovan, the lawyer who negotiates Powers’ release. Powers was actually exchanged for Soviet spy Rudolf Abel, with the exchange taking place at the bridge connecting Potsdam with Berlin, the “Bridge of Spies”.

Iga Swiatek is a professional tennis player, and the first from Poland to win a major singles title (the French Open in 2020).

The 5-cent American coin known as a nickel is actually made up of 75% copper and 25% nickel. The first nickel was introduced in 1866, and was named the Shield nickel due to the shield design on the front of the coin. The current design is the Jefferson nickel, which was introduced in 1938.

41 Purple yam from the Philippines : UBE

Ube is a species of yam that is purple in color. I’m a big fan of ube ice cream. Potato-flavored ice cream; what’s not to like?!

42 Moment to shine at a jazz recital, perhaps : SAX SOLO

Area Man is a persona used by the satirical newspaper “The Onion” in articles that are written in the style of local news. Area Man is a generic individual, like Bay Area man, Dallas man, Peoria man, etc.

Our word “senate” comes from the Latin name for such a body, namely “senatus”. In turn, “senatus” is derived from “senex” meaning “old man”, reflecting the original Roman Senate’s makeup as a council of “elders”.

Claire Danes is an actress from New York City who played the title role in the HBO movie “Temple Grandin”. More recently, she has been starring as Carrie Mathison in the excellent Showtime drama series “Homeland”.

“Homeland” is a psychological drama on Showtime about a CIA officer who is convinced that a certain US Marine is a threat to the security of the United States. The show is based on a series from Israeli television called “Hatufim” (Prisoners of War”). I highly recommend it …

Pickleball is a sport invented in the 1960s, and which combines elements of tennis, table tennis and badminton. Originally marketed as a game for children to play in backyards, pickleball is now played on purpose-built courts by many, many adults, but mainly in North and South America.