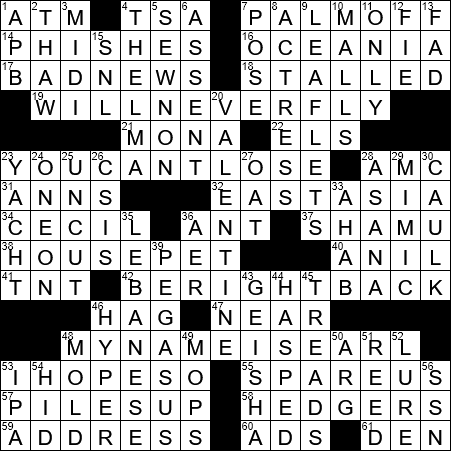 Themed answers start with words that point us towards a phrase that’s said many times on February 14th, i.e. WILL YOU BE MY VALENTINE?:

The part of the Pacific Ocean known as Oceania is roughly equivalent to the tropical islands of the South Pacific. Oceania can be divided into the regions of Polynesia, Melanesia and Micronesia.

“Halt and Catch Fire” is a TV drama set in the midst of the home computer revolution of the eighties and the explosive growth in use of the world Wide Web in the nineties. The title of the show is a computer engineering term. “Halt and Catch Fire” (HCF) is an idiomatic term describing a piece of code that causes a computer to crash, causes the central processing unit (CPU) to stop operating.

Ann Patchett is an author who lives in Nashville, Tennessee. Patchett’s most famous work is probably her novel “Bel Canto”, published in 2001. In 2012, “Time” included her in the magazine’s list of 100 most influential people in the world.
Author Ann Brashares writes fiction aimed at young adults. She is best known for her series of novels “The Sisterhood of the Traveling Pants”. The first book in that series tells the story of four young girls with differing shapes and size who find a pair of jeans that fits all four of them perfectly.

Cecil Rhodes (famous in America as the founder of the Rhodes Scholarship), was a very successful English businessman and South African politician. He founded the De Beers diamond mining company, and also founded the state of Rhodesia which was named after him. The British colony gained its independence over time in the latter half of the 20th century, and is known today as the countries of Zambia and Zimbabwe. The Rhodesian capital of Salisbury was renamed in 1982 to Harare, the current capital of Zimbabwe.

In the Marvel universe, the original Ant-Man was a scientist who used a drug to change his size, becoming small in scale while increasing his strength. The character features in “Ant-Man”, a 2015 superhero film with Paul Rudd in the title role.

Shamu was the name of the third orca (aka “killer whale”) ever to be featured in a public exhibition. Shamu starred in a popular SeaWorld show in San Diego in the sixties. After she died in 1971, her name lived on as the name “Shamu” is still used by SeaWorld for its killer whale shows. That original Shamu was retired after she grabbed and refused to let go of the leg of one of her trainers.
SeaWorld was started in San Diego in 1964. The original plan was build an underwater restaurant with a marine life show. Eventually the founders dropped the idea of the eating establishment and just went with a theme park. SeaWorld has been mired in controversy since the 2013 release of the documentary “Blackfish”, which tells of the involvement of a particular orca (killer whale) in the death of two SeaWorld employees and one SeaWorld visitor.

“Anil” is another name for the indigo plant, as well as the name for the blue indigo dye that is obtained from it. The color of anil is relatively close to navy blue. The main coloring agent in indigo dye is a crystalline powder called indigotin.

“My Name Is Earl” is a sitcom that ran from 2005 to 2009 starring Jason Lee as title character Earl Hickey. Hickey is a penny-ante thief who discovers the concept of karma when he is hit by a car, causing him to lose a $100,000-winning lottery ticket.

If you’d allow me to be selfish in my comments for a second, why don’t we use the suffix “-ize” for the word “advertise”? I spent years after arriving in America training myself to use “-ize” instead of “-ise”, and then tripped over “advertise” so many, many times …

“Thelma & Louise” is a thought-provoking movie, and one that is very entertaining. It was directed by Ridley Scott in 1991, and stars two fabulous leads in Geena Davis and Susan Sarandon. You’ll also spot Brad Pitt onscreen in his first significant movie role.
As well as being a successful Hollywood actress, Geena Davis is an accomplished archer and came close to qualifying for the US archery team for the 2000 Summer Olympics. Davis is also a member of American Mensa. She is quite the lady …

“God Only Knows” is a 1966 hit song recorded by the Beach Boys. It raised a few eyebrows back then, no one had really ever used the word “God” in a pop song title.

A fidget spinner is toy that supposedly can be used for stress relief. Sales of fidget spinners really took off in 2017, although versions of the toy existed back in the early nineties.

15. Kate McKinnon is in its ensemble, briefly : SNL

The “CSI” franchise of TV shows has been tremendously successful, but seems to have finally wound down. “CSI: Miami” (the “worst” of the franchise, I think) was cancelled in 2012 after ten seasons. “CSI: NY” (the “best” of the franchise) was cancelled in 2013 after nine seasons. The original “CSI: Crime Scene Investigation”, set in Las Vegas, hung in there until 2015 when it ended with a two-hour TV movie. The youngest show in the series was “CSI: Cyber”. It lasted for two seasons, before being canceled in 2016.

The term “caulk” comes from old Norman French “cauquer”, and described the action of filling gaps with lime. “Caulk” has the same root as our word “chalk”.

Beirut is the capital city of Lebanon. After WWI, Lebanon was placed under administrative control of the French and Beirut flourished as a financial center in the Middle East and as a major world tourist destination. The city was devastated in the Lebanese Civil War that raged from 1975 to 1990, but reconstruction has restored the city to much of its former glory, making it a major cultural center once again.

43. Performer with many fans? : GEISHA

The “hasp” of a lock might refer to more than one thing. The u-shape loop protruding from a padlock is often called a “lock hasp”, for example.

A retread tire is one that has been recycled, possibly more than once. The tread of the old tire is buffed away, and and new rubber tread is applied to the “bare” tire using some special process that seems to work really well (except for truck tires, in my humble opinion!). Retreads are a lot cheaper, and obviously are relatively friendly to the environment.

Argentina is the second largest country in South America (after Brazil), and geographically is the world’s largest Spanish-speaking nation. The name “Argentina” comes from the Latin “argentum”, the word for “silver”. It is thought that the name was given by the early Spanish and Portuguese conquerors who also named the Rio de la Plata (the “Silver River”). Those early explorers got hold of lots of silver objects that they found among the native population.
The official name of Uruguay is the Oriental Republic of Uruguay, which reflects the nation’s location on the eastern coast of South America. It is a relatively small country, the second-smallest on the continent, after Suriname. In 2009, Uruguay became the first country in the world to provide a free laptop and Internet access to every child. Now there’s a thought …