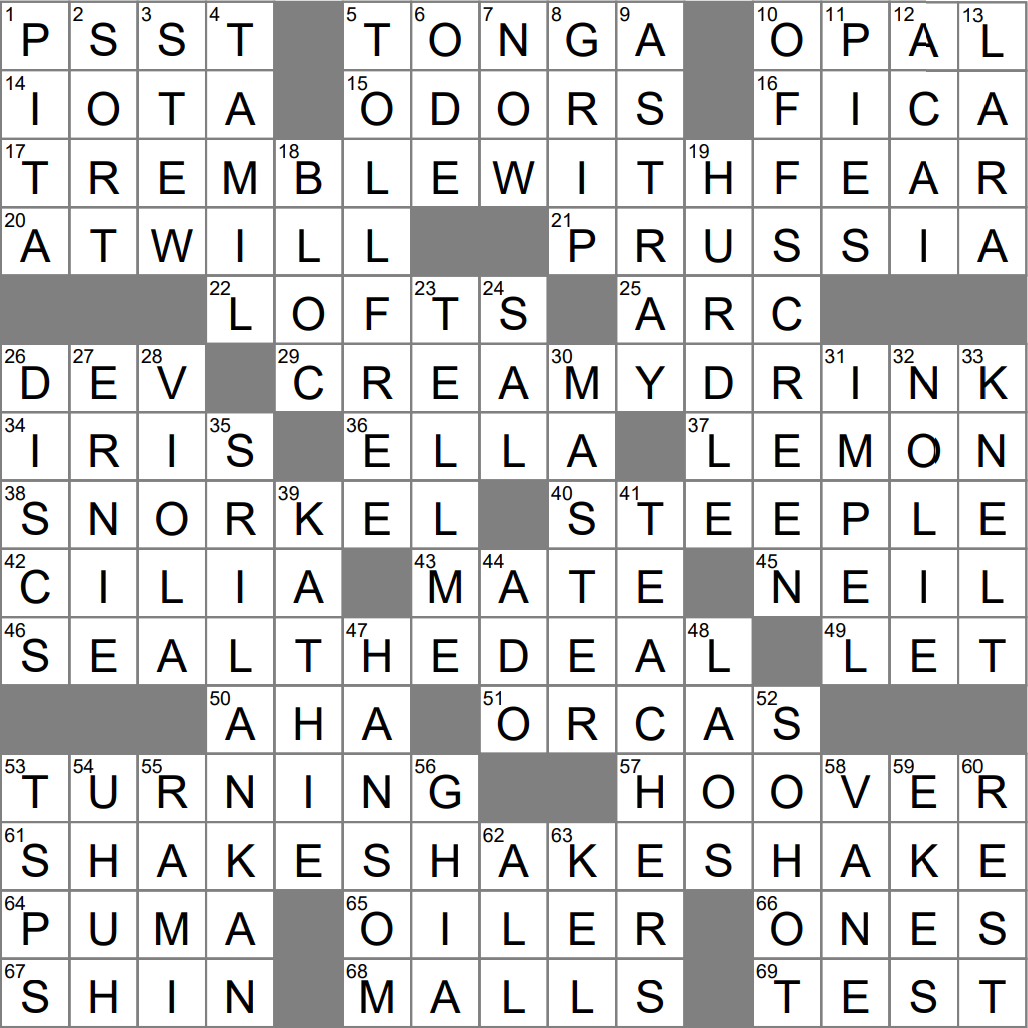 Themed answers are each synonyms of “SHAKE”:

The brilliant film “Slumdog Millionaire” is a screen adaptation of a 2005 novel by Indian author Vikas Swarup. A low-budget movie, it ended up winning eight Oscars in 2008. I reckon it turned a profit …

Neil Gaiman is an English author whose works include novels, comic books and graphic novels. He has a very noteworthy friendship with musician Tori Amos. Amos has included “Neil” in the lyrics of several of her songs. In turn, Gaiman included her as a character in his comic book “The Sandman”, and Amos penned the introduction to the comic “Death: The HIgh Cost of Living”, and features on the cover.

KC and the Sunshine Band were founded as a disco band in Florida in 1973. The band was founded by the lead singer Harry Wayne Casey, who also lent his nickname (KC … “Casey”) to the group’s name. Their biggest hits were all released in the 1970s: “Get Down Tonight”, “That’s the Way (I Like It)”, “(Shake, Shake, Shake) Shake Your Booty”, “I’m Your Boogie Man” and “Please Don’t Go”.

The Suez Canal connects the Mediterranean Sea with the Red Sea. It took ten years to construct, and opened in 1869. The northern terminus of the waterway is Port Said, and the southern is Port Tewfik in the city of Suez, which gives the canal its name.

1 Bread with a pocket : PITA

Tamils are a large ethnic group of almost 80 million people who speak Tamil as their mother tongue. Despite the large Tamil population, there is no Tamil state. The highest concentration of Tamils is in Sri Lanka, where they make up about 25% of the population.

The nation’s first infomercial was aired in 1950. The product advertised was a Vitamix blender.

“Lara Croft: Tomb Raider” is a 2001 action movie that is a spinoff of the very successful video game series “Tomb Raider”. Angelina Jolie plays the title character. I really wanted to enjoy this film, but that didn’t happen …

Back in the 1700s there was a race called a “steeplehunt”, a horse race from a fixed location to some church in the distance which had a steeple visible. This evolved into the race that we know today as a “steeplechase”.

Sal Paolantonio is a reporter for ESPN who is based in Philadelphia. He is mostly associated with coverage of the Philadelphia Eagles, New York Giants and the New York Jets.

Colombo is the largest city in Sri Lanka. It is also the commercial capital of the island nation, whereas the administrative capital is Kotte (or more formally “Sri Jayawardenepura Kotte). Kotte is in fact a suburb of Colombo.

Volkswagen made the Karmann Ghia sports car from 1955 to 1974. The original model was built on the VW Beetle chassis, was styled by the Italian automobile design house Ghia, and the bodywork was hand-built by the German coach-builder Karmann.