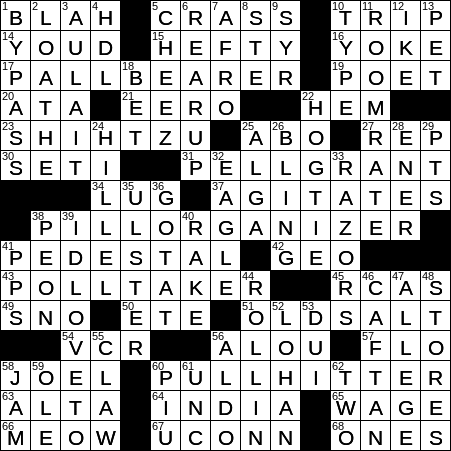 Today’s Theme (according to Bill): Pall to Pull

Themed answers start with PxLL, where “x” is a vowel progression as we drop through the grid:

Hefty is a brand of trash bags and related products.

A pall is a cloth used to cover a casket at a funeral. Pallbearers actually carry the coffin, covered by the pall. The phrase “casting a pall over”, meaning to create a dark mood, is metaphorical use of the pall over the casket.

Eero Saarinen was a Finnish-American architect who was renowned in this country for his unique designs for public buildings such as Gateway Arch in St. Louis, Dulles International Airport Terminal, and the TWA building at JFK. The list of his lesser-known, but still impressive, works includes several buildings erected on academic campuses. For example, the Chapel and Kresge Auditorium on the MIT campus, the Emma Hartman Noyes House at Vassar College, the Law School building at the University of Chicago, and Yale’s David S. Ingalls Rink.

Pell Grants are awarded by the federal government to students in financial need so that they can attend college. The grant is named for Claiborne Pell, the US senator who sponsored the bill that introduced aid for students.

42 Prefix with graphic or centric : GEO-

Felipe Alou is a former professional baseball player and manager. Alou managed the Montreal Expos from 1992 to 2001, and the San Francisco Giants from 2003 to 2006. Alou was born and raised in the Dominican Republic and came to the US to play for the Giants in 1955. Felipe’s brothers Matty and Jesús followed him to the US, and into Major League baseball.

Progressive is a popular auto insurance company, the one that uses the perky character named “Flo” as a spokeswoman. Flo is played by comedian and actress Stephanie Courtney.

“Piano Man” is a great 1973 song released by Billy Joel, his first ever single. The song reflects Joel’s own experiences working a piano-lounge singer in a Los Angeles bar called the Executive Room. The lyrics mention a “waitress practicing politics”, which is a reference to Elizabeth Weber who worked at the Executive Room and was Joel’s first wife.

60 One whose batted balls rarely go to the opposite field, in baseball lingo : PULL HITTER

64 Where to find Delhi sandwiches : INDIA

The University of Connecticut (UConn) was founded in 1881 as the Storrs Agricultural School, taking its name from the Storrs brothers who donated the land and provided initial funding. The school is in the village of Storrs, Connecticut located about 25 miles east of Hartford.

“Café au lait” (coffee with milk) is usually strong drip coffee to which one adds steamed milk. Well, that’s the way we tend to make in this country.

Damascus is the second largest city in Syria (after Aleppo), and is the country’s capital. Damascus has the distinction of being the oldest, continuously-inhabited city in the world, having been settled in the 2nd millennium BC. Also, it has the nickname “City of Jasmine”.

Hillel the Elder was an important Jewish religious leader and scholar who lived in the first century BCE. Two popular sayings are attributed to Hillel:

Bling-bling (often simply “bling”) is the name given to all the shiny stuff sported by rap stars in particular i.e. the jewelry, watches, metallic cell phones, even gold caps on the teeth. The term comes from the supposed “bling” sound caused by light striking a shiny metal surface.

A kaftan (also “caftan”) is long robe associated for thousands of years with Islamic cultures.

“Più” is the Italian word for “more” and is often seen on musical scores, as in “più allegro” (more quickly) and “più mosso” (with more movement).

Because, three’s a crowd.