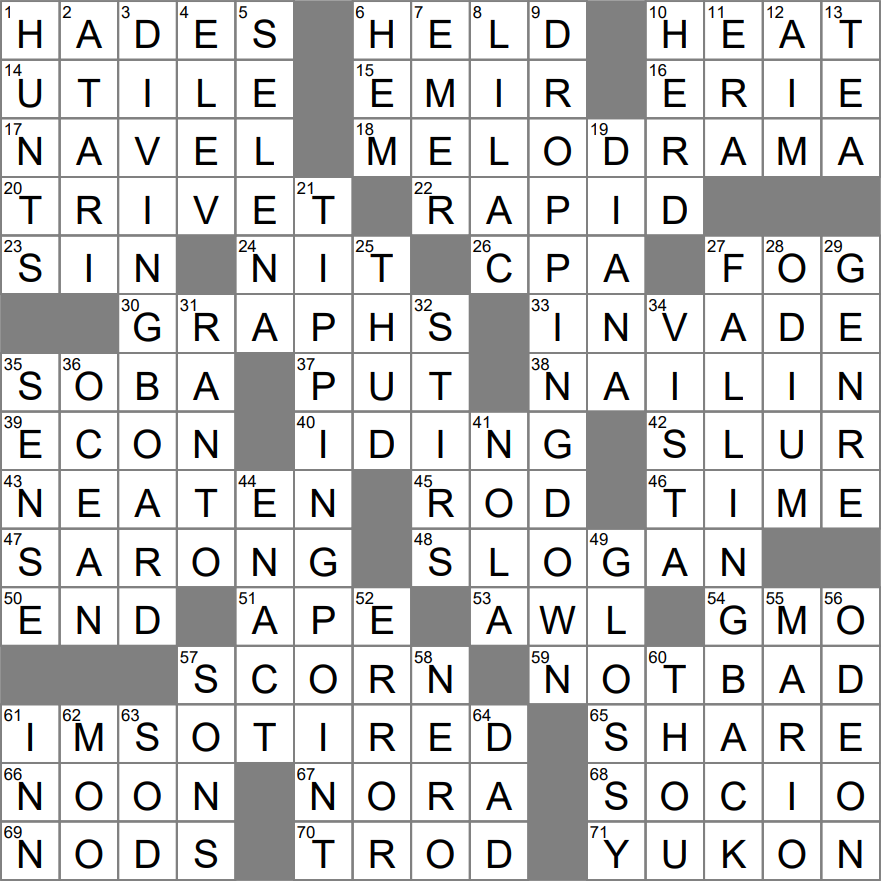 Today’s Theme (according to Bill): Declined to Solve This One

Themed answers are all common two-word phrases in the down-direction. Each starts with a synonym of “descending”, and is reinterpreted in the clue:

1 Realm surrounded by the Styx : HADES

Erie is a port city in the very north of Pennsylvania, sitting on the southern shore of Lake Erie. The city takes its name from the Erie Native American tribe that resided in the area. Erie is nicknamed the Gem City, a reference to the “sparkling” water of Lake Erie.

The navel is essentially the scar left behind when the umbilical cord is removed from a newborn baby. One interesting use of the umbilicus (navel, belly button) is to differentiate between identical twins, especially when they are very young.

A trivet is an item placed under a hot serving bowl to protect the surface of a dining table. The term “trivet” is also used for a tripod supporting pots over an open fire. “Trivet” comes from the Latin “tripes” meaning “tripod”.

A graph is a diagram that represents how one variable changes when compared with another (or more than one other). The same diagram was known as a graphic formula prior to the 1870s, when “graph” emerged as an abbreviation of “graphic formula”.

40 Choosing from a lineup : ID’ING

“Sarong” is the Malay word for “sheath”. The term originally described a garment worn by Malay men and women around their waists. The Malay sarong is actually a tube of fabric, about a yard wide and two-and-a-half yards long. Many variations of the sarong are worn all over South Asia and the Pacific Islands. I had occasion to wear one in Hawaii many years ago, and found it very … freeing!

“Ya Gotta Believe” is a phrase associated with the New York Mets baseball team. It was popularized in 1973 by pitcher Tug McGraw, after the Mets had a poor season but miraculously made it to that season’s World Series (although they eventually lost to the Oakland As).

To show disdain towards something is to look on it with scorn. The verb “disdain” comes from the Old French “des-” (do the opposite of) and “deignier” (treat as worthy).

I remember being quite addicted to the Atari video arcade game called Asteroids back in the early eighties. Apparently I wasn’t the only one, as Asteroids was Atari’s best selling game of all time.

5 Gomez of “Only Murders in the Building” : SELENA

Selena Gomez is an actress and singer from Grand Prairie, Texas. Gomez’s first television role was in the children’s show “Barney & Friends”. She then played the lead in the TV series “Wizards of Waverly Place”. Gomez’s fans often refer to themselves as “Selenators”. Offscreen, Gomez made a splash as the girlfriend of Canadian singer Justin Bieber for a couple of years.

Amethyst is a form of quartz that is purple in color. There was a belief that the stone protected the owner from drunkenness, which is how amethyst got its name. The Ancient Greek “ἀméthystos” means “not intoxicated”. I’m not into jewelry, but maybe I should get some amethyst [hic!] …

9 Feathers during a no-holds-barred pillow fight? : DROPPING DOWN

Down feathers are the very fine feathers found under the tougher exterior feathers of a bird. There is fossil evidence that some non-avian dinosaurs had down-like feathers.

Odium is a strong dislike or aversion. The term “odium” is Latin in origin and relates to the Latin word “odi” meaning “I hate”.

“Bromance” is a name given these days to a close relationship between two straight males.

36 Setting for much of “Aquaman” : OCEAN

Aquaman is a comic book superhero who first appeared in 1941. He was inspired by a character in a Russian science-fiction novel named “Amphibian Man”.

Mario Lemieux is a retired Canadian NHL player. He played his whole professional career with the Pittsburgh Penguins, from 184 to 2006, and in 1999 took over ownership of the team.

Mumford & Sons is a folk rock band formed by Marcus Mumford in 2007 in London. My guess is that the group’s most famous song is the excellent “I Will Wait”, written by Mumford and released in 2012.