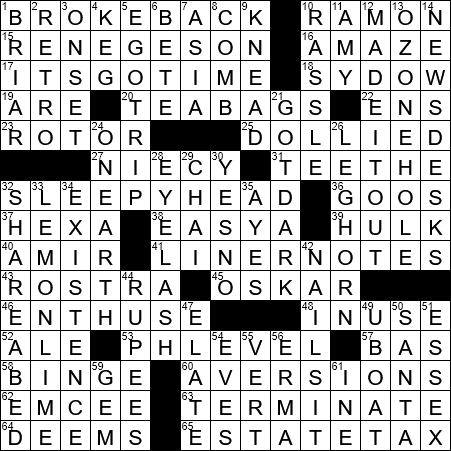 “Brokeback Mountain” is a 2005 movie about the romantic and sexual relationship between two cowboys, played by Heath Ledger and Jake Gyllenhaal. Matt Damon was asked to play one of the leads but declined. Damon gave the excuse, “I did a gay movie (The Talented Mr. Ripley), then a cowboy movie (All the Pretty Horses). I can’t follow it up with a gay-cowboy movie!”

Martin Sheen is the stage name of actor Ramón Estévez. Despite all of his great performances, Sheen has never even been nominated for an Academy Award. Isn’t that something? I thought he was outstanding in his starring role in television’s “The West Wing”.

Max von Sydow is a Swedish actor who is noted for his appearances in movies filmed in several European languages. He has appeared in movie with dialogs in English, Norwegian, Danish and Spanish.

22 Rank aboard the Enterprise: Abbr. : ENS

The USS Enterprise is a starship in the “Star Trek” universe (pun!). There have been several generations of starship with the name Enterprise, starting with the vessel numbered NCC-1701, which appeared in the original TV series. My favorite “Star Trek” series is “Next Generation”, which features USS Enterprise NCC-1701-D.

A turbine is a machine uses the flow of a fluid (sometimes air) to create rotational work. Simple examples of turbines are windmills and waterwheels.

25 Moved, as a movie camera : DOLLIED

A dolly is a small platform on rollers, especially on a movie set. Apparently, it is so called because it’s supposed to look like a doll. No, it doesn’t. I don’t believe it …

Niecy Nash is a comedian and actress who played Deputy Raineesha Williams in the comedy show “Reno 911!” Nash is one of the celebrities to have participated in the reality competition “Dancing with the Stars”, taking fifth place in the tenth season.

“Claws” is a comedy-drama show that first aired in 2017. It’s all about a group of five manicurists who branch out into organized crime.

Amir Khan is an English boxer who is a former light-welterweight world champion. Prior to turning professional, Khan won a silver medal for boxing in the 2004 Olympics in Athens. He was only 17 years old at the time.

45 Role for which Liam got an Oscar nod : OSKAR

Irish actor Liam Neeson got his big break when he played Oskar Schindler in the Spielberg epic, “Schindler’s List”. Neeson was in the news some years ago when he lost his wife, actress Natasha Richardson, in a tragic skiing accident in 2009.

I’m a big fan of binge-watching, the practice of watching perhaps two or three (even four!) episodes of a show in a row. My wife and I will often deliberately avoid watching a recommended show live, and instead wait until the whole series has been released on DVD or online. I’m not a big fan of “tune in next week …”

65 Duty for the bereaved : ESTATE TAX

To be bereaved (also “bereft”) is to have suffered the loss of a loved one.

“Bête noire” translates from French as “black beast”, and is used in English to describe something or someone that is disliked.

An eye rhyme is a similarity in spelling between two words that look like they should rhyme, but are actually pronounced differently. So, for example, wood “looks like” food, but the words sound quite different. Eye rhymes are sometimes found in older poems. Because the pronunciation of words has changed over time, an intended rhyme may not exist today.

Foghorn Leghorn is a lovable rooster who appears in “Looney Tunes” and “Merrie Melodies” cartoons from the forties through the sixties. Foghorn’s marvelous voice was provided by the great Mel Blanc. The rooster’s demeanor was drawn directly from a character called Senator Beauregard Claghorn, a blustery Southern politician who appeared regularly on radio’s “The Fred Allen Show”.

34 “The only way to deal with an unfree world is to become so absolutely free that your very __ is an act of rebellion”: Camus (attributed) : EXISTENCE

Albert Camus was a French author, and winner of the Nobel Prize for Literature in 1957. Sadly, Camus died in a car accident just two years after he received the prize, at only 46 years of age.

There are five counties named Essex in the US:

“Lil Uzi Vert” is the stage name of rapper Symere Woods from Philadelphia.

Erma Franklin was an R&B and gospel singer. She was the elder sister of Aretha Franklin. Erma toured with Aretha for a while, and even recorded backup vocals on her sister’s big hit “Respect”.