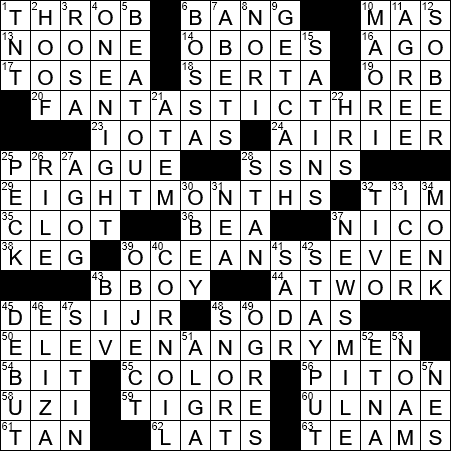 Happy Thanksgiving, everyone. Themed answers are movie titles that include a number, but that number has been reduced by 1:

13 Peter of Herman’s Hermits : NOONE

Peter Noone is a great personality in the entertainment world, most famous as the “Herman” in the sixties group Herman’s Hermits. Noone was only 15-years-old when he started as lead singer with the band.

When the members of a full orchestra tune their instruments, they almost always tune to an “A” played by an oboe. A wind ensemble usually tunes to a B-flat, as this is an “open” note on many instruments, one in which all valves are open on trumpet for example, or the slider on a trombone is in home position.

“Fantastic Four” (also “FANT4STIC”) is a 2015 reboot of the “Fantastic Four” franchise of films. This one failed miserably at the box office, and was a big winner at the that season’s Golden Raspberry Awards.

Tim Robbins is a Hollywood actor, director and producer. I’d say that Robbins’ best-known roles are the leads in “The Shawshank Redemption” and “The Player”. Robbins also wrote, produced and directed the 1995 movie “Dead Man Walking” starring Susan Sarandon and Sean Penn. Robbins was married for almost thirty years to Susan Sarandon, although they split up in 2009.

Nico was the stage name of a German singer born Christa Päffgen. Nico was one of Andy Warhol’s superstars, a group of personalities that gathered around him and whom he promoted in the sixties and seventies. It was Warhol who introduced Nico to the Velvet Underground, the New York City band that Warhol was managing at the time.

The Velvet Underground was an influential New York City rock band active in the late sixties and early seventies. The group was formed by Lou Reed and John Cale, and was managed by pop artist Andy Warhol.

A “b-boy” is a male fan of rap-music and breakdancing. Apparently the term comes from either “Bronx boy” or “break boy”.

The powerful 1957 movie “12 Angry Men” was directed by Sidney Lumet, and has a stellar cast of “jury members” including Henry Fonda, Lee J. Cobb, Jack Klugman and Ed Begley. If ever there is a movie that clearly was based on a play, it’s this one. Practically the whole film takes place on one set, the jury room.

The reindeer species of deer is also known as the caribou in North America.

Thelonious Monk was a jazz pianist and composer, actually the second-most recorded jazz composer after the great Duke Ellington. That’s a pretty impressive statistic given that Ellington wrote more than 1,000 songs, whereas Monk only wrote about 70. Monk was a pioneer in the development of the jazz style called “bebop”, which gained popularity in the 1940s.

Mazola is a brand of corn oil now owned by Associated British Foods.

43 End of the rainbow mnemonic : BIV

Faith Lehane is one of the Vampire slayers on the show “Buffy the Vampire Slayer”. She is played by actress Eliza Dushku. Dushku was a minor when she joined the show, and had to go through the legal process of emancipation in order to put in the long hours required in production. The 17-year-old went through that process in order to sidestep child labor laws.

52 One of Italy’s trio of active volcanoes : ETNA