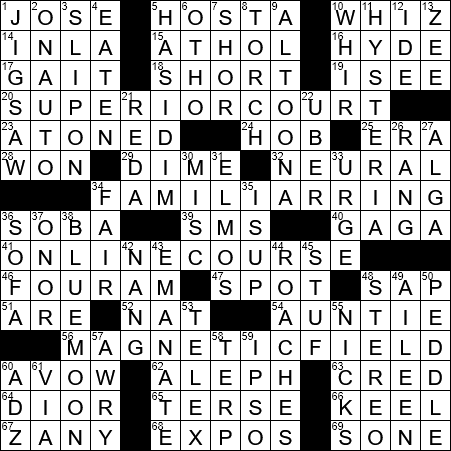 Today’s Theme (according to Bill): Change of Venue

Themed answers are common phrases that have been reinterpreted to describe varying sports venues:

Playwright Athol Fugard was born in South Africa. Fugard wrote plays that opposed apartheid, many of which had to be produced outside of South Africa given the political climate at home. Fugard now lives in San Diego, California.

A hob is the cooking surface on a stove. The term “hob” originally applied to a shelf at the back or side of a fireplace that was used for keeping food warm.

It used to be that “neural network” was just the name given to a network nerve cells in an organism. In the modern world, the term “neural net” (short for “neural network”) also applies to virtual or electronic devices designed to mimic the function of the human brain, and in particular learning from past experiences.

Soba is a thin Japanese noodle made from buckwheat flour. In Japan, the word “soba” tends to be used to describe any thin noodle, in contrast with the thicker noodles that are called udon.

The Washington Nationals (“Nats”) baseball team started out life as the Montreal Expos in 1969, and were the first Major League Baseball team in Canada. The Expos moved to Washington in 2005 becoming the Nats. There are only two Major Leagues teams that have never played in a World Series, one being the Mariners and the other the Nats.

62. Starting word containing five of the letters of what it starts : ALEPH

“Aleph” is the first letter of the Hebrew “alphabet”.

Christian Dior was a French fashion designer. As WWII approached, Dior was called up by the French military, drawing a temporary halt to his career in fashion. He left the army in 1942 and for the duration of the war designed clothes for wives of Nazi officers and French collaborators. After the war his designs became so popular that he helped re-establish Paris as the fashion center of the world.

In the world of acoustics, the sone was introduced in 1936 as a unit of perceived loudness.

1. Something to put together : JIGSAW

The Hasidic Jewish movement was founded in the 18th century by Baal Shem Tov, a mystical rabbi from Eastern Europe.

AD 69 was a year of civil war in ancient Rome. The unrest started with the death of emperor Nero in AD 68, after which followed the brief rule of Galba, of Otho, of Vitellius, and of Vespasian all in the same year. As a result, AD 69 became known as the Year of the Four Emperors.

7. Toots in a restaurant : SHOR

Toots Shor ran his Toots Shor’s Restaurant in Manhattan during the forties and fifties. The establishment served relatively plain American cuisine, but it was a celebrated hangout for the New York elite. Shor’s personality brought in the rich and famous, like Jackie Gleason, Charlie Chaplin, Chief Justice Earl Warren and Louis B. Mayer.

Visitors to New York City’s Liberty Island can enter the statue’s base and pedestal. At most, 240 visitors per day are allowed to climb two spiral staircases giving access to the observation point in the statue’s crown. There is also an observation platform surrounding the torch, but public access has been denied for safety reasons since 1916.

There is a letter Z (zee) in the middle of the word “Venezuela”.

22. Means of getting around town : UBER

Double Stuf Oreo was introduced in 1975, and has twice the normal amount of white cream filling as the original cookie.

Aileen Quinn is an actress from Yardley, Pennsylvania. Quinn was only 12 years old when she was given the title role in John Huston’s 1982 film adaptation of “Annie”.

Telex grew out of the world of the telegraph. What Telex brought to telegraphy was the ability to route messages. Instead of having to talk to an operator to route a particular message to the intended party, the user of a telex could route the message directly to another telex machine by way of a rotary dial, one very similar to that on a telephone.