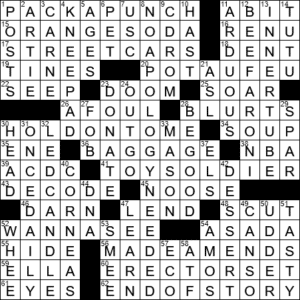 A tram is a means of public transportation that runs on rails laid along the length of streets in cities and towns. Trams might also be referred to as trolleys or streetcars.

The Raptors are the NBA basketball team based in Toronto, Ontario. The franchise was founded, along with the Vancouver Grizzlies, when the NBA expanded into Canada in 1995. However, the Grizzlies moved to Memphis in 2001, leaving the Raptors as the only Canadian member of the league. The selection of the name “Raptors” in 1995 was strongly influenced by the popularity of the movie “Jurassic Park in the mid-nineties.

The Heavy Metal band known as AC/DC was formed by two brothers Malcolm and Angus Young in Australia in 1973. The group is usually called “Acca Dacca” down under.

Tchaikovsky’s “The Nutcracker” is one of the most popular ballets in the repertoire. It premiered in St. Petersburg in 1892, but its public appeal really only emerged in the late 1960s. It’s “must-see ballet” during the Christmas holidays.

“Scut work” is monotonous work, tasks that need to be done in order to complete a larger project. “Scut” is an informal term that describes a contemptible person.

Oh how I loved my Erector Set as a kid. The version we used growing up was referred to as a Meccano set, as “Meccano” was the brand name used for the toy sold as “Mechanics Made Easy”. The original Erector Set was developed by inventor Alfred Carlton Gilbert, and first produced in 1913. Back then it was sold as “The Erector/Structural Steel and Electro-Mechanical Builder”.

“The Man Who Saved Christmas” is a movie inspired by the true story of toymaker Alfred Carlton Gilbert. Gilbert had agreed to retool his factory during WWI to produce goods that supported the war effort. He became uncomfortable with the government’s urging people to forgo Christmas in order to conserve essential resources. Gilbert successfully lobbied the government to allow manufacturers to produce toys for the holiday season, earning him the moniker “The man who saved Christmas”. In the film, Gilbert is portrayed by Jason Alexander.

The University of Southern California (USC) is a private school in Los Angeles. Apart from its excellent academic record, USC is known for the success of its athletic program. USC Trojans have won more Olympic medals than the students of any other university in the world. The USC marching band is very famous as well, and is known as the “Spirit of Troy”. The band has performed with many celebrities, and is the only college band to have two platinum records.

44 Bad thing to leave at a crime scene : DNA