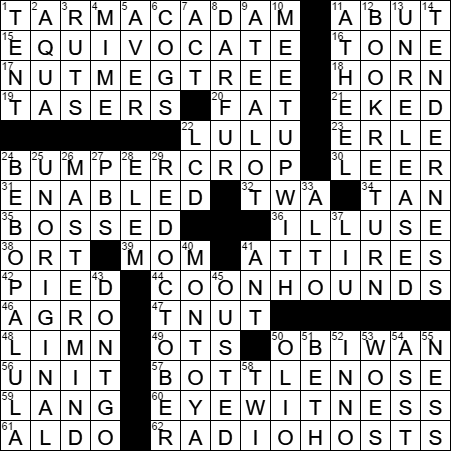 19. What suspects may be charged with : TASERS

Pan American World Airways (usually just “Pan Am”) started out as a mail and passenger service between Key West, Florida and Havana, Cuba in 1927. From very early in the company’s life it was the de facto representative air carrier of the United States. For many years Pan Am’s fleet was built around the Boeing 314 Clipper, a long-range flying boat that was one of the largest aircraft around at the time. Pan Am adopted the Clipper as part of its image, even using “clipper” as the call sign for its flights.

Coonhounds are American hunting dogs. The breed was originally developed for hunting raccoons, hence the name.

“To limn” is to describe, or portray in a painting or a drawing. “Limn” has the same root as “illuminate”, in the sense of illuminating a manuscript.

A hand is a 4-inch unit of measure used primarily for giving the height of a horse. The original “hand” was the width of the hand, held without splaying the thumb or fingers. The height of a horse is measure from the ground to the withers, the ridge between the shoulder blades.

k.d. lang is the stage name of Kathryn Dawn Lang, a Canadian singer and songwriter. Beyond her performing career, lang is a noted activist focused on animal rights, gay rights, and human rights in Tibet.

Aldo Rossi was an architect from Milan, Italy, where much of his work can be seen.

In response to a 2003 rebellion in the Darfur region of Sudan, the Sudanese government embarked on a campaign of ethnic cleansing against the non-Arab population in the region. Hundreds of thousands of civilian deaths ensued, and eventually Sudan’s president Omar al-Bashir was indicted for crimes against humanity by the International Criminal Court. al Bashir is still in office.

“Be-Bop-A-Lula” is an early rock and roll song, recorded in 1956 by Gene Vincent and His Blue Caps. The unusual name is probably related to the song “Be-Baba-Leba” recorded just over ten years earlier, in 1945 by Helen Humes. Both these titles derive from a similar sounding phrase common in jazz circles in the forties, which gave the name to the “bebop” style of music. And the original jazz term “bebop” probably came from “Arriba! Arriba!”, words of encouragement from Latin American bandleaders to their musicians.

Mastermind is a code breaking game that uses colored pegs on decoding board. The “codemaker” sets a hidden “code” of four colored pegs into one end of the board, and then the “codebreaker” guesses the sequence of colors by laying four pegs into the decoding section of the same board. The codemaker responds by revealing how many pegs are guessed correctly and in the right position, and how many are guessed correctly and in the wrong position. The codebreaker uses this information to break the code within a specified number of guesses.

Children’s programming on the Public Broadcasting Service has gone by the name “PBS Kids” since 1994.

“Am” is the symbol for the element Americium. Americium was first produced during WWII at the University of California in Berkeley. The discovery was related to the Manhattan Project and so was kept secret from the public until after the war.

“Fm” is the symbol for the element Fermium. Fermium was discovered as a result of the first hydrogen bomb explosion, in 1952. It is named for Enrico Fermi, a leading Italian nuclear physicist of the day. Fermium is the element with the atomic number of 100.

“The Hunt for Red October” was the first novel published by Tom Clancy, and one of his best in my humble opinion. The story is centered on the defection of the captain of a top-secret Soviet submarine, who attempts to surrender his vessel to the Americans without the knowledge of his crew. The gripping storyline is actually inspired by real events, the failed mutiny on board the Soviet submarine Storozhevoy in 1975. Unusually, the novel was published by the United States Naval Institute, marking the first time it had ever published a fictional work. To this day, “The Hunt for Red October” is the Institutes’s most successful title.

Carlos Montoya was a renowned flamenco guitarist from Madrid, Spain. Montoya brought his music to much of the world while touring during the 1920s and 1930s. He was touring America when WWII broke out in Europe, an event that led to his settling in the US.

A “ness” is a headland or promontory. The term comes from Old Norse and has the same roots as our word “nose”.

“Twilight” is the light experienced when the sun is below the horizon, both in the morning and the evening. The prefix “twi-” seems to come from the sense of “half”, and in “half light”. There appears to be no connection to the word “twice”, despite twilight occurring twice each day.

19. What suspects may be charged with : TASERS

60. Police may look for one : EYEWITNESS

13. Not yet on the shelves : UNRELEASED