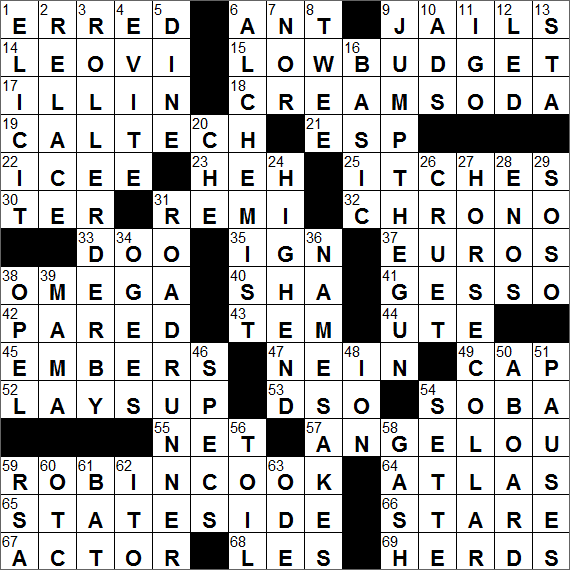 Each of today’s themed answers begins with a word that often follows HIGH:

Pope Leo VI was in office for just 9 months, spanning the years 928 and 929. Leo VI apparently wasn’t his own man, and fell under the control of a wealthy Roman noblewoman called Marozia. Marozia had allegedly been the mistress of Pope Sergius III, had ordered the imprisonment and death of Pope John X, then making Leo VI head of the Roman Catholic church.

Run-D.M.C. was a hip hop group from Queens, New York. The trio took its name from two of the group’s members: Joseph “Run” Simmons and Darryl “D.M.C.” McDaniels.

Dr. Brown’s is a soda brand that’s big in and around New York City. The original formulation first went on the market in 1869, and was primarily sold in Jewish neighborhoods. Dr. Brown’s had a kosher certification long before Coca-Cola achieved the same status in the 1930s.

Calamine is mainly zinc oxide, with a small percentage of iron oxide. Calamine is incorporated into a lotion that is used for many things, including treatment of sunburn and itching.

“Ter” is the Latin word for “three”, commonly used in the medical world on prescriptions as part of the expression “ter in die”. “Ter in die” is Latin for “three times a day”, abbreviated to “TID”. “Bis in die” (BID) would be twice a day, and “quater in die” (QID) would be four times a day.

The “eurozone” or “euro area” is a monetary and economic union within the European Union that uses the euro as a shared legal tender and sole currency.

The manually wound Omega Speedmaster was the first watch worn by an astronaut on the surface of the moon. Neil Armstrong left his Speedmaster inside the Lunar Module, but Buzz Aldrin wore his.

Do you remember the band “Johnny Casino & The Gamblers” in the movie “Grease”? That was actually the real-world group Sha Na Na. Johnny Casino & the Gamblers sang “Those Magic Changes” at the high school dance, in between “Rock’N Roll Is Here to Stay” and “Hound Dog”. Sha Na Na got together in the sixties and are still performing today.

Gesso is the Italian word for “chalk” and gives its name to the powdered calcium carbonate that is used as a primer coat under artistic panel paintings. The gesso is mixed with a glue and applied to wood so that it acts as an absorbent surface for paint.

“Pro tempore” is a Latin phrase that best translates as “for the time being”. It is used to describe a person who is acting for another, usually a superior. The President pro tempore of the US Senate is the person who presides over the Senate in the absence of the Vice President of the US.

The Runnin’ Utes are the basketball team of the University of Utah. The team was given the nickname the Runnin’ Redskins back when Jack Gardner was the head coach from 1953 to 1971. The “Runnin'” part of the name was chosen because Gardner was famous for playing quick offenses. The “Redskins” name was later dropped in favor of the less controversial “Utes”.

The Distinguished Service Order (DSO) is a British military award that is usually presented to officers with the rank of Major or higher.

Maya Angelou is an African-American autobiographer and poet. Angelou recited her poem “On the Pulse of Morning” at the inauguration of President Clinton in 1983.

Robin Cook is novelist from New York who writes thrillers dealing with medical situations. Cook’s first major novel “Coma” was made into a 1978 feature film directed by Michael Crichton and starring Geneviève Bujold and Michael Douglas. Cook is himself a physician and is currently on leave with the Massachusetts Eye and Ear Infirmary.

Les Nessman is a character in the sitcom “WKRP in Cincinatti”. Nessman is the shy balding guy who always wears a bow tie.

The sport of roller derby has an international footprint, with almost half the world’s teams being located outside of the US. Most of the teams playing the sport are all-female.

Evite.com is a website launched in 1998 that is used to create, send and manage “evites”, online invitations.

A cruet is a small glass bottle for holding a condiment or perhaps a dressing. The word “cruet” comes from the Old French word for an earthen pot.

In football, a horse-collar tackle is a now-illegal move in which the tackling player pulls down on the back of the collar of his opponent, using his weight to drag the player to the ground.

The country now known as Zimbabwe started out as a British colony called Southern Rhodesia, and later just “Rhodesia”. The original colony was named for Cecil Rhodes, the British empire builder.

Midori Ito is a Japanese figure skater. Ito was the first woman to land a triple/triple jump and a triple axel in competition. In fact she landed her first triple jump in training when she was only 8 years old …

5…Use the good china, say..DINE

24…Top-of-the-line, and what each of the four longest puzzle answers begins with?..HIGH-END