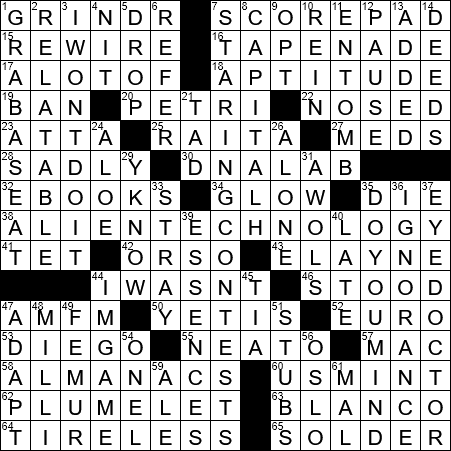 Grindr is a social networking app aimed at gay and bisexual men. Subscribers locate potential partners using the geolocation capabilities of smartphones. A user in a particular location can view a grid showing pictures of fellow subscribers arranged by proximity.

Raita is a condiment served in Indian restaurants that is made from yogurt flavored with coriander, cumin, mint and cayenne pepper.

“Smallfoot” is a 2018 computer-animated film that is based on a children’s book “Yeti Tracks” by Sergio Pablas. The storyline features many a yeti (bigfoot), and a human (smallfoot).

The University of California, San Diego (UCSD) is located in La Jolla. The school was founded in 1960 as the Scripps Institution of Oceanography. Appropriately enough, UCSD’s athletic teams are known as the Tritons, and the school mascot is King Triton.

In many cases, the name given to a type of pasta comes from its shape. However, the name macaroni comes from the type of dough used to make the noodles. Here in the US, macaroni is usually elbow-shaped tubes, but it doesn’t have to be.

36 “Learning [is] the kind of __ distinguishing the studious”: Bierce : IGNORANCE

Milli Vanilli famously won a Grammy and had it revoked when it was discovered that they didn’t even provide the lead vocals for the award-winning recording, and just lip-synced when performing on stage.

The thigh bone, the femur, is the longest and strongest bone in the human body.

The Storting is the Norwegian parliament and is located in Oslo, Norway’s capital city. The Storting differs in structure from say the US Congress and the British Parliament in that is unicameral, has only one legislative chamber.