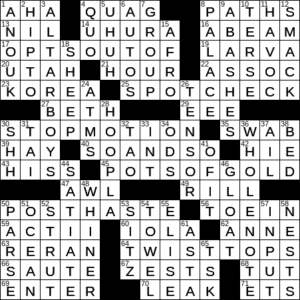 Themed answers each start with a TWISTED, an anagram of, “TOPS”:

Lt. Nyota Uhura is the communications officer in the original “Star Trek” television series, and is played by Nichelle Nichols. The role is significant in that Uhura was one of the first African American characters to figure front and center in US television. In a 1968 episode, Kirk (played by William Shatner) and Uhura kiss, the first interracial kiss to be broadcast in the US. Apparently the scene was meant to be shot twice, with and without the kiss, so that network executives could later decide which version to air. William Shatner claims that he deliberately ran long on the first take (with the kiss) and fluffed the hurried second take (without the kiss), so that the network would have no choice.

The larva is an intermediate stage in the development of an insect. All four stages are embryo, larva, pupa and imago. “Larva” is a Latin word that can translate as “mask”. The term is used in the context of insects as the larval stage can “mask” the appearance of the adult.

A leprechaun is a mischievous fairy of Irish folklore. Traditionally, leprechauns spend their days making shoes and hide all their money in a pot of gold at the end of a rainbow. Our word “leprechaun” comes from the Irish name for such a sprite, i.e. “leipreachán”.

We use the adverb “posthaste” to mean “speedily”. Back as far as the mid-1500s, the phrase “post haste” was written on letters (post) that were to be delivered without delay. The suggestion is that our modern term comes from this original usage.

“Lickety-split” is the latest in a line of terms that come from the word “lick”, which was used in the sense of a “fast sprint in a race” back in the early 1800s. From “lick” there evolved “licketie”, “lickety-click”, “lickety-cut” and finally “lickety-split”, all just colorful ways to say “fast”.

In the world of car maintenance, “toe” is also known as “tracking”, the angle a wheel makes relative to the longitudinal axis of the vehicle.

Iola is a city in southeast Kansas. The city is named for Iola, wife of J. F. Colburn, one of the owners of the land that was chosen as a site for the town in the late 1850s.

Anouk Aimée is a French film actress. Aimée’s most famous film outside of France is probably the internationally successful 1966 French hit “A Man and a Woman”, in which she played the female lead.

Our word “palace” ultimately comes from the name of Rome’s Palatine Hill, “Mons Palatinus” in Latin. The original “palace” was the house of Augustus Caesar, which stood on the Palatine Hill.

Where I grew up, a whole note is called a semibreve, and a half note is a minim.

A board is a piece of sawn lumber that is significantly longer than it is wide. Centuries ago, the term “board” was extended to mean “table”, and later “meals served on a table”. That’s where we get our phrase “bed and board” meaning “food and a place to sleep”.

The Arctic Ocean is in the north polar region, and is almost completely covered by sea ice in the winter. I think it’s common knowledge that the amount of sea ice covering the Arctic Ocean during the summer has been dropping in recent times, as a consequence of climate change.

The earliest known mention of the name “Atlantic”, for the world’s second-largest ocean, was in ancient Greece. The Greeks called said ocean “the Sea of Atlas” or “Atlantis thalassa”.

A sitz bath is one in which the water comes up to the hips. It is usually a therapeutic bath used to treat discomfort in the lower part of the body. The term comes from the German “Sitzbad” meaning a bath (“bad”) in which one sits. “Sitzen” is German for “to sit”.

“Für Elise” is a beautiful piece of solo piano music by Beethoven that is also known as “Bagatelle in A Minor”. “Für Elise” simply means “For Elise”, but sadly no one knows for sure the identity of the mysterious dedicatee.