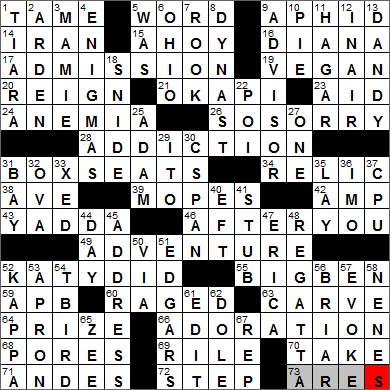 Today’s Wiki-est, Amazonian Googlies
Across
5. Scrabble play WORD
The game of Scrabble has been around since 1938, the invention of an architect named Alfred Mosher Butts. Butts determined the optimum number of tiles for each letter and the appropriate point value of each tile by analyzing letter distributions in publications like the “New York Times”.

9. Rose petal pest APHID
Aphids are called “greenfly” back in the British Isles where I come from. The most effective way to control aphids in my experience is to make sure there are plenty of ladybugs in the garden (called “ladybirds” in Ireland!).

14. Persian Gulf country IRAN
Before 1935 the country we know today as Iran was called Persia by the Western world. The official name of the country since the Iranian Revolution of 1979 is the “Islamic Republic of Iran”.

16. Ross of the Supremes DIANA
Diana Ross is one of the most prolific recording artists in history. She sang with the Supremes from 1959 to 1970 and then launched an incredibly successful solo career. Ross was listed in the 1993 edition of “The Guinness Book of World Records” as the most successful music artist ever, with eighteen #1 records.

19. Tofurky eater at Thanksgiving, perhaps VEGAN
Tofurky is the brand name of a turkey “replacement” made from wheat protein and tofu. I am a vegan and have tried Tofurky, and it is disgusting …

21. Giraffe kin OKAPI
The okapi is closely related to the giraffe, although it does have markings on its legs and haunches that resemble those of a zebra. The okapi’s tongue is long enough to reach back and wash its eyeballs, and can go back even further to clean its ears inside and out.

24. Blood disorder that causes weakness ANEMIA
The term “anemia” (or “anaemia” as we write it back in Ireland) comes from a Greek word meaning “lack of blood”. Anemia is a lack of iron in the blood, or a low red blood cell count. Tiredness is a symptom of the condition.

42. It pumps up the band’s volume AMP
An electric guitar, for example, needs an amplifier to take the weak signal created by the vibration of the strings and turn it into a signal powerful enough for a loudspeaker.

55. London chimer BIG BEN
Big Ben is the name commonly used for the large bell in the Clock Tower of the Palace of Westminster (aka the Houses of Parliament). Big Ben’s official name is the Great Bell, and there is some debate about the origins of the nickname. It may be named after Sir Benjamin Hall who oversaw the bell’s installation, or perhaps the English heavyweight boxing champion of the day, Benjamin Caunt.

59. LAPD broadcast APB
An All Points Bulletin (APB) is a broadcast from one US law enforcement agency to another.

The Los Angeles Police Department (LAPD) is the third largest local law enforcement agency in the country, after New York PD and Chicago PD. Among other things, LAPD is famous for creating the first Special Weapons and Tactics (SWAT) team in the US, in 1965.

71. Chilean mountains ANDES
The Andes is the longest continuous chain of mountains in the world, running right down the length of the west coast of South America for about 4,300 miles. The highest peak in the range is Mt. Aconcagua, at an elevation of 22,841 feet. Interestingly, the peak of Mt. Chimborazo in Ecuador is the furthest point on the Earth’s surface from the center of the planet. That’s because of the equatorial “bulge” around the Earth’s “waist”.

73. Greek god of war ARES
The Greek god Ares is often referred to as the Olympian god of warfare, but originally he was regarded as the god of blood-lust and slaughter.

Down
1. Wonder Woman’s headpiece TIARA
Wonder Woman first appeared in print in 1941, published by DC Comics. As she was created during WWII, Wonder Woman’s first foes were the axis powers. In the less realistic world her biggest foe was and still is Ares, named for the Greek mythological figure.

3. She liked Ike MAMIE
Mamie Eisenhower has to have been one of the most charming of all the First Ladies of the United States. Ms. Eisenhower suffered from an inner ear complaint called Ménière’s disease which caused her to lose her balance quite often. Because she was unsteady on her feet there were unfounded rumors floating around Washington that Ms. Eisenhower had a drinking problem. People can be very unkind …

5. “Kilroy __ here” WAS
The omnipresent doodle and graffiti “Kilroy was here” dates back to WWII, although the exact origins are in doubt. A similar character exists in other countries, with a different name. In Australia, “Foo was here” and in Britain “Chad was here”. It’s felt that Chad might have been the original, and he probably pre-dated the Second World War.

6. Toledo’s state OHIO
Toledo, Ohio lies in the northwest of the state, at the western end of Lake Erie. Toledo was founded as a result of the prosperity that hit the area when the Miami and Erie Canal was constructed in the 19th century connecting Cincinnati to the Great Lakes.

7. Chess piece that can’t move diagonally ROOK
The corner piece in the game of chess is a called a rook, a word coming from the Persian word “rokh” meaning a “chariot”. The rook has also been called, perhaps incorrectly, the castle, tower, marquess and rector.

10. Place for 24 blackbirds, in verse PIE
“Sing a Song of Sixpence” is an English nursery rhyme that dates back to the 1700s. In the rhyme there are a couple of lines that go :

11. Comics Viking HAGAR
“Hagar the Horrible” is a comic strip that was created by the late Dik Browne and is now drawn by his son, Chris Browne. “Hagar the Terrible” (not “Horrible”) was the nickname given to Dik by his sons.

12. “… bombs bursting __” IN AIR
The words “bombs bursting in air” come from “The Star-Spangled Banner” written by Francis Scott Key.

13. “Yankee Doodle __” DANDY
“Yankee Doodle Dandy” is the musical biopic about the life of George M. Cohan, released in 1942. Jimmy Cagney of course plays the part of Cohan, a fitting choice as Cagney started his career as a song-and-dance man, just like Cohan. There is a palpable, patriotic feel to the film, something that is very deliberate. Production of the film was just a few days underway at the end of 1941 when the Japanese attacked Pearl Harbor. The cast and crew met soon after the attack, and resolved that their movie would be uplifting and patriotic.

22. Luau dish POI
I am a big fan of starch (being an Irishman I love potatoes). That said, I think that poi tastes horrible! Poi is made from the bulbous tubers (corm) of the taro plant by cooking the corm in water and mashing it until the desired consistency is achieved.

25. West who played Batman ADAM
Adam West is the actor who played the title role in the sixties TV series “Batman”. These days you might hear him as the voice of a character called “Adam West” on the animated show “Family Guy”. Back in 1970, West was offered the role of James Bond in the movie “Diamonds are Forever”, but he turned it down!

29. Simpson judge ITO
Judge Lance Ito came in for a lot of criticism for his handling of the O.J. Simpson murder trial. The lead prosecutor in that trial was Marcia Clark, you might recall. I read the book that’s Clark wrote about the trial called “Without a Doubt”, and she pointed out one trait of Judge Ito that I think is quite telling. Ito would almost always refer to the prosecutor as “Marcia”, while addressing the men on both sides of the case as “Mister”.

31. Miami’s Biscayne __ BAY
Biscayne Bay is a lagoon in South Florida on the Atlantic coast.

37. PC brain CPU
The Central Processing Unit (CPU) is the main component on the “motherboard” of a computer. The CPU is the part of the computer that carries out most of the functions required by a program. Nowadays you can get CPUs in everything from cars to telephones.

40. Baby newt EFT
Newts wouldn’t be my favorite animals. They are found all over the world living on land or in water depending on the species, but always associated with water even if it is only for breeding. Newts metamorphose through three distinct developmental stages during their lives. They start off as larvae in water, fertilized eggs that often cling to aquatic plants. The eggs hatch into tadpoles, the first developmental form of the newt. After living some months as tadpoles swimming around in the water, they undergo another metamorphosis, sprouting legs and replacing their external gills with lungs. At this juvenile stage they are known as efts, and leave the water to live on land. A more gradual transition takes place then, as the eft takes on the lizard-like appearance of the adult newt.

47. Novelist Jong ERICA
The author Erica Jong’s most famous work is her first: “Fear of Flying”, a novel published in 1973. Over twenty years later she wrote “Fear of Fifty: a midlife memoir”, published in 1994.

48. Yachting race REGATTA
The word “regatta” is Venetian dialect and was originally used to describe boat races among the gondoliers of Venice on the Grand Canal back in the mid-1600s.

51. Awards for mystery writers EDGARS
The Edgar Allan Poe Awards (the Edgars) are presented annually by the Mystery Writers of America.

52. Phi Beta __ KAPPA
Phi Beta Kappa was the first collegiate Greek fraternity in the US, founded in 1776 at the College of William and Mary. The initials Phi Beta Kappa stand for “philosophia biou kybernētēs”, which translates into “philosophy is the guide of life”.

54. Car daddy took away, in a Beach Boys song T-BIRD
The Beach Boys are very much a family group. The initial lineup was Brian, Dennis and Carl Wilson (brothers), Mike Love (a cousin) and Al Jardine (a family friend). The Beach Boys had more Top 40 hits than any other American rock band, a grand total of 36.

65. Alphabet ender ZEE
The letter named “zed” has been around since about 1400, and derives from the Greek letter zeta. The spelling and pronunciation of “zee” used in America today first popped up in the 1670s.