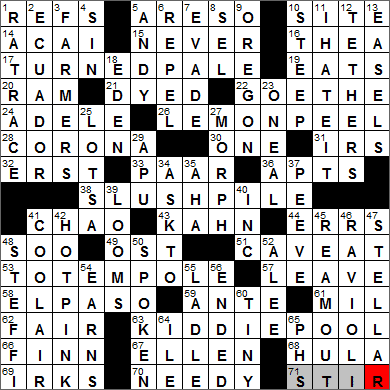 CROSSWORD SETTER: C.C. Burnikel
THEME: Vowel Sounds … each of the five themed answers end with a four-letter word starting with P followed by a vowel-sound and ending with an L-sound. The vowel sounds progress from A to U from top to bottom:

17A. Lost color in one’s cheeks TURNED PALE (A)
26A. Bartender’s twist LEMON PEEL (E)
38A. Stack of unsolicited manuscripts SLUSH PILE (I)
53A. Tribal carving TOTEM POLE (O)
63A. It may be filled with a garden hose KIDDIE POOL (U)

Today’s Wiki-est, Amazonian Googlies
Across
14. Berry in healthy smoothies ACAI
Açaí is a palm tree native to Central and South America. The fruit has become very popular in recent years and its juice is a very fashionable addition to juice mixes and smoothies.

16. Jazz classic “Take __ Train” THE A
The A Train in the New York City Subway system runs from 207th Street, through Manhattan and over to Far Rockaway in Queens. The service lends its name to a jazz standard “Take the ‘A’ Train”, the signature tune of Duke Ellington and a song oft performed by Ella Fitzgerald. One version of the lyric is:

You must take the A Train
To go to Sugar Hill way up in Harlem
If you miss the A Train
You’ll find you’ve missed the quickest way to Harlem
Hurry, get on, now, it’s coming
Listen to those rails a-thrumming (All Aboard!)
Get on the A Train
Soon you will be on Sugar Hill in Harlem.

19. Greasy spoon grub EATS
“Greasy spoon” is a familiar term for a restaurant, usually a diner, that is less than pristine and that serves cheap food.

21. Like blue hair DYED
Apparently, the popularity of a blue rinse with older women is driven by a reduced ability to see the color blue with age. As a result, to older eyes hair might seen to have a yellow tinge. The color of the blue rinse cancels out the perceived yellow.

22. “Faust” dramatist GOETHE
Johann Wolfgang von Goethe was a German writer (among other things). His most famous work is probably his play “Faust”. This epic work was published in parts, starting in 1808. The work was only published in toto after his death in 1832.

24. Fred’s dancing sister ADELE
As you may well know, Fred Astaire’s real name was Frederick Austerlitz. Fred was from Omaha, Nebraska and before he made it big in movies, he was one half of a celebrated music hall act with his sister Adele. The pair were particularly successful in the UK, and Adele ended up marrying into nobility in England, taking the name Lady Charles Cavendish.

28. Beer to drink on Cinco de Mayo CORONA
The Mexican beer called Corona is the biggest-selling imported beer in the United States.

31. Tax agcy. IRS
The Internal Revenue Service (IRS) was set up during the Civil War to raise money to cover war expenses. Prior to the introduction of income tax in 1862, the government was funded by levies on trade and property.

33. Talk show pioneer Jack PAAR
Jack Paar was most famous as the host of “The Tonight Show”, from 1957 to 1962. When he died in 2004, “Time” magazine wrote that Paar was “the fellow who split talk show history into two eras: Before Paar and Below Paar”. Very complimentary …

41. Bush secretary of labor Elaine CHAO
When President George W. Bush appointed Elaine Chao as Secretary of Labor, he made a bit of history as Chao then became the first Chinese American in history to hold a cabinet post. It turned out that Chao became the only cabinet member to hold her post for President Bush’s full eight years in office. In 1993, Chao married Mitch McConnell, the Republican Leader of the US Senate.

Madeline Kahn was an American actress best known for her comedic roles, especially those directed by Mel Brooks.

48. U.S./Canada’s __ Canals SOO
In the summer of 2010 I spent a very interesting afternoon watching ships make their way through the Soo Locks and Soo Canal between Lake Superior and the lower Great lakes. The name “Soo” comes from the US and Canadian cities on either side of the locks, both called Sault Ste. Marie.

Cologne is the fourth largest city in Germany, and is called “Koln” in German.

51. Buyer’s “beware” CAVEAT
“Caveat emptor” is a Latin expression meaning “Let the buyer beware”. It is used when someone buys something, emphasizing that after the deal is closed, there’s no going back.

53. Tribal carving TOTEM POLE
Totem is the name given to any entity that watches over a group of people. As such, totems are usually the subjects of worship. So, “totem” poles are really misnamed as the poles are not intended to represent figures to be worshiped, but rather are heraldic in nature often celebrating the legends or notable events in the history of a tribe.

58. City on the Rio Grande EL PASO
The Mexican city sitting across the border from El Paso is called Ciudad Juarez, often just “Juarez”. Juarez used to be called El Paso del Norte (the North Pass). It was to be the younger settlement on the northern side of the Rio Grande that would retain the “El Paso” name.

59. Feed the kitty ANTE
The “pot” in a card game has been referred to as the kitty since the 1880s. It’s not certain how the name “kitty” evolved but possibly it came from “kit”, the necessary equipment for the game.

66. Helsinki resident FINN
Helsinki is the capital city of Finland, and is by far the country’s biggest urban area. In English we tend to stress the “-sink-” in “Helsinki”, whereas the Finns stress the “Hel-”.

67. Actress Burstyn ELLEN
Ellen Burstyn is a wonderful actress from Detroit, Michigan. My favorite Burstyn performance is in the 1978 movie “Same Time, Next Year” opposite Alan Alda. Actually, she had appeared since 1975 in the original stage play that inspired that film. On stage, Burstyn acted opposite Charles Grodin in “Same Time, Next Year”, and won a Tony for her performance.

68. Hip-swiveling dance HULA
Hula is the name of the Polynesian dance. The chant or song that the dance illustrates, that’s known as the mele.

71. Ruin Bond’s martini STIR
Why have a vodka martini shaken and not stirred (as does James Bond, 007)? Well, for one thing the shaken drink tends to be colder. And with more melted ice in the drink, it isn’t as strong. These are my personal observations … no need to write in …

Down
2. Besides Chile, the only South American country that does not border Brazil ECUADOR
“Ecuador” is the Spanish word for “equator”, which gives the country its name.

5. “Toy Story” boy ANDY
1995’s “Toy Story” was the world’s first feature-length computer-animated movie. “Toy Story” was also the studio Pixar’s first production. The main roles in the film are Woody and Buzz, voiced by Tom Hanks and Tim Allen respectively. Hanks was the first choice to voice Woody, Allen was asked to voice Buzz after Billy Crystal turned down the role.

The Somme is a department in the very north of France, in the Picardy region. The Somme is famous as the site of devastating battles during WWI.

9. Where Nike headquarters is OREGON
Nike is headquartered near Beaverton, just outside Portland, Oregon.

23. “Paper Moon” Oscar winner Tatum O’NEAL
Tatum O’Neal is the youngest actress to win a “competitive” Oscar. She won the Best Supporting Actress Award in 1974 when she was just 10 years old, for her role as Addie in “Paper Moon”. The youngest person to win an honorary Academy Award was Shirley Temple, who was only 5 years old when she was presented with an Oscar in 1934.

29. Kwik-E-Mart owner on “The Simpsons” APU
The fictional Kwik-E-Mart store is operated by Apu Nahasapeemapetilon on “The Simpsons” TV show. The convenience store owner doesn’t seem to be making much use of his Ph.D in computer science that he earned in the US. Apu’s undergraduate degree is from Caltech (the Calcutta Technical Institute), where he graduated top of his class of seven million students …

45. Come down hard on REAM OUT
I must admit that I find the slang term “to ream (out)”, with its meaning “to scold harshly”, quite distasteful. The usage of the word as a reprimand dates back to about 1950.

48. Golden Slam winner Graf STEFFI
Steffi Graf is a former World No. 1 professional tennis player from Germany. Graf won 22 Grand Slam singles titles, more than any other man or woman other than Margaret Court. She is married to another former World No. 1, Andre Agassi.

64. French landmass ILE
In French, an island (île) is a piece of ground (terre) surrounded by water (eau).

65. Acidity nos. PHS
As we all recall from chemistry class, a pH of 7 is considered neutral, and water is the primary example of a substance with a pH equal to seven. Anything less than 7 is an acid, and anything above 7 is a base.